No. 47 Hawkeyes to Host Nebraska 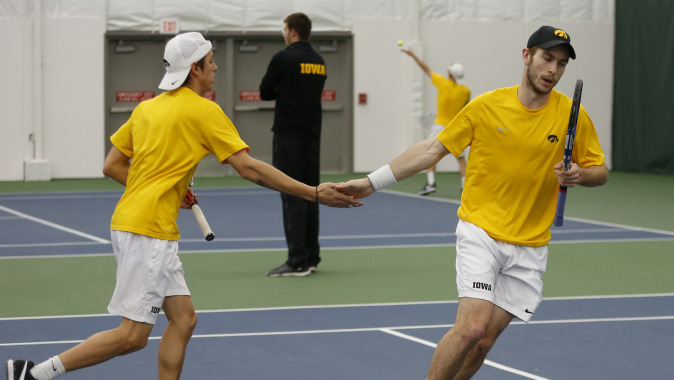 THIS WEEK:
The 47th-ranked University of Iowa men’s tennis team is back home Friday for its first Big Ten match of the season against Nebraska at the Hawkeye Tennis and Recreation Center (HTRC) at 6 p.m. Admission is free to the public.

STRONG AT SIX:
Sophomore Jake Jacoby started the season at No. 5 but after two matches was moved down to the No. 6 spot.

“Jake’s game is tailor made to play down at five and six singles. He makes a lot of balls, he’s a really good athlete and he’s a great competitor,” said UI head coach Ross Wilson.

“He’s able to come into the net and finish points with volleys and over heads.”

Since the move, Jacoby has accumulated an 8-0 record at six this season. Overall, the Arkansas native is 16-5 at the bottom of the line up.

“I feel pride in taking over the six spot and anchoring down the line up,” said Jacoby.

“I think the wins have made me more confident in my game lately but I just try to build off of that and look at every match as a new one.”

DAILY DOUBLE:
The Iowa doubles team of Jacoby and fellow sophomore Lefteris Theodorou are ranked No. 78 in the nation in the latest Oracle/ Intercollegiate Tennis Association rankings. The pair has played at No. 1 all season and will take the court Friday with a 6-3 record on the year.

“Jake is able to ride the highs with him but then he also doesn’t allow Lefty to get too low and I think that’s been something that has been really good in their partnership.”

Last season, the pair played just two matches together, both at No. 3. The two matches were filed under the loss column for the then freshman.

“I think this year we just know what we need to work on and what works well for us as a pair,” said Theodorou.

“Our game styles and mentality are different but I think that works to our advantage.”

SCOUTING THE COMPETITION:
Nebraska enters Friday’s match with a 6-4 record on the season and is 2-1 on the road. The Cornhuskers will be opening their Big Ten season on Friday as well.

Nebraska will bring a ranked doubles team with them to the Hawkeye state. Brothers, Toby and Dusty Boyer currently sit at No. 66 in the nation. The duo is 9-0 on the season.

Last season, the then 72nd-ranked Hawkeyes travelled to Lincoln where they won the match, 4-2. The Hawkeyes have gone 1-3 against Nebraska since the 2012 season when the Huskers were added to the Big Ten.

HEAD COACH Ross Wilson ON NEBRASKA:
“Nebraska is a team that’s one of our rivals, it’s the first match in the Big Ten season, first match at home in Big Ten play, so you always want to start off right with a win but especially winning those home matches when you play in the Big Ten conference is extra important. Also, we’re starting off our spring break trip as well, so to start that off with a win would be nice.”