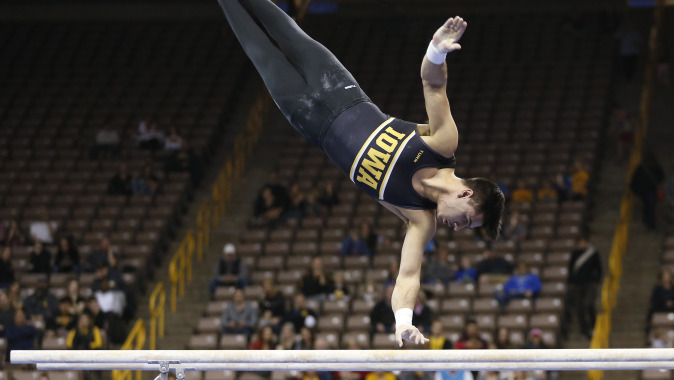 THIS WEEK:
The No. 9 University of Iowa men’s gymnastics team wraps up its regular season on March 20. The tri-meet features Iowa, No. 7 Nebraska and No. 4 Minnesota. The competition begins at 2 p.m. (CT) inside the Bob Devany Sports Center in Lincoln, Nebraska.

FOLLOW ALONG:
Fans can follow this weekend’s meet via live stats available on the team’s schedule page at hawkeyesports.com. A live stream can be found on the Periscope app and linked to the team’s Twitter account (@mensgymiowa).

LAST TIME OUT:
On Senior Night, Iowa recorded its biggest upset of the season, defeating No. 4 Minnesota, 435.650-433.550. Iowa set season best event scores on floor (74.200) and rings (74.450) on its way to a season-high 435.650 team score. Senior Jack Boyle bested his own school record in the all-around of 86.800, tallying a score of 87.600 to lead Iowa. Senior Matt Loochtan placed third in the all-around with an 86.700, setting season highs on floor (15.5000) and rings (15.450). Following the meet Boyle, Loochtan, Cyrus-Dobre-Mofid, Del Vecchio Orozco, Doug Sullivan and Emmanuel Monroy were honored for Senior Night, given framed pictures, and shown highlight videos.

SCOUTING THE COMPETITION:
• The Hawkeyes head to Lincoln, Nebraska, for their season finale against Nebraska and Minnesota.
• Iowa will face Minnesota for the third time in 2016. Iowa is 1-1 against the Gophers, defeating Minnesota in their last matchup on March 12, 435.650-433.550.
• Zach Liebler is ranked first nationally on floor exercise with a four-score average of 15.683.
• Yaroslav Pochinka (15.283) is second in the nation on vault followed by Liebler tied for sixth (15.183).
• Iowa and Nebraska will see each other for the third time this season as well. They have split the season series, 1-1, with Nebraska taking the last matchup at the Arnold Challenge on March 5, 426.400-437-300.
• Ethan Lootman is ranked sixth nationally on pommel horse with a four-score average of 15.150.
• Anton Stephenson is 10th nationally in all-around, holding a four-score average of 86.217.

Boyle, a Naperville, Illinois, native is a mechanical engineering major and two-time Academic All-Big Ten honoree. He is second in the country on high bar with a four-score average of 15.100 and 13th nationally in the all-around (86.000). Boyle leads the team on high bar with a high score of 15.250. He has won four event titles and an two all-around titles so far this season.

FRESHMEN CONTRIBUTORS:
• Three freshmen have found their way into the Iowa lineup this season.
• Jake Brodarzon has competed in every meet for the Hawkeyes this season, making the lineup on floor and parallel bars. He posted season-high scores on floor (14.850) and parallel bars (14.200) on March 12.
• Todd Beyer II has competed for the Hawkeyes four times this season on vault. His best score of 14.900 came at UIC on Jan. 24, where he placed third overall.
• Rogelio Vazquez has competed on three events this season, including rings, parallel bars, and high bar. His high score on rings came against Illinois on Jan. 23, where he posted a 14.550. The next day, Vazquez notched a season-high on parallel bars (13.800), and on March 12 he recorded a seasonhigh 14.200 on high bar.

BIG TEN SHOWS POWER:
The Big Ten Conference has been dominant so far this season. Of the top 10 teams listed on roadtonationals.com, six are from the Big Ten, including No. 3 Ohio State, No. 4 Minnesota, No. 5 Illinois, No. 7 Nebraska, No. 8 Penn State, and No. 9 Iowa.

Cory Paterson COMPETES IN CANADA:
During the Hawkeyes’ off-day on Feb. 6, junior Cory Paterson traveled to Halifax, Nova Scotia, with assistant coach Ben Ketelsen for the 2016 Elite Canada Artistic Gymnastics Championships. Paterson placed seventh in the all-around competition with a 79.100 and third on high bar with a 13.600 effort.