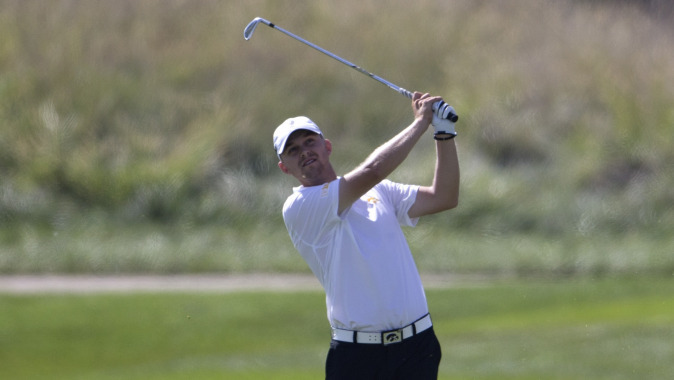 STATESBORO, Ga. — Following Friday’s first round play at Georgia Southern’s annual Schenkel Invitational, the University of Iowa men’s golf team sits in a tie for fourth place after carding a team score of 279 (-9). The three-day, 54-hole event is being played at Forest Heights Country Club in Statesboro, Georgia.

Wake Forest leads the 14-team field after stringing together an opening round 270 (-18). Vanderbilt and Georgia State are tied for second after both carded a 274 (-14).

Coming off a eighth place finish at the Southwestern Jones Invitational, senior Nate Yankovich is off to another solid start this weekend. The Blacklick, Ohio, native led the Hawkeyes in Friday’s opening round, carding a six-under-par 66, which ties for the best 18-hole score of his career. Yankovich sits in a tie for second place on the individual leaderboard after putting together a nearly perfect round of golf. Yankovich made par or better and 17 holes, including seven birdies.

Juniors Raymond Knoll and Carson Schaake are tied for 27th and 36th following Friday’s first round action. Knoll carded a two-under-par 70, while Schaake posted a one-under-par 71.

Sophomore Sam Meuret carded an even par 72 in Friday’s opening round. Meuret made par or better on 14 holes, including an eagle on hole five, to notch his best 18-hole score of the season. Meuret is tied for 46th heading into Saturday’s second round.

Freshman Matthew Walker is tied for 65th at three-over-par 75, while fellow freshman Aaron DeNucci, who is competing as an individual, is tied for 61st after firing a two-over-par 74. DeNucci is competing in his first stroke play event of the spring season.

Second round play at the Schenkel Invitational begins on Saturday morning with tee times starting at 8 a.m. (CT). Live scoring is available at golfstat.com.