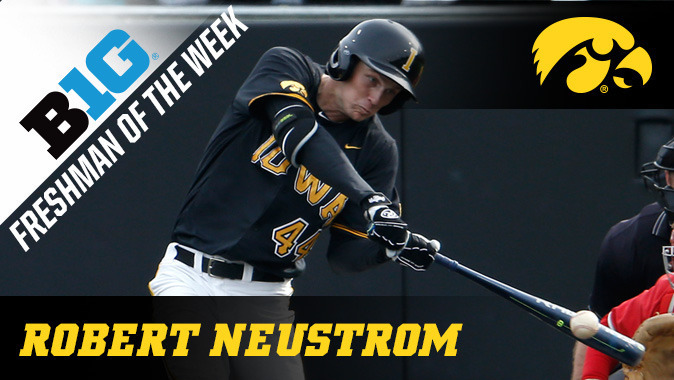 IOWA CITY, Iowa — University of Iowa outfielder Robert Neustrom has been named the Big Ten Freshman of the Week, it was released Monday by the league office. It is Neustrom’s first career honor and the Hawkeyes’ second accolade this season.

The Sioux City, Iowa, native hit .500 (6-of-12) in helping the Hawkeyes to a 3-1 record last week, including taking 2-of-3 games in their Big Ten opening series against Maryland. Neustrom tallied hits in three of Iowa’s four games, including two multi-hit contests. He posted a .667 slugging and .462 on-base percentage in four games.

Neustrom went 2-for-3 with a triple, two RBIs, and a run scored in the Hawkeyes’ 4-1 victory over the Terrapins in the series opener before matching a career high with three hits in a game two victory to clinch the series win. He went 3-for-3 in the contest for his third three-hit game of the season.

For the season, Neustrom is hitting .349 — the third-best average on the team. He has three extra base hits (two doubles and a triple), six runs, and four RBIs. His .442 slugging percentage is four-best on the team.