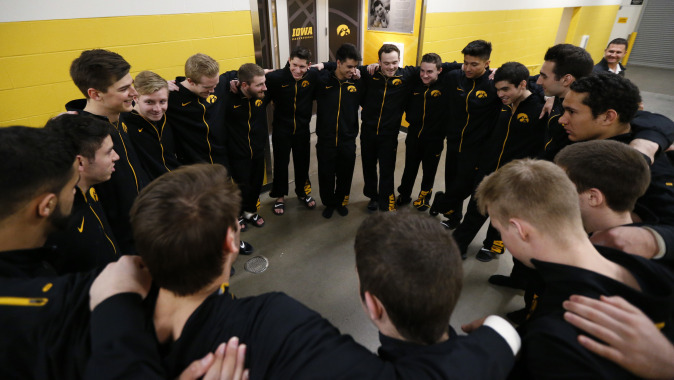 THIS WEEK:
The No. 8-ranked University of Iowa men’s gymnastics team competes in the 2016 Big Ten Championships from April 1-2. The event is hosted by Ohio State in Columbus, Ohio, inside historic St. John Arena. The meet begins at 6 p.m. (CT) on Friday and Saturday.

FOLLOW ALONG:
Fans can follow this weekend’s meet via live stats available on the team’s schedule page at hawkeyesports.com. The competition will be aired on the Big Ten Network on both days.

LAST TIME OUT:
The Hawkeyes finished off the regular season in Lincoln, Nebraska, against Nebraska and Minnesota in what was Iowa’s closest competition this season. Iowa and Nebraska tied for second, tallying scores of 432.450, and Minnesota won the meet with a score of 433.850. Senior Jack Boyle won the event title on high bar, posting a score of 14.900, and sophomore Austin Hodges set a career-high with a 14.450 on the event for 13th place. Junior Mark Springett set a career-high on rings with a 14.700 for fifth place, and senior Matt Loochtan tied his own school record on floor with a 15.650 on his way to claiming the all-around title with a career best 87.700.

BOYLE NAMED FINALIST FOR NISSEN-EMERY:
Senior Jack Boyle is a finalist for the Nissen-Emery Award. This prestigious honor is given to the country’s most outstanding senior gymnast both in the gym and in the classroom. The last Hawkeye to be named a finalist for the award was Jonathan Buese in 2010.

Boyle, a Naperville, Illinois, native is a mechanical engineering major and three-time Academic All-Big Ten honoree. He is fourth in the country on high bar with a four score average of 15.100 and 13th nationally in the all-around (86.000). Boyle leads the team on high bar with a high score of 15.250. He has won five event titles and an two all-around titles so far this season.

Cory Paterson COMPETES IN CANADA:
During the Hawkeyes’ off day on Feb. 6, junior Cory Paterson traveled to Halifax, Nova Scotia, with assistant coach Ben Ketelsen for the 2016 Elite Canada Artistic Gymnastics Championships. Paterson placed seventh in the all-around competition with a 79.100 and third on high bar with a 13.600 effort.

HEAD COACH JD Reive:
JD Reive, the seventh head coach at Iowa, is entering his sixth year at the helm of the program. Reive is looking for continued success following a sixth place finish at the NCAA Championships last year. Reive has led an All-American in each of the past three seasons and has one of the highest team GPA’s at Iowa, tying a program record with nine student-athletes named to the 2016 Winter Academic All-Conference team.