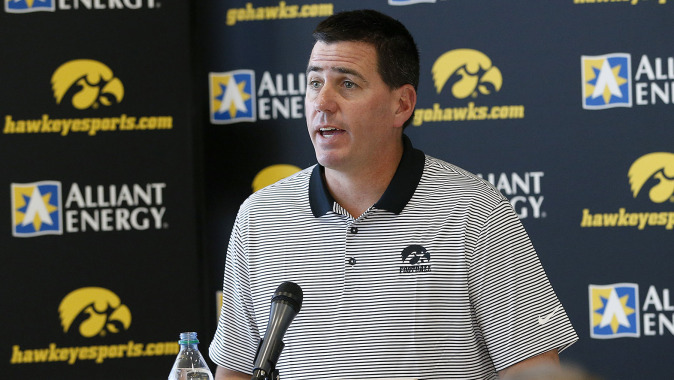 IOWA CITY, Iowa — When Chris White looks at the roster of University of Iowa running backs and fullbacks he sees incumbents and candidates.

The incumbents are at running back, where three of four regulars return. The candidates are at fullback because mainstays Adam Cox and Macon Plewa have graduated.

Leading rusher Jordan Canzeri graduated after gaining 984 yards with 12 touchdowns in 2015. Returning are senior LeShun Daniels, Jr., and juniors Derrick Mitchell, Jr., and Akrum Wadley. Combined, those three ran for 1,304 yards and 17 touchdowns. Mitchell is not participating in spring drills because of offseason surgery.

“We had the opportunity to play four guys (in 2015), and three of them are returning with a lot of experience, minus Jordan at the running back position,” White said Wednesday at a news conference in the Stew and LeNore Hansen Football Performance Center. “We’re going to miss Jordan’s leadership, production, and energy. That void needs to be filled, and hopefully some of these younger guys will step up.”

The goal for Daniels, who has 830 career rushing yards and nine touchdowns, is to stay healthy. He played in seven games as a freshman, five as a sophomore, and 12 as a junior.

“I would like to see what a healthy LeShun Daniels can do throughout a 12 or 13-game season,” White said.

White praised Wadley for maturing on and off the field and understanding his importance to the program. Mitchell is expected to participate in a summer program in June.

Two other running backs with limited or no game experience are sophomore Marcel Joly and freshman Eric Graham. Joly carried the ball twice for 13 yards; Graham sat out as a red-shirt.

White called Cox and Plewa “the heartbeat of our offense” in 2015 because of their physicality. Junior Drake Kulick saw action last season primarily on special teams. He carried the ball three times for eight yards and caught a pass for 22.

“I was concerned going into spring, but I the last week or two, all of them have gone in there and struck a match on some of those linebackers,” White said. “You know, the fullback position is so hazardous and they get absolutely no love, no sugar. They get maybe a ball in the backfield in a flat route every once in a while. But their teammates love it when they go in there and just light up a linebacker.

“Our running game wouldn’t be the same without the fullbacks like we’ve had here. These guys are going to be just as good. We won’t miss a beat. They are going to be good players.”

White said the placekicking battle might not be decided until game day Sept. 3 against Miami (Ohio).

“The snap, the hold, all those things need to be really grooved up,” White said. “We’re getting there, but it’s going to be a process, as well as the punting situation.”

The spring depth chart has sophomores Mick Ellis and Miguel Recinos at kicker and freshmen Ben Canby and Colten Rastetter at punter.

The return of Desmond King provides a boost to the Hawkeye return game. In his first season as a returner in 2015, King averaged 24.4 yards on 29 kickoffs and 14.2 yards on 17 punts, but White said, “I don’t think he has scratched the surface of how good he can be.”

Sophomores Adrian Falconer, Josh Jackson, and Jerminic Smith continue to be involved in the return game.

“I feel good about where the (2016) team is right now and we’re not looking back,” White said. “We’re trying to build. The chemistry is starting to develop, the kids are hungry, and we’re going to make sure they stay hungry and humble and we’re going to keep grinding.”

Earlier Wednesday, Iowa completed its 10th of 15 spring practices and for the first time the Hawkeyes were inside Kinnick Stadium. An open practice is scheduled for April 23 at 1 p.m. (CT) in Kinnick Stadium.