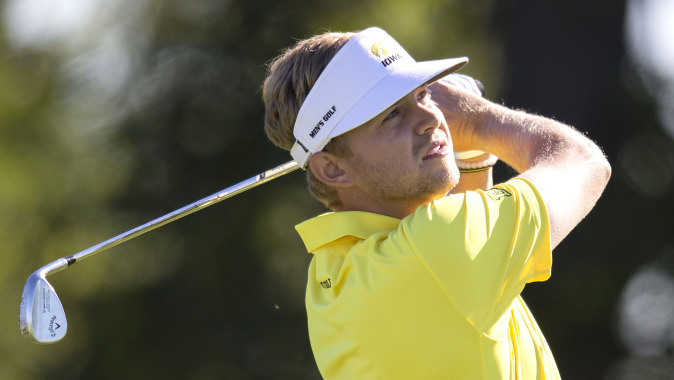 THE COURSE
Home to both the Iowa men’s and women’s golf teams, Finkbine Golf Course is prized by the University and Iowa City community alike. A tremendous test of skill, this scenic golf course stretches over 7,200 yards of rolling Iowa terrain, and plays to a par 72 with a USGA course rating of 74.6 and slope rating of 134. Finkbine has been the home to numerous NCAA tournaments plus the Amana VIP Classic, the 1991 Hogan Tour, and 1992 and 1993 Nike Tour Hawkeye Classic Tournaments. More recently, the course has hosted the 2010 Iowa State Women’s Amateur, 2013 Iowa Match Play and 2014 Iowa State Men’s Amateur.

THE LINEUP
All seven Hawkeyes will be competing at this weekend’s Hawkeye Invitational. At the top of the Hawkeye lineup in the number one spot is freshman Matthew Walker followed by junior Raymond Knoll. Senior Nate Yankovich, junior Carson Schaake, and sophomore Sam Meuret round out the Iowa lineup. Senior Voramate Aussarassakorn and freshman Aaron DeNucci will both be competing as individuals.

TOURNAMENT HISTORY
Iowa has endured its fair share of success at the Hawkeye Invitational, winning 14 times in the events 22-year history. The Hawkeyes have won the event four times in the last six years, with their most recent title coming in 2014. Led by Steven Ihm, who captured his second consecutive Hawkeye-GRE Invitational title at 209 (-7; 69, 71, 69), Iowa was crowned tournament champions of the 2014 Hawkeye Invitational. In last year’s event, the Hawkeyes took third place after carding a 54-hole team total of 853 (-11; 284, 280, 289). All five Hawkeyes finished in the top-25 individually, led by Carson Schaake who tied for fourth at 210 (-6; 73, 66, 71).

LAST TIME OUT
The Hawkeyes took fifth place at the ASU Thunderbird Invitational two weeks ago. Iowa carded an 839 (-13; 277, 277, 285) at the two-day tournament, marking the lowest 54-hole score of the season and Iowa’s third-best 54-hole score since 1985. Three Hawkeyes recorded top-20 finishes at the ASU Thunderbird, led by freshman Matthew Walker who capped off a career weekend with a third-round 70 (-1). The Ottumwa, Iowa, native finished below par in all three rounds, including a career-best 67 (-4) in the second round, on his way to a seventh place finish at 206 (-7; 69, 67, 70) — the best finish of his career.

OFF THE FIRST TEE
? Senior Nate Yankovich leads the Hawkeyes, averaging a career-best 72.24 strokes per round this season. Junior Carson Schaake finished with the second-best stroke average in program history last year (71.17).
? Junior Raymond Knoll has been Iowa’s top finisher two times this season, which includes his first collegiate title at the GolfWeek Conference Challenge.
? Iowa’s best finish of the season came at the GolfWeek Conference Challenge. The Hawkeyes took home the tournament title with a 54-hole 842 (-22). ? Iowa carded its lowest 54-hole total of the season last weekend at the ASU Thunderbird Invitational. The Hawkeyes put together a three-round 839 (-13; 277, 277, 285) which marks Iowa’s third lowest 54-hole score since 1985.
? Iowa’s lowest round of the season came in the second round of the GolfWeek Conference Challenge (273; -15). Yankovich and Schaake both carded a six-under-par 66 to pace the Hawkeyes.
? Knoll and Yankovich are tied with a team-best nine rounds of at or below par golf this season. Schaake is right behind with eight of his own. As a team, the Hawkeyes have notched 37 rounds of at or below par golf this season.

A TEAM WITH DEPTH
This season, five Hawkeyes have combined for seven top-10 individual finishes. Senior Nate Yankovich and junior Carson Schaake lead the team with two apiece. Yankovich’s best finish came at the GolfWeek Conference Challenge where he tied for fifth, while Schaake’s came at the David Toms Intercollegiate after tying for fourth. Junior Raymond Knoll — the GolfWeek Conference Challenge co-medalist — and sophomore Sam Meuret, and freshman Matthew Walker have each notched one top-10 finish.

LOOKING AHEAD
The Hawkeyes begin postseason play on April 22-24 at the 2016 Big Ten Tournament. The three-day, 72-hole tournament will be played at Victoria National Golf Club in Newburgh, Indiana.