Hawkeyes to Compete at B1G Championships 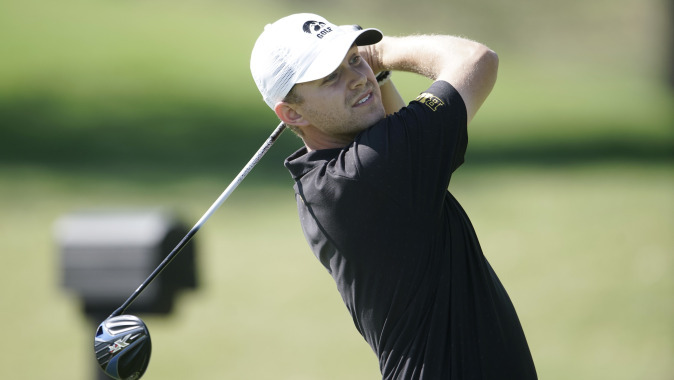 THIS WEEK
The University of Iowa men’s golf team begins postseason play this weekend at the Big Ten Championship. The three-day, 54-hole tournament begins on Friday and will be played at the nationally renowned Victoria National Golf Club in Newburgh, Indiana.

BROADCAST ON BTN
The Big Ten Men’s Golf Championship will appear on the Big Ten Network on tape-delay at 11 a.m. (CT) on Sunday, May 1.

THE FIELD
All 14 members of the Big Ten Conference will be competing at this weekend’s Big Ten Championship. Four conference schools are ranked in the top 50 of the GolfWeek/Sagarin rankings, led by second-ranked Illinois, last year’s Big Ten Tournament Champion. Other top 50 Big Ten schools include, Penn State (30), Purdue (31), and Michigan State (46).

THE LINEUP
This weekend’s Hawkeye lineup is yet to be determined.

TOURNAMENT HISTORY
Iowa has notched top three finishes in each of the last three Big Ten Championships, including a second place finish at last year’s event. Carson Schaake led the Hawkeyes in last year’s event, becoming just the third Hawkeye in program history to claim medalist honors and the first since Brad Klapprott in 1992. Schaake’s 72-hole 284 (-4) was highlighted by a seven-under-par 65 in the opening round of the tournament, the best 18-hole score of his career. Iowa’s first Big Ten medalist was John Jacobs in 1946, and its lone Big Ten title came in 1992.

LAST TIME OUT
The Hawkeyes tied for second place at their own Hawkeye Invitational last weekend. Iowa carded an 858 (-6; 290, 288, 280) at the two-day, 54-hole event. Three Hawkeyes recorded top 13 finishes, led by senior Nate Yankovich, who capped off a career weekend with a third place finish at six-under-par 210 — the best finish of his career. Yankovich finished below par in all three rounds and was in the top three of the leaderboard throughout the entire weekend. Juniors Carson Schaake and Raymond Knoll tied for 10th and 13th, respectively.

YANKOVICH HAVING BIG SENIOR YEAR
Senior Nate Yankovich is having the best season of his Hawkeye career this year. The Blacklick, Ohio, native has produced three top 10 finishes this season after only having two total in the previous three seasons combined. Last weekend’s third place finish at the Hawkeye Invitational marked the best finish of his career. Yankovich is also averaging 71.96 strokes per round this year, which leads the team and is 3.33 strokes better than last year’s average. The 2015-16 season has seen Yankovich card the best 18-hole and 54-hole scores of his career. Yankovich has carded a six-under-par 66 two different times this season with the most recent coming in the middle of March at the Schenkel Invitational. His best 54-hole score came in the fall at the GolfWeek Conference Challenge where he fired a 209 (-7).

OFF THE FIRST TEE
•Senior Nate Yankovich leads the Hawkeyes, averaging a career-best 71.96 strokes per round this season. Junior Carson Schaake finished with the second-best stroke average in program history last year (71.17).

•Junior Raymond Knoll has been Iowa’s top finisher two times this season, which includes his first collegiate title at the GolfWeek Conference Challenge back in September.

•Iowa’s best finish of the season came at the GolfWeek Conference Challenge. The Hawkeyes took home the tournament title with a 54-hole 842 (-22).

•Iowa’s lowest round of the season came in the second round of the GolfWeek Conference Challenge (273; -15). Yankovich and Schaake both carded a six-under-par 66 to pace the Hawkeyes.

A TEAM WITH DEPTH
This season, five Hawkeyes have combined for nine top 10 individual finishes. Senior Nate Yankovich and junior Carson Schaake lead the team with three apiece. Yankovich’s best finish came last weekend at the Hawkeye Invitational where he notched a career-best third place finish, while Schaake’s came in the fall at the David Toms Intercollegiate after tying for fourth. Junior Raymond Knoll — the GolfWeek Conference Challenge co-medalist — and sophomore Sam Meuret, and freshman Matthew Walker have each notched one top 10 finish.