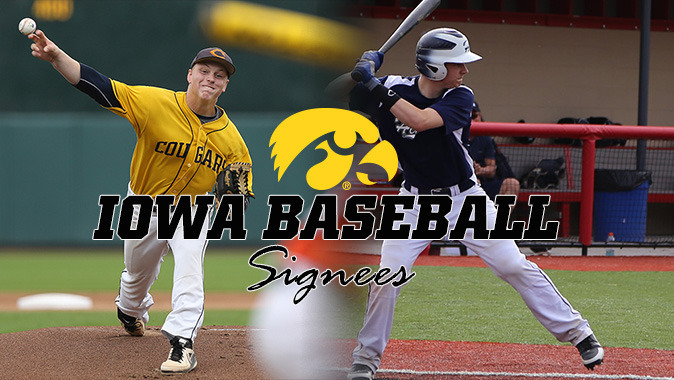 Lieurance, a 6-foot, 180 pound right-handed pitcher from Cascade, Iowa, is 7-0 with a 2.09 ERA in eight appearances (seven starts) as a freshman at North Iowa Area Community College. He has allowed 12 runs (nine earned) in 38 2/3 innings and has 55 strikeouts to 19 walks. He averages 12.80 strikeouts per nine innings.

“We are happy that Derek has chosen to be a Hawkeye,” said Heller. “He has had a great year at NIACC so far, and we feel he will have a big role on our pitching staff next year. Derek is a great athlete with a good arm who knows how to compete. We are excited to have him in our program.”

Kinzer, a 6-1, 195 pound catcher from Port Washington, Wisconsin, was rated as the No. 2 catcher in Wisconsin by Prep Baseball Report. He hit .389 with eight home runs as a junior at Port Washington High School.

Kinzer is a top 500 recruit by Perfect Game and was a 2016 honorable mention All-American by Rawlings/Perfect Game. He was also a 2016 second-team All-Central Region selection by Rawlings and was a Prep Baseball Report Futures Games invitee in 2014.

“Jack is an excellent catcher with all the tools to be a great college player,” said Heller. “Another strength is his make-up and leadership skills. We are glad Jack will be a Hawkeye and our coaching staff looks forward to working with him.”

The duo joins a recruiting class of 11 that was ranked third-best in the Big Ten Conference by Perfect Game. The now 13-player class consists of three junior college players and 10 top-500 players by Perfect Game.