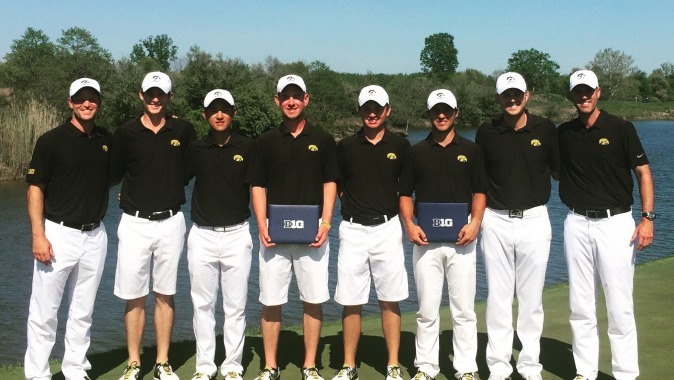 IOWA CITY, Iowa — Thursday morning, the University of Iowa men’s golf team became one of two Big Ten programs to advance to NCAA Regional competition in each of the last eight seasons when it was selected to compete in the Albuquerque Regional in Albuquerque, New Mexico.

“We’re happy about the selection,” said UI head coach Tyler Stith. “I’ve been to this golf course three times and it suits us well. I know the guys are going to enjoy it and we’re all looking forward to the opportunity.”

While the Hawkeyes are happy about the selection, a few short weeks ago they weren’t guaranteed a spot in the postseason.

That was until a big time performance at the Big Ten Championships secured an at-large bid to an NCAA Regionals.

“The last three tournaments have been our best of the spring,” said Stith. “We’ve gotten better each and every week. The guys are playing with a lot of confidence right now and I know they’re excited to get back out and compete again.”

Led by three top 10 finishers, the Hawkeyes captured a second place finish and landed two individuals on the All-Championships Team at this year’s conference tournament. It took a record-breaking performance by second-ranked Illinois in the final round to keep Iowa from winning it all, too.

“I couldn’t be more proud of how we played at Big Tens,” said Stith. “To have three players finish in the top six at the Big Ten Championships is strong.”

“We knew going into the Big Ten Championships just how important it was for us to have a good weekend,” said senior Nate Yankovich, who is enjoying the best season of his Hawkeye career. “Now that we’ve qualified for regionals, the next step is competing for an NCAA title.”

The Hawkeyes are looking to advance to the NCAA Championship finals for the fourth time in eight seasons, but the road to get there isn’t going to be easy. The 14-team field at the Albuquerque Regional includes host New Mexico and four teams ranked in the top 25 of the GCAA Coaches Poll. Headlining the regional is fourth-ranked and top-seeded USC.

“This marks our eighth straight regional appearance and what an honor that is,” said Yankovich. “It’s exciting and we’re all looking forward to heading to New Mexico and putting together three solid rounds of golf.”

The Albuquerque Regional will be held from May 16-18 with the top five teams, along with the top individual not on a qualifying team, advancing to the NCAA Finals at the Eugene Country Club in Eugene, Oregon, from May 27-June 1.