“We certainly didn’t see (a 42-point victory) coming, but it was great that we got off to such a good start and played well,” Iowa head coach Kirk Ferentz said Sunday. “Anytime you can get guys that are in backup roles on the game field playing, it’s a great reward for their hard work and all the effort they put in.”

The first scoring drive for the Hawkeyes was eight plays and covered 75 yards. The second was 10 plays for 74 yards.

“We mixed our play calling well — good run-pass ratio and misdirection, got the ball outside as well as inside,” Ferentz said. “(Quarterback) Spencer (Petras) did a good job leading our offense and running the show.” 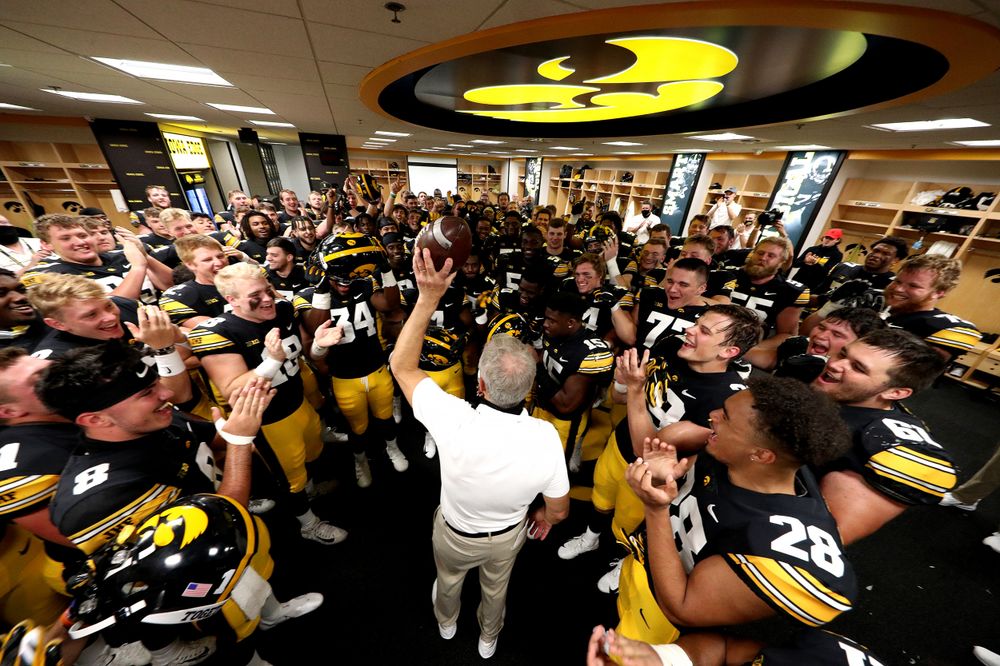 "It was good to see the turnovers, the returns and it was it was good team football and good team defense and that was pleasing."

“Hopefully that trend can continue because we’ve had way too many field goals,” Ferentz said. “Nothing against (kicker) Keith (Duncan), but we would rather see touchdowns instead of field goals.”

On defense, the Hawkeyes limited Michigan State to 12 drives that gained 16-or-fewer yards. Iowa had five quarterback hurries and two sacks for 19 yards.

“Michigan State had done a good job throwing the ball the week before and threw it deep, so you don’t want the quarterback just standing there twiddling his thumbs, waiting for receivers to get open,” Ferentz said. “We got the sacks, but we were disruptive and made (Michigan State quarterback Rocky Lombardi) uncomfortable.”

“It was good to see the turnovers, the returns and it was it was good team football and good team defense and that was pleasing,” Ferentz said.

Perhaps no phase of Iowa’s game excelled more than special teams. Charlie Jones returned five punts 105 yards with a 54-yard touchdown and five of Tory Taylor’s seven punts were downed inside the 20.

“Look at Charlie and Tory together, those are two newcomers,” Ferentz said. “You can never bank on a newcomer having such a positive impact and so far those two guys are been great pluses for us.”

The next challenge for the Hawkeyes is a short preparation week before playing at Minnesota with the traveling trophy Floyd of Rosedale on the line. Iowa has won the last five meetings.

“It was great to win the game Saturday, no question about it, but we have to put that one in the can and move on,” Ferentz said. “We have a big challenge playing Minnesota, it’s a trophy game and a rivalry game, so it’s always a tough battle. We are going to have to have a good week of preparation and be ready for it, but we’re looking forward to our trip to Minneapolis.”

Iowa and Minnesota play Friday with a 6 p.m. kickoff. The game will be televised by FS1.