MINNEAPOLIS — This one goes to 11.

Fans of the movie This is Spinal Tap understand the reference. So do fans of the University of Iowa defense. As far as the Hawkeyes are concerned, 11 is the number of consecutive games with at least one interception. Defensive backs Jack Koerner and Riley Moss extended the streak Friday during a 35-7 win at Minnesota.

Koerner, who returned his second quarter theft to the Gopher 26, said the entire Hawkeye defense came out with a hunger that was kindled by a terrific week of practice. Koerner has an interception in the last three games.

“We’re always trying to get takeaways, we have our defensive goals every week,” Koerner said. “That is a point of emphasis and we have been doing a good job.”

The interception streak began with Moss’s pick at Purdue last Oct. 19, and there have been 15 more during those 11 games. No. 1 was by Moss and No. 16 was also by Moss, a 57-yard return with 10 minutes left in Iowa’s second consecutive blowout victory. It is the record sixth consecutive time the Hawkeyes have defeated Minnesota.

“A lot of highlights, Jack Koerner, Moss,” Iowa head coach Kirk Ferentz said. “A lot of good efforts out there. Most importantly, it was a good collective, team effort. I’m proud of our football team.” 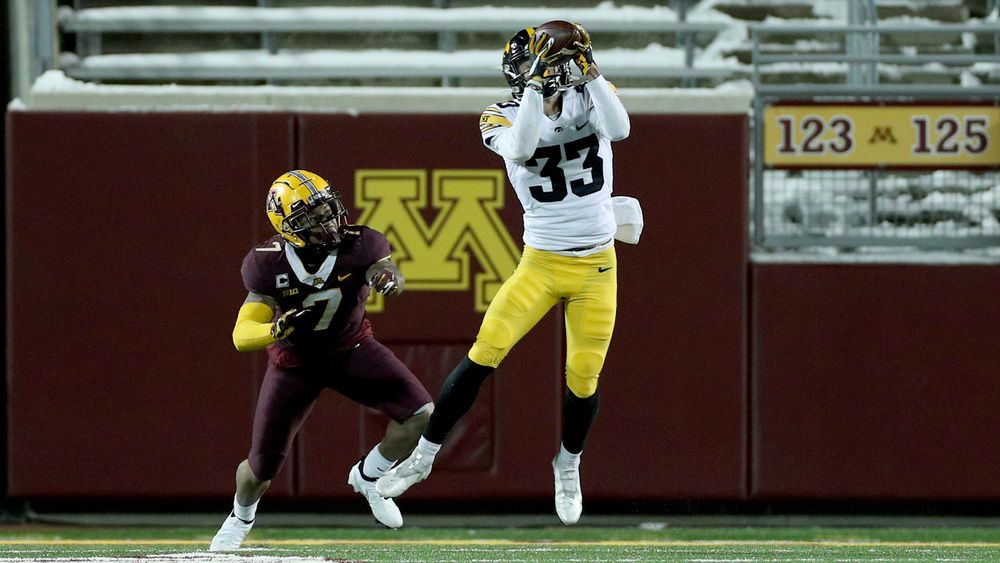 “The turnover:takeaway ratio is critical; it is one stat that means a lot over the years. We don’t necessarily have a turnover drill, but our guys are aware of it and usually turnovers come because guys are playing hard and hustling and being opportunist."

Ferentz noted that the two turnovers Friday came against a talented and veteran Minnesota offense that was kept out of the end zone for the first 59 minutes, 46 seconds. The Gophers entered the game averaging 36.3 points and quarterback Tanner Morgan had just two interceptions in the first three games of the season.

“The turnover:takeaway ratio is critical; it is one stat that means a lot over the years,” Ferentz said. “We don’t necessarily have a turnover drill, but our guys are aware of it and usually turnovers come because guys are playing hard and hustling and being opportunist.

“It was great to see both those guys do what they did — our defense has done a good job getting takeaways. If we can keep that ratio where it needs to be, that gives us a chance to be successful.”

The Hawkeye interception leaders during the last 11 games (eight wins) are Moss and Koerner with four apiece and Matt Hankins with three. Barrington Wade has two, and one each for Nick Niemann, Michael Ojemudia and Chauncey Golston. 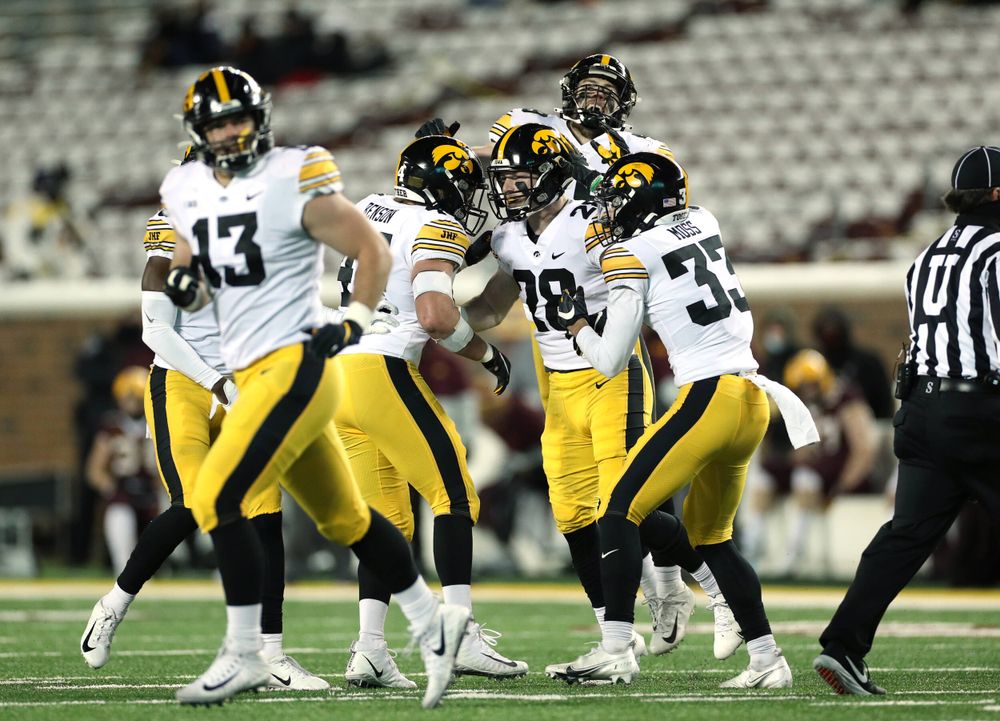 Koerner stated what Hawkeye fans have been thinking after the first two weeks of the season: a play here or a play there is the difference between 2-2 and 4-0. But the key now is improvement and it is happening with the Hawkeyes every week.

“This team and this defense can be as good as they want to be,” Koerner said. “Internally we know what we’re capable of. We have good players and it will take a little meshing and we will get better every time. That is starting to come to fruition.”

Next is a road trip to Penn State, the last team to keep Iowa interception-less on Oct. 12, 2019. Entering Saturday’s game against Nebraska, the Nittany Lions have thrown nine touchdowns, the second-highest total in the Big Ten. But they also share the league lead with five interceptions thrown.

It sets the stage as an opportunity for Iowa’s defense to crank up the interception amplifier one louder to 12.