IOWA CITY, Iowa — It is bizarre talking Thanksgiving and Heroes Game after the fifth week of a Big Ten football season, but 2020 has been, well, bizarre.

Fueled by a three-game winning streak, the University of Iowa (3-2) is set to host Nebraska on Friday with a noon (CT) kickoff. Iowa has won the last five and six of the last seven in the series.

“Somebody mentioned Thanksgiving last week and at that point we had played four games,” Iowa head coach Kirk Ferentz said. “It’s kind of weird to be talking about Thanksgiving after (five) games, but what has been normal this year? Hopefully it’ll be a great Thanksgiving and more importantly, a great game on Friday.”

Iowa jumped to a 31-7 lead at Penn State n Nov. 21 and scored 10 straight points in the four quarter to defeat the Nittany Lions, 41-21, for the first time since 2010. The Hawkeyes scored on five of their first eight drives and four of those ended with a touchdown.

“(Starting fast) is something you want to do every game, especially going on the road,” Ferentz said. “Our guys showed up at 3:40 ready to go and they had a good energy to them. We took the ball down and got a field goal right off the bat and then Penn State scored, but we came right back and answered, so I thought the guys got off to a good, fast start.”

When Iowa faced adversity — a.k.a. the third quarter — when the Hawkeyes punted, scored, missed a field goal and punted again, they weathered the storm and finished strong. 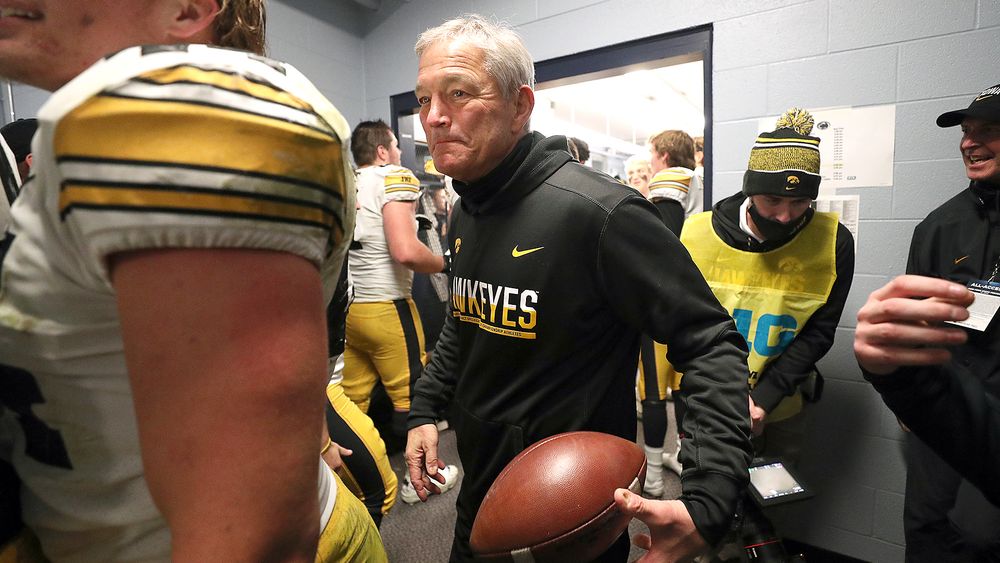 “It’s kind of weird to be talking about Thanksgiving after (five) games, but what has been normal this year?"

“It was a bumpy third quarter, but good for our team in the fact that we’ve been in those situations with good teams where it has gone South right there,” Ferentz said. “The guys fought back and at the end of the game we were all feeling pretty good.”

The Hawkeyes scored 24 points off turnovers and had two (yes, two) interceptions from a defensive lineman. The clincher was a Pick Six from 71 yards by 6-foot-3, 305-pound Daviyon Nixon. Iowa also recovered two Penn State fumbles.

“Our guys are doing a good job on takeaways and I don’t know if there’s a special reason for it other than they are playing hard and they’re doing a good job of film study and being where they should be and then being sound fundamentally,” Ferentz said. “We’ve been responding after those takeaways all season, converting those into points.”

In the past three games, Iowa has outscored opponents by a combined 90 points. In the process, the Hawkeyes have run for 226, 235 and 175 yards. Mekhi Sargent gained 101 yards and scored two touchdowns at Penn State.

“I have to give Mekhi a tip of the hat,” Ferentz said. “The line was doing a good job, the receivers, tight ends, fullbacks blocking, but Mekhi was running hard…Mekhi was a difference-maker.”