After being away from the team for 10 days following the unexpected death of his father, Nunge tied a career high in his season debut to lead the third-ranked University of Iowa men’s basketball team to a 99-58 victory over Western Illinois on Mediacom Court inside Carver-Hawkeye Arena.

“I talked to my dad on Friday night and got the call nobody wants to get the next morning,” said Nunge, a sophomore from New Castle, Indiana. “I knew I had to go home and be with my family. It has been difficult, but my mom is strong, my family is strong, my siblings are strong. We’re going to get through this.

“Being able to play this game gave us a distraction for a night. That is good for my family.”

Nunge was the first Hawkeye off the bench and he scored seven points in the first half before netting a team-best 11 points in the second half to tie his career high. He finished 8-of-11 from the floor (2-of-4 from 3-point range) and five rebounds in 19 minutes.

“It was incredible to see and I knew it was going to happen,” said Iowa head coach Fran McCaffery. “He hadn’t practiced in well over a week, he’s been grieving with his family, and he had one of the best practices I had ever seen.

“He knows how to play, gets open, stretches the floor and makes 3s. He affects the game in so many ways. To see him get 18 and be on the floor in a critical juncture of the game, it was an amazing feeling as a coach. I am thrilled for Jack and for his family.”

While Nunge provided a lift off the bench, senior Luka Garza wowed for a third straight game.

The All-America center scored 30 points in the first half for a second straight game before finishing with 35 points on 13-of-21 shooting and 10 rebounds in 25 minutes. It is his second double-double in three games.

The Hawkeyes limited Western Illinois to 28.2 percent shooting in the first half as the Leathernecks made just three of their first 21 field goal attempts. Iowa led 48-26 at the break with Garza out-scoring Western Illinois, 30-26, by himself. 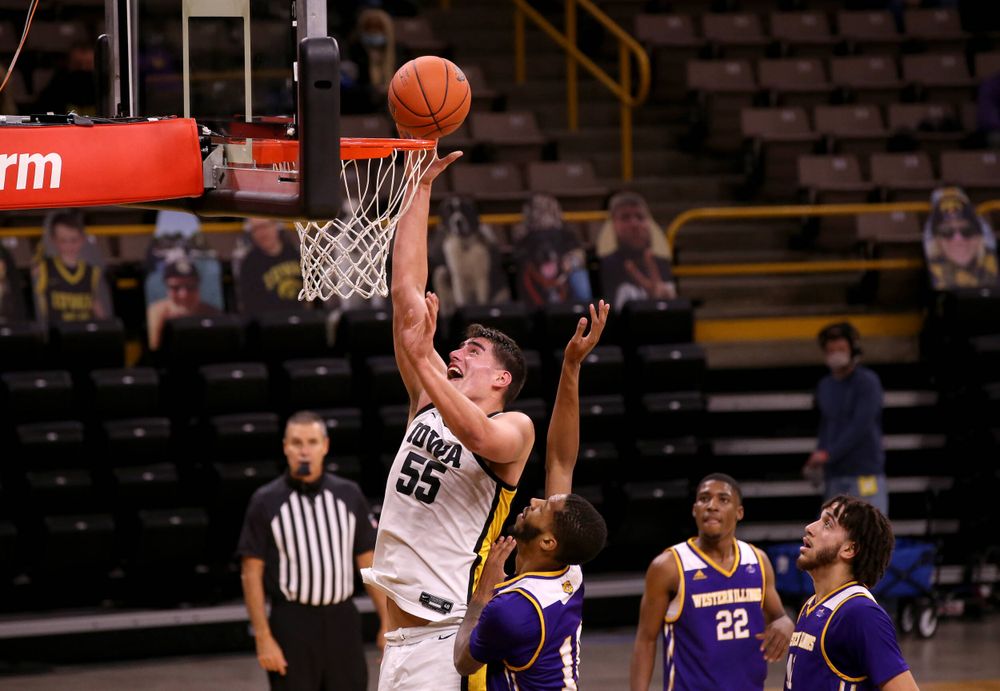 “That group with Keegan, Patrick (McCaffery) Joe T. (Toussaint), Jack, and CJ (Fredrick) – those guys were special in that stretch,” said McCaffery. “The rest of the group got us up by a bunch and played well but seeing that group changed the complexion when they made a run at us. That was fun to see.”

Junior Joe Wieskamp and Patrick McCaffery joined Garza and Nunge in double figures for the game with 11 points and 10 points, respectively. Iowa shot 47.1 percent from the field and made 8-of-23 3-point field goals, and the Hawkeyes were +13 on the glass (57-44).

THE NEXT ONE IS A FUN ONE

After reeling off three straight wins to open the season, the Hawkeyes will face their first “real” test Tuesday when 14th-ranked North Carolina comes to Mediacom Court for the ACC/Big Ten Challenge.

“This is a big-time game for us and our program,” said Garza. “We watch the on television and see what they do and we’ll take a deeper dive after this game. We’re excited and are going to get locked in on them so we can put our best foot forward.”

UP NEXT
Iowa returns to action Tuesday against No. 14 North Carolina (3-1) in the ACC/Big Ten Challenge. Tipoff is set for 6:30 p.m. (CT) on Mediacom Court at Carver-Hawkeye Arena.