Make It 3 Straight Over Iowa State

Senior Luka Garza scored 34 points, including 21 straight in the second half, to lead the third-ranked University of Iowa men’s basketball team to a 105-77 victory over Iowa State on Friday night on Mediacom Court inside Carver-Hawkeye Arena.

The Hawkeyes are 5-0 heading into their nonconference finale Sunday against Northern Illinois.

Garza made 13-of-14 field goals in the game, including a career-high six 3-pointers (in seven attempts) en route to his third 30-point game this season. It was his eighth 30-point game of his career.

“It was great for our team to move the ball today,” said Garza. “Several guys got hot at different points and we’re just the type of team when we find the hot hand, we keep going to it and a lot of guys were great tonight.”

No one more than Garza.

Iowa was leading 68-55 when the Greatest Garza Show on Earth began. He hit four consecutive 3-pointers in a span of 2:13 to push the Hawkeye lead to 80-58. After back-to-back put back layups pushed the lead to 64-61, Garza hit his sixth 3-pointer at 7:24 mark before a layup at the 6:49 mark capped his run and ended his night.

“I felt like nothing I was going to shoot would miss,” said Garza, who scored 25 of his game-high 34 points in the second half. “I felt like everything I was putting up was a good shot.”

The Hawkeyes stretched their lead to a game high 30 points in the final minute courtesy of a deep 3-pointer from walk-on and Iowa native Austin Ash.

Redshirt sophomore Jack Nunge posted a double-double, finishing with 17 points and 10 rebounds. Nunge scored 15 points on 6-of-7 shooting and grabbed eight rebounds in the first half when Garza played just seven minutes with after picking up two fouls.

Junior Joe Wieskamp was the third Hawkeye in double figures with 16 points on 6-of-9 shooting, while sophomore Joe Toussaint had seven assists in 13 minutes.

Javan Johnson led a trio of Cyclones in double figures with 20 points on 8-of-16 shooting. 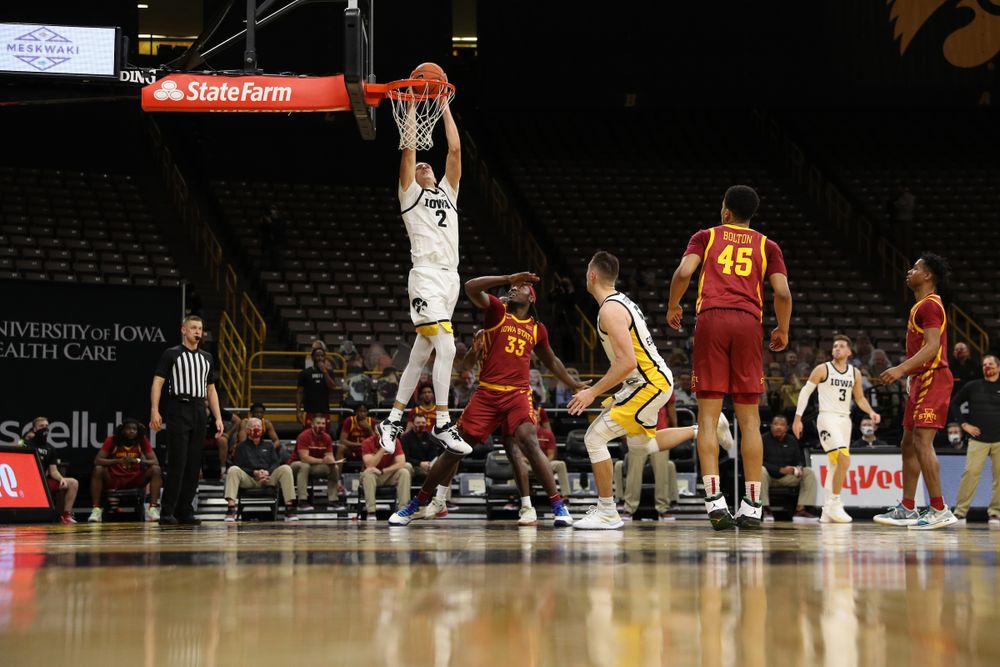 QUOTING HEAD COACH FRAN MCCAFFERY
“Luka has really become well-equipped to handle whatever they throw at him. He’s seen it. He never panics. He gets rid of it. He shoots it outside. He can go one dribble kick. He can make a dribble move to the basket. Go off either shoulder in the post.

“But sometimes the most impressive thing, I mean, the offensive rebound put-backs, when you have a good possession, it doesn’t go in, they think they got a stop, he gets it, puts it back in. I mean, those things really wear on the other team, and that’s what he does.”

ONE. TWO. THREE.
Iowa has won three straight over Iowa State for the first time since 1988-90.

“That’s huge. That’s something CJ (Fredrick) and I were talking about after the game,” said Wieskamp. ”Coming in in the same class, we’re 3-0. That’s special and we want to continue to move that forward.”

NUNGE PICKS UP THE SLACK
Nunge was one of the most important Hawkeyes on the court in the first half, spelling Garza while he was in foul trouble. The Indiana native nearly posted a first-half double-double, finishing with 15 points and eight rebounds in 12 minutes.

“I knew I couldn’t get into foul trouble and I knew I needed to step up for our team,” said Nunge. “That’s been our mentality throughout the offseason, if someone misses a practice here or there, it’s the next man up. That’s something our team has taken ahold of this year.”

“Jack was huge tonight,” said Garza. “For him to step up in my role and be very good and to have 15 at the half, he was killing them. It gives me great confidence that if I make a mistake (with foul trouble), we’re not doomed. We have a team with a lot of guys that will step up when I make a mistake.”

UP NEXT
Iowa concludes its six-game homestand on Sunday against Northern Illinois (0-4). Tipoff is set for 1:01 p.m. (CT) on Mediacom Court at Carver-Hawkeye Arena.