No. 16 Iowa Takes Back Heartland Trophy

Bruiser the Bull, aka the Heartland Trophy, will stay in the Iowa City following the 16th-ranked University of Iowa football team’s 28-7 victory over No. 25 Wisconsin on a cold, snowy Saturday inside Kinnick Stadium.

“To send the seniors out like that at Kinnick… that was amazing,” said junior Mark Kallenberger.

The win gives the Hawkeyes their sixth victory of the season and gives the team possession of all four traveling trophies for the first time since the 2015 season.

Iowa’s defense was punishing in the victory, surrendering 225 yards (just 56 yards on the ground) and forcing two turnovers. The Badgers punted nine times in the game and the only Wisconsin scoring drive came following a Hawkeye special teams’ miscue that give the Badgers starting field position at the Iowa 25.

“We put our foot down and said we were not going to let them run the ball,” said senior Nick Niemann.  “Everyone did their part tonight.”

Senior Chauncey Golston had a team-high nine tackles, including four solo and a sack, on Senior Day, while seniors Nick Niemann and Matt Hankins had eight and seven stops, respectively. Redshirt freshman Jack Campbell had a fourth-quarter interception in the end zone, and senior Nick Niemann had a fumble recovery in the first quarter that set up Iowa’s first score.

Offensively, Iowa came on in the second half after gaining just 112 yards over the first 30 minutes. The Hawkeyes finished with 338 yards for the game, which included 127 yards on the ground.

“It was to the plan to keep attacking, it would come,” said Smith-Marsette. “We knew if we stayed patient it would come and keep going.  We knew we had to stay on the attack in the second half.”

Sophomore Spencer Petras completed 14-of-25 passes for 211 yards and two touchdowns – both to Smith-Marsette. Smith-Marsette had a team-high seven catches for 140 yards, including 19 and 53-yard touchdown receptions in the second half.

Sophomore Tyler Goodson and senior Mekhi Sargent combined for 157 yards on the ground. Goodson broke off an exclamation-point 80-yard touchdown run in the fourth quarter and he finished with 106 yards on 11 attempts for a 9.6-yard average. Sargent had 13 carries for 56 yards.

Wisconsin quarterback Graham Mertz was 20-of-38 for 169 yards, while Jack Dunn had five receptions for a team-high 55 yards. Nakia Watson had 13 attempts for just 29 yards and a touchdown to pace the Badger rushing attack. 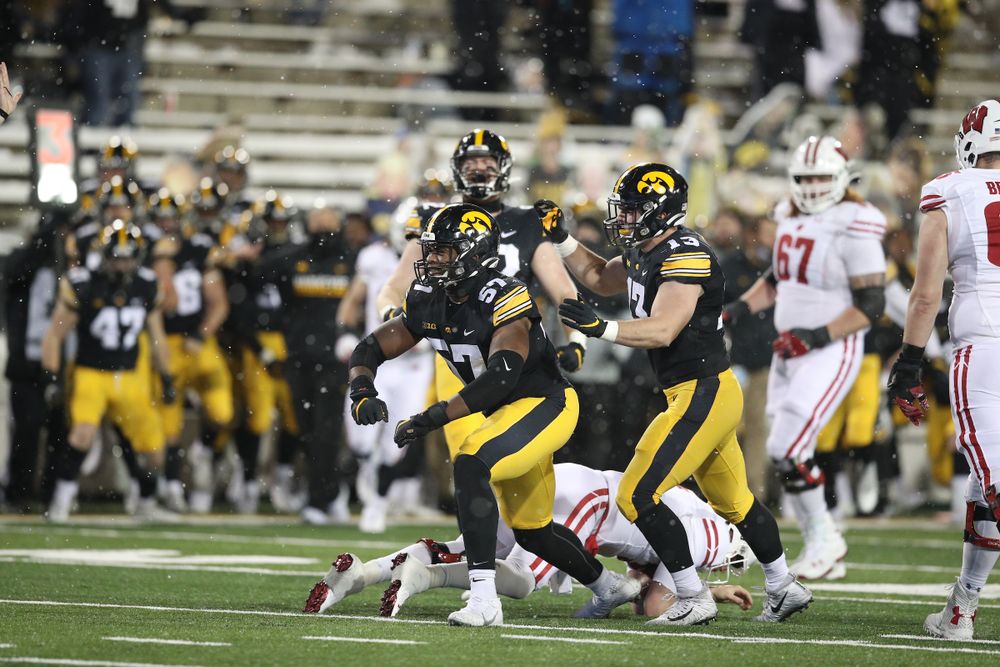 Quoting Head Coach Kirk Ferentz
“First of all, it was a tremendous win for our entire football team. To get our sixth straight, fourth trophy game, although this year we’re just holding one of them. I am happy for everybody, especially our seniors. Those guys have done a great job. Now they can finish their careers here, not only seeing the bull, but us having it in possession. I am happy about that.

“I am happy for the seniors to have a great memory as they leave Kinnick. That’s a special thing for each and every one of them, something we’ve talked about. I know they’ll all look back on this game really fondly.

“Going into the game, we knew it was going to be a tough defensive battle. I think everybody understood that. You get in games like this, everything that you do is contested, every yard is a fight. That certainly was the case today.

“Also in games like this, it’s all about trying to capitalize if opportunities appear. Wisconsin did a good job of that, at least on one of them. We were able to do the same thing today. I am happy about that.

“Some guys that did a great job, Keith Duncan broke a record, which is great, for long field goals. I am happy for him and certainly both of our senior receivers gave us a spark. Ihmir and Brandon came up big for us. That’s what you have to do.

“I though standing on the sidelines, I have to pay compliments to Chauncey Golston, he did some good things. His pass-rush, the one tackle he had on a third-and-1 was exceptional. Not only did he tackle the guy, but pulled him backwards. The officials, there was no lack of clarity on that one. That was certainly good.

“Again, I think overall coming off an 0-2 start, I can’t say enough about the way our football team kept their focus where it should be. They worked hard, gave great effort, and showed a lot of grit over the last six weeks. I am pleased for them and am happy for each and every guy on our football team.

The last thing, I just want to thank the parents, our senior parents being here. Unfortunately, they couldn’t have a normal Senior Day, but hopefully this will work for them.
Also the people that got the field ready to go. It was dicey weather coming in, overnight and this morning and they got us in good shape. The field conditions were great. It gave us a chance to play a good game today.” 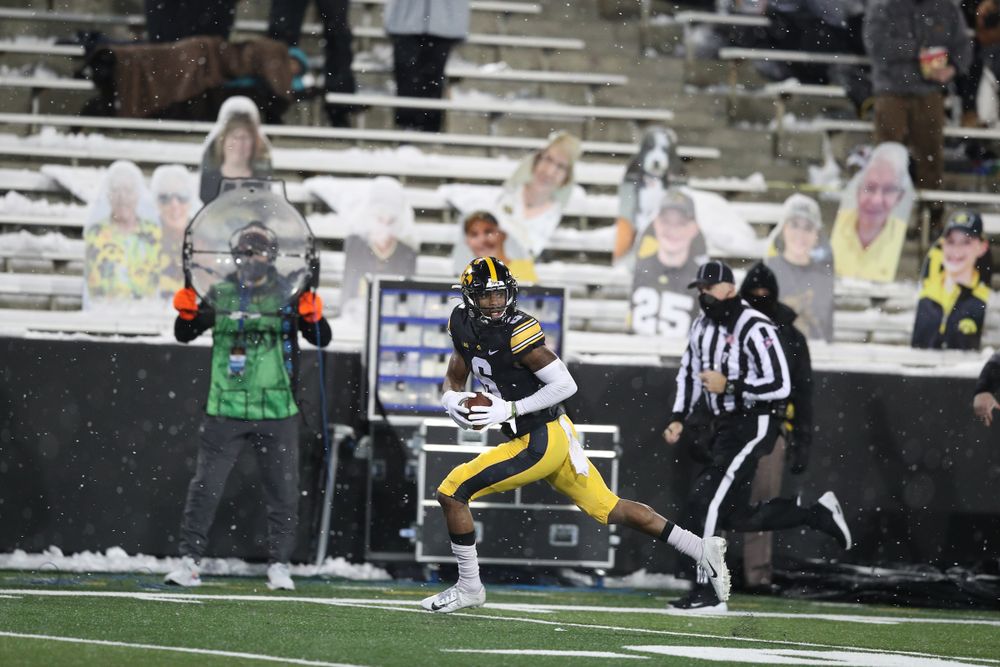 Up Next
The Hawkeyes will play Big Ten Champions week on Dec. 19. Game information has not yet been announced.