IOWA CITY, Iowa — For 1,081 days and 42 home games, the University of Iowa women’s basketball team won. Some of those victories were blowouts, some were nail biters, all — because of the final score — gave off a pleasant aroma even if it wasn’t always unblemished basketball.

“Coach J (associate head coach Jan Jensen) gave me a quote and it was like, ‘Winning is like a really good deodorant, it masks a lot of things,’” said junior center Monika Czinano. “That is true; when you are winning a bunch, you aren’t able to recognize areas where you can grow. As much as it sucks, losing on our home court is a jump start in the direction we need to go.”

Czinano fouled out with 2:39 left in regulation Wednesday with the Hawkeyes leading Ohio State, 78-76. The Buckeyes rallied from 14 points down in the third quarter to win, 84-82 in overtime. The loss was the first for Iowa on Mediacom Court since Jan. 28, 2018 — the second longest streak in the nation.

“We’re disappointed, but we’re a work in progress,” Iowa head coach Lisa Bluder said. “We’re a young team, we’re going to make mistakes because we haven’t been in those situations before.”

The Hawkeyes head into Monday’s home matinee against Purdue with a record of 8-3 overall, 4-3 in the Big Ten. How did Iowa’s youngsters handle their second consecutive setback? Like seasoned veterans. 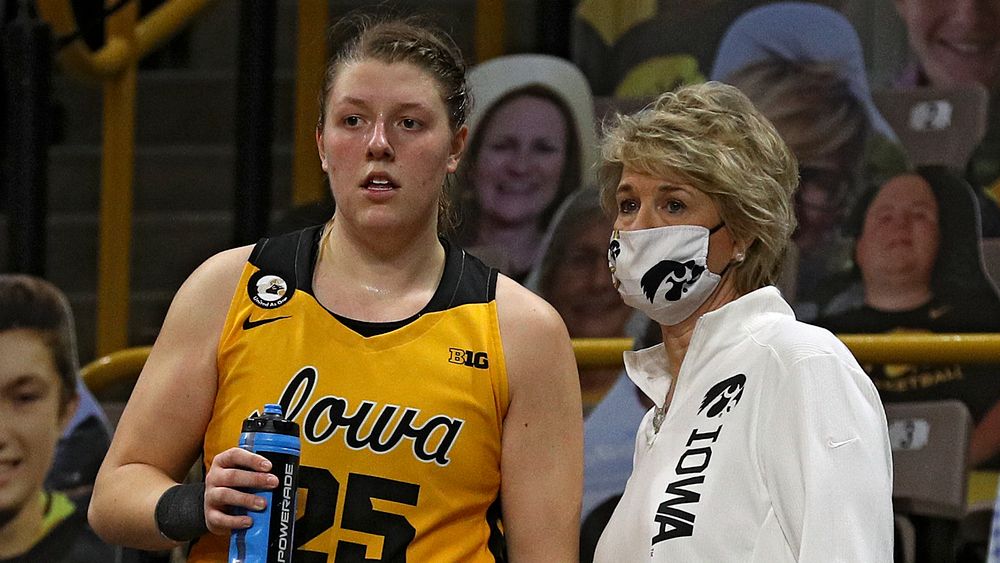 "When you are winning a bunch, you aren’t able to recognize areas where you can grow. As much as it sucks, losing on our home court is a jump start in the direction we need to go.”

“Our team did a good job of moving on (Friday),” Bluder said. “We had a day off (Thursday) and I always hate a day off after you lose because you sit and stew on it. I think that is awful. (Friday) we had a good practice, the energy was high, they came out optimistic.”

Before the Hawkeyes hit the practice floor, team captains Zion Sanders, Alexis Sevillian and Kate Martin scheduled a pre-practice pow-wow. They stressed that this isn’t crisis time, it’s growing time. Sure, it’s OK to be disappointed by a loss, but it can’t affect the rest of the season. In other words, let’s find ways to move forward…together.

“Practice (on Friday) was amazing,” said sophomore McKenna Warnock. “Everyone on the team came in and worked their butts off. There were no excuses; we just worked as hard as we possibly could. We knew there were many aspects we could get better at and (Friday) was more of a team cohesion day.”

Returning to practice was beneficial for Bluder as well. Saying she doesn’t enjoy winning as much as she hates losing, a day away from the gym Thursday was challenging. Her mood swayed 180 degrees Friday during and after practice. She saw positive energy, effort and focus.

“They weren’t hanging their heads and woe is me,” Bluder said. “They were ready to learn from it, move on and go to the next one. That’s all I can ask of them: come in every day and control your effort and attitude and be a good teammate. Those are the three things I ask of my team every day and they did it (Friday).”