Garza & the Reserves Down Michigan State

IOWA CITY, Iowa – It was Luka Garza and the Hawkeye reserves that led the eighth-ranked University of Iowa men’s basketball team to an 84-78 victory over Michigan State on Tuesday night on Mediacom Court inside Carver-Hawkeye Arena.

Garza was Garza, finishing with a game-high 27 points on 9-of-18 shooting and 12 rebounds for his eighth double-double of the season. The Hawkeye bench was the difference, as the six reserves combined for 39 points, 19 rebounds, and eight assists.

“The bench was huge, I am so proud of those guys,” said Garza. “Throughout the whole game, they were making plays, first half, second half, they gave us a lift and were giving us energy.”

The Spartans came out on a torrid pace, making their first six 3-pointers to build a 26-15 lead eight minutes in. With a lineup consisting of Patrick McCaffery, Toussaint, Perkins, Nunge, and Garza, the Hawkeyes had the lead trimmed to 28-23 at the 8:41 mark.

“We had that lineup on the floor that clicked,” said head coach Fran McCaffery. “It wasn’t like I came into the game and said I was going to go with this lineup. That lineup was on the floor and they played well together. That’s what you need, you have to be able to do that.”

Iowa pushed its lead to eight points early in the second half, but the Spartans battled back to tie the game at 57, 59, 61, and 63 with 10 minutes to play. The Hawkeye reserves took over.

Patrick McCaffery’s fast-break layup (on an assist from Toussaint) game Iowa a 65-63 lead, Toussaint followed with back-to-back jumpers, Murray made two free throws, and Perkins’ driving layup made the score 73-68.

The Hawkeyes pushed their lead to 79-70 with 3:37 left on a Garza layup, but the Spartans wouldn’t go away. Michigan State got to within a field goal at 80-78 and had a chance to tie or take the lead with 24 seconds to play, but Josh Langford’s pull-up jumper rattled off the rim.

Senior Jordan Bohannon then iced the win with four free throws in the final 15 seconds.

Aaron Henry paced the Spartans with 24 points and nine rebounds. 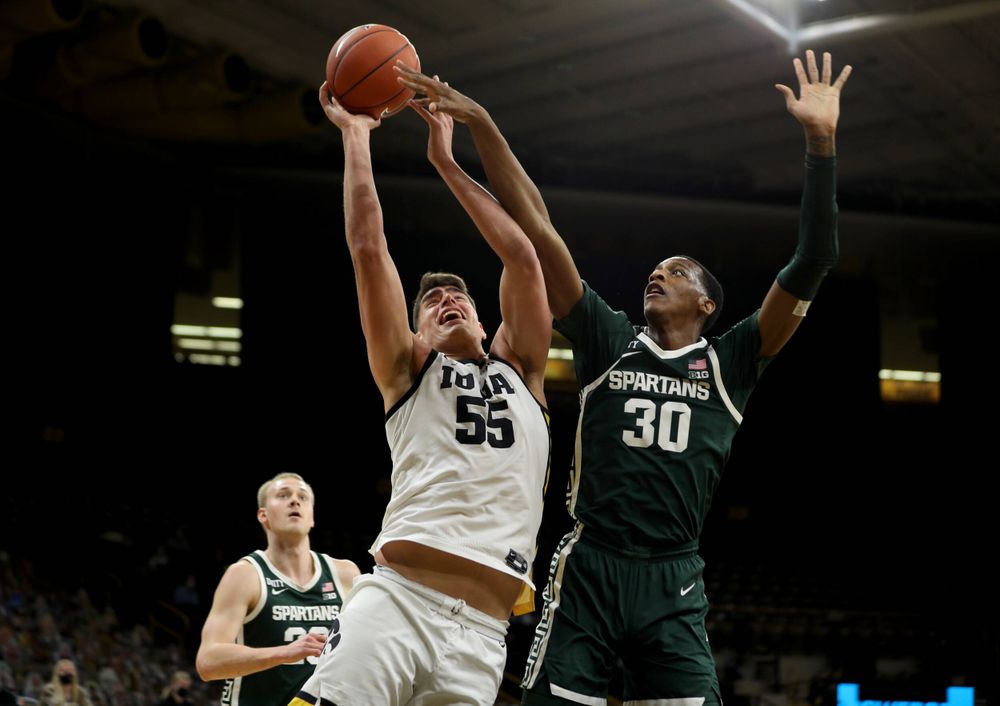 QUOTING HEAD COACH FRAN MCCAFFERY
“I don’t know how many times I have looked at a stat sheet and seen 39 bench points, that’s incredible. We missed some shots early with the first group and they came back and gave us quality minutes after that, but we have a team where we can go deep into our bench and get productivity. We got rebounds, points, and solid play. It was great to see Joe T. with six assists and one turn.”

“It feels better that it came in a win like this,” said Garza. “I am lucky to have been a part of this program. I am lucky coach Fran gave me an opportunity to come to the University of Iowa and he believed in me when some coaches didn’t.”

“To hear him mentioned in the same sentence as Roy Marble, I coached against Roy and watched him play,” said Fran McCaffery. “We became good friends after I got here and I had the opportunity to coach his son, one of my favorite players ever.

“I wish Roy was here to see it. He would have been a big Luka Garza fan and he would have gone out and given him a big hug when he broke the record. Two thousand points is amazing and it’s a testament to his character and consistency. When you think about who he’s doing it against, that makes it even more impressive.”

UP NEXT
Iowa returns to action Thursday, hosting No. 7 Ohio State in Iowa City. Tipoff is set for 6 p.m. (CT).