INDIANAPOLIS – Second-seeded Illinois scored 52 points in the paint to bounce the third-seeded University of Iowa men’s basketball team from the Big Ten Tournament in a semifinal matchup with an 82-71 victory Saturday afternoon at Lucas Oil Stadium.

The Illini led by as many as 14 early in the second half and the lead hovered around double digits for much of the half. Illinois led 74-61 with 5:19 to play before the Hawkeyes made a late push

A Jordan Bohannon 3-pointer cut the deficit to 10 and Connor McCaffery made two free throws to get the deficit to 74-66 with five minutes to play. Bohannon made a transition 3 at the 3:42 mark to 74-69 and Iowa had the ball trying to get closer.

Andre Curbelo poked the ball away from Bohannon on the next possession for a steal and that led to a Ayo Dosunmu dunk. Two Bohannon free throws got Iowa to within 76-71 with 2:45 to play, but Kofi Kockburn followed with back-to-back field goals – a layup and dunk – to seal the win.

“In a game like this, every possession is important,” said junior Connor McCaffery. “I feel like we couldn’t get a bounce and we couldn’t get a call, and at times, we buckled down and fought through it. There were a couple possessions where we let it get to us a little bit and that’s the difference in the game.

“It was a five-point game with three minutes to go. With everything that happened, we were right there.”

“We put ourselves in a better situation in the second half, we contained their guards better and defended the paint better, but we gave up a lot of paint points and they came up with stops on the defensive end when they needed to,” said Bohannon. “We got within five (late), but it was around a 7-8 point deficit the entire game. That started in the first half when we dug ourselves a hole.”

Senior Luka Garza paced Iowa with 21 points and 12 rebounds, but the center was limited to 8-of-21 shooting. Bohannon scored 20 points with five 3-pointers and six assists, and junior Joe Wieskamp scored 12 points and had seven rebounds.

Cockburn had a game-high 26 points on 11-of-17 shooting to go along with eight rebounds. Dosunmu had a line of 18 points, nine assists, and seven rebounds. 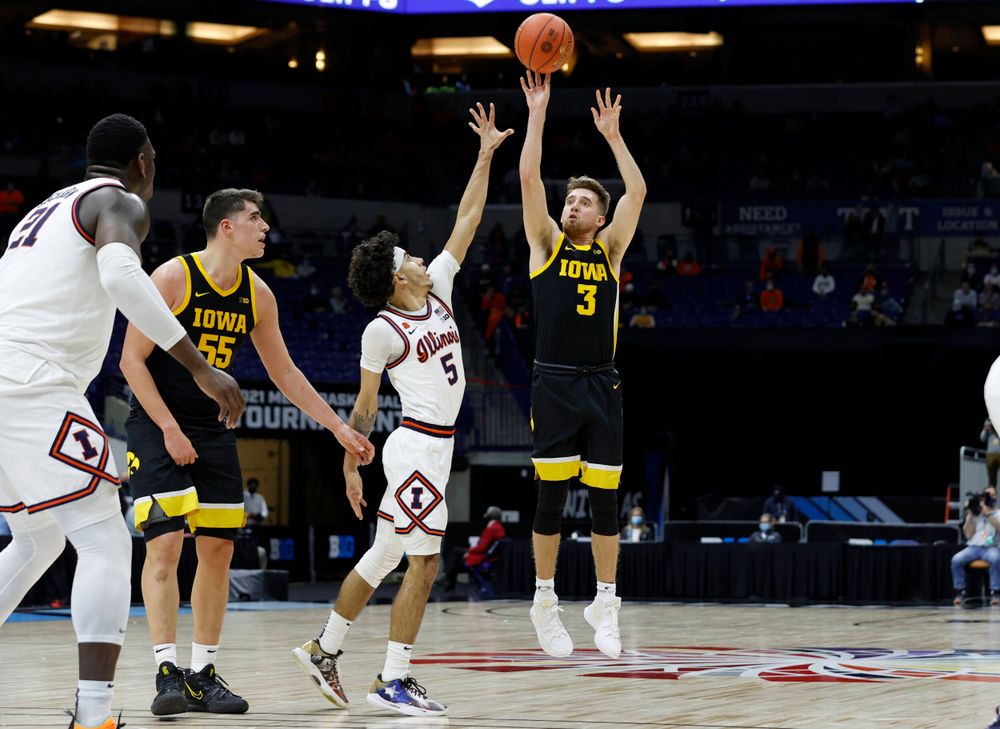 ON TO NCAAs
There is disappointment after the Hawkeyes dropped the game in their first Big Ten Tournament semifinal appearance since 2006, but this team has bigger aspirations.

“It sucks right now to lose and we’ll suffer tonight, but once we hear our name called tomorrow with a very high seed, we’ll be excited about our opportunity to do some special things in the tournament. If anything, it’s motivation that inspires us. We’re going to play a team like this, if not them, if we make it to where we want to make it. We have to be able to do better in that moment.”

QUOTING HEAD COACH FRAN MCCAFFERY
“We moved it well in the second half and got good shot opportunities, but this is a different type of game than when you play Wisconsin. Both teams are good, but they’re different. We adjusted much better in the second half.”

OF NOTE
• Garza totaled a team-best 21 points, 12 rebounds tonight. Garza topped 20 points an NCAA-best 20th time this season. He has posted his team-leading 13th double-double of the season and 33rd of his career.
• Since last season, Garza has topped 20 points 19 times in 24 games against AP Top 25 opponents.
• Bohannon finished with 20 points, bolstered by a game-best five 3-pointers, to go along with a team-best six assists. Bohannon has made five or more triples in a team-best seven games this season. The redshirt senior netted 20+ points for the fourth time this season and 21st time in his career.

UP NEXT
The NCAA Tournament Selection Show will air Sunday at 5 p.m. (CT) on CBS.