INDIANAPOLIS – Seventh-seeded Oregon used a 10-0 run to close out the first half and kept it going from there to hand the second-seeded University of Iowa men’s basketball team a 95-80 loss in the Second Round of the NCAA Tournament on Monday afternoon at Bankers Life Fieldhouse.

“I just feel bad that I wasn’t able to lead this team to where it needs to go, and we did a lot of really, really good things this year, and it just hurts that we weren’t able to do it when it mattered most, and that’s something that’s going to haunt me forever,” said senior Luka Garza.

The game was tied at 46 with 2:11 remaining in the opening half before the Ducks reeled off 10 straight points to take a 56-46 lead into the locker room. Oregon shot 59.5 percent in the first 20 minutes and made seven 3-pointers.

The Hawkeyes cut the lead to seven points on a Joe Wieskamp 3-pointer on their first possession of the second half, but before Iowa could blink, the deficit was 65-51 at the 17:47 mark. Spanning halves, the Ducks had a 21-5 run to blow things open.

Iowa got to within 10 points on a Wieskamp fast-break dunk, but Oregon answered with back-to-back 3-pointers from Eugene Omoruyi and LJ Figueroa and a Omoruyi slam. The Ducks led by as many as 21 in the game at 89-71.

Garza scored 22 of his game-high 36 points in the first half. He made 14-of-20 field goals, three 3-pointers, and 5-of-7 free throws and grabbed nine rebounds in his final collegiate game.

Aside from Garza and Wieskamp, Iowa’s other three starters went scoreless and went 0-for-8 from the field. CJ Frederick and Connor McCaffery didn’t play in the second half.

“CJ is in pain. He gutted through it for the better part of the games when he came back, and he was really good in some of them, but he hasn’t been himself half the season,” said head coach Fran McCaffery. “I’m proud of that kid for how he fought through and how he helped our team, particularly on the defensive end.

“Connor has torn labrums in both hips, so he will have surgery forthcoming, actually two surgeries. They do one, then they do the other one. He’s been struggling all year long with that but has consistently given us quality minutes and veteran leadership, and that was important for this team. So we’ll get those guys healthy and well in the summer.”

“Yeah, anybody can bring it, anybody can go, everybody can make 3s, and they spread you out,” said McCaffery of Oregon’s attack. “It’s a hard team to cover in so many different ways. They stretch your defense. We tried man, zone, we tried pressing them, had moderate success with all three, not enough in any one.” 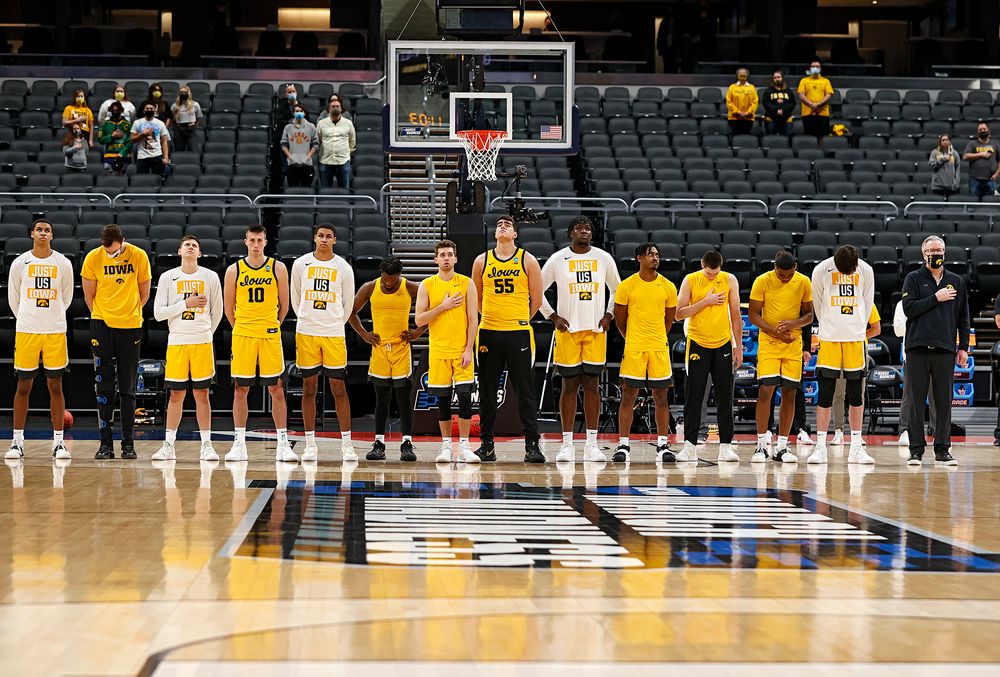 QUOTING HEAD COACH FRAN MCCAFFERY
“It was incredibly emotional, as it always is when your season comes to an end. This team and every other team this year has had to experience something totally and completely unique in the history of college basketball. I’ve said this before, but I’ll say it again, how proud I am of their commitment to one another and their sacrifice to get here.

“It has been an incredible journey with this group of young men. A lot of people telling each other how much they love them. I certainly did and how proud I am of them. But
also we had two seniors that literally rewrote the record book at the University of Iowa, which is quite a statement.”

OH WHAT A CAREER
Garza tied Bill Logan’s program record for points in an NCAA Tournament game, finishing with his 36 points. Logan accomplished the feat in 1956.

The Washington, D.C., native finishes his career with 2,306 points.

“There’s a lot of things that we did over my time here that I’m proud of as a team, and I’m excited for the future of this program,” said Garza. “Fran McCaffery, he has changed my life, and he has changed so many people’s lives, and he is the coach to do it. I just unfortunately couldn’t lead us out on the court.”

OF NOTE
• Iowa ends its season 22-9 overall, including a 14-6 conference record.
• Luka Garza led all scorers with 36 points. Garza netted double figures for the 100th time in his career and 20+ points an NCAA-best 22 times this season.
• Garza reached the 30-point plateau an NCAA-best eight times this season. Additionally, he has topped 30 points 13 career times, tying John Johnson for the most in program history.
• Luka Garza’s 36-point effort tied the school record for most points scored by a Hawkeye in an NCAA Tournament game (36, Bill Logan vs. Temple, 3/22/56).
• Garza was 14-of-20 from the floor today. His 14 field goals made equal his second highest in a single game in his career (17 at Michigan, Dec. 6, 2019).
• Joe Wieskamp, Luka Garza, and Jordan Bohannon became Iowa’s highest scoring trio on the same team in school history. The trio increased their career point total to 5,227 points, surpassing the trio of Ed Horton, B.J. Armstrong, and Roy Marble (5,193 points).
• The Hawkeyes fall to 6-2 all-time against Oregon, with both losses coming in the postseason (2012 NIT; 2021 NCAA).