WEST LAFAYETTE, Ind. — Redshirt junior Brett McCleary’s two-run, 10th-inning single propelled the University of Iowa baseball team to a 4-2 victory over Purdue in Friday’s series opener at Alexander Field. The win is the Hawkeyes’ fourth straight and moves the team to .500 on the season.

“It was a good Friday night win,” said head coach Rick Heller. “Purdue played hard and competed, but our defense and pitching were both sound and gave us a chance to hang around long enough to win.”

After leaving two runners on in the eighth and the bases loaded in the ninth, Iowa broke through in the 10th. The Hawkeyes loaded the baes on a Peyton Williams walk and moved to second on a sacrifice bunt against Purdue reliever Landon Weins.

The Boilermakers proceeded to load the bases via intentional walks to Tyler Snep and Zeb Adreon, bringing McCleary to the plate with one out. The Iowa City, Iowa, native hit a 1-1 pitch the other way, driving in a pair of runs with a single to right field to give Iowa a 4-2 lead.

Redshirt junior Dylan Nedved followed by getting his eighth, ninth and 10th outs of the game, retiring the Boilermakers in order in the bottom half to earn his second victory. Nedved allowed one hit over 3 1/3 innings and fanned a career-high five.

The right-hander is 2-0 with a 0.00 ERA with four saves and he hasn’t allowed a run in any of his seven appearances this season, spanning 13 2/3 innings.

Nedved’s night began when he entered with the bases loaded with two outs in the bottom of the seventh. He struck out Ben Nisle looking to keep the game tied at two.

The Hawkeyes jumped out to a 1-0 lead in their first at-bat on an RBI single from Ben Norman. Purdue grabbed the lead with single runs in the second and third against Iowa starter Trenton Wallace. Iowa then tied the game on a Purdue two-out error on a dropped fly ball in right field that allowed McCleary to score from first base.

Wallace was strong in the start, allowing two runs on six hits over 6 2/3 innings. He had eight strikeouts to two walks before departing at the 104-pitch mark. 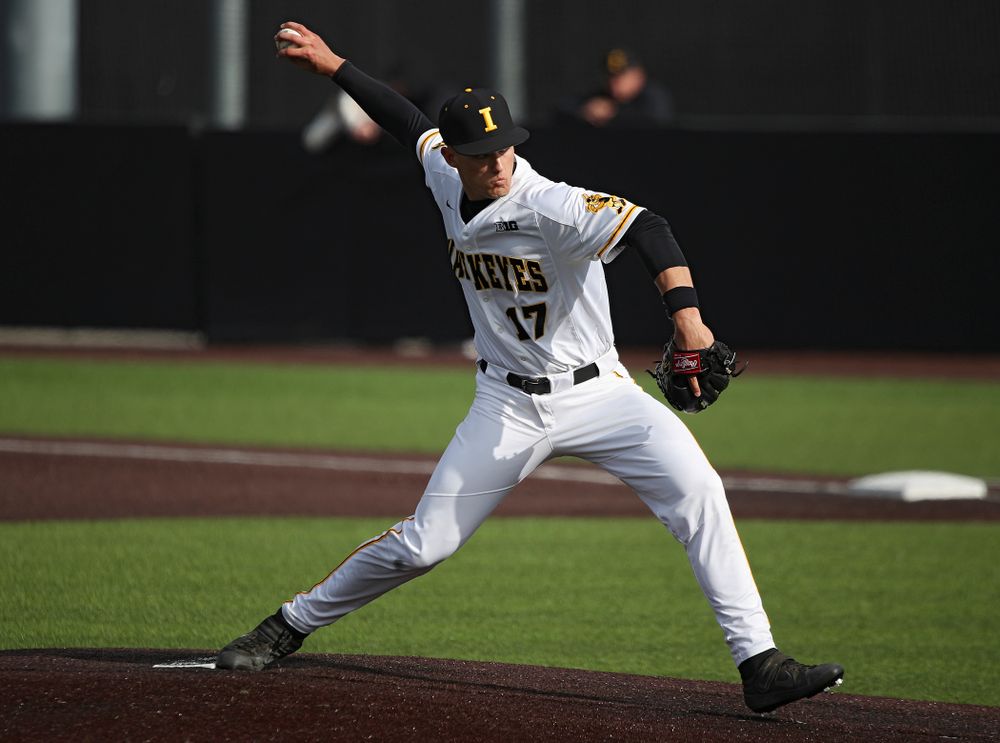 QUOTING HEAD COACH RICK HELLER
“The story tonight was how well we pitched. Trenton gave us a great start and went deep into the game, which we needed him to do, and Dylan was outstanding in relief.

“We were given a lot of freebies and didn’t do a lot offensively against their starter Calvin Schapira; he pitched great. When we got to the bullpen, we had plenty of opportunities to score and we had some bad at-bats with runners at second and third and less than two outs and didn’t get the run in.

“It didn’t look like we were going to be able to get it done offensively. When it went into extra innings, McCleary came up in a similar situation and he did a nice job of driving the ball the other way and getting the big knock and Dylan went out for the fourth inning and shut them down.”

OF NOTE…
– Iowa is 8-8 overall, sitting at .500 for the first time since the second game of the season.
– Wallace has eight or more strikeouts in four of his five starts this season.
– Nedved pitched a career-high 3 1/3 innings and had a career-best five strikeouts.

UP NEXT
Game two of the weekend series is set to begin at 1 p.m. (CT) Saturday.