IOWA CITY, Iowa — University of Iowa redshirt senior Ben Norman is staying true to his approach and playing with confidence during the 2021 season.

Take away Norman’s opening weekend — when he went 0-for-14 in the four-game series against Michigan — and his batting averages climbs to .385, which would be top-six in the Big Ten Conference.

“That first weekend I went hitless, but I had four balls that were line outs,” said Norman. “I could have easily had two or three hits, but I just stayed with my approach. You have to realize you can’t press when you’re playing baseball because water finds its level.

“If you have consistent at-bats and stay with your approach and staying with that confidence, you’ll continue on a good path.” 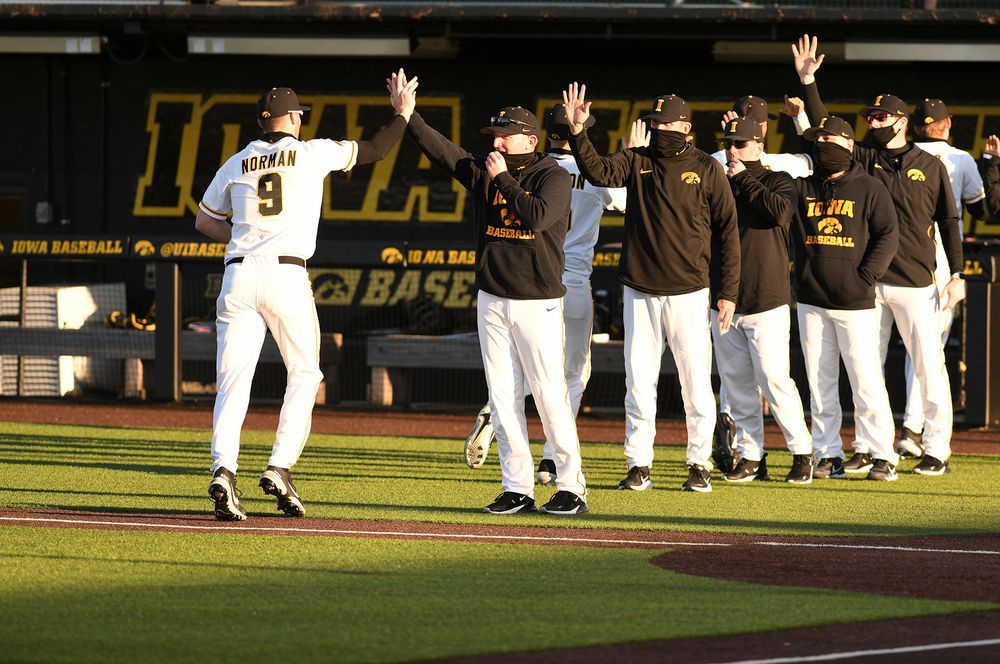 Norman quickly veered back on the “good path” in Week 2 and has been on a tear since.

During a four-game weekend in Minneapolis in Week 2, Norman hit .545 with six hits in 11 at-bats in games against Nebraska and Ohio State before following it up with a .429 (6-of-14) weekend with two home runs and seven RBIs in the three-game series against Nebraska in Week 3.

Norman hit two more home runs during the Hawkeyes’ 3-1 weekend in Columbus and he batted .364 (4-for-11) with six RBIs in helping Iowa win two of three games last weekend at Purdue. Norman hit his team-leading sixth home run on April 3.

“I have always had the mindset to stick to my approach and staying confident, but this year, I am sticking to it more and am being truer to it,” he said. “You have to have confidence in this game. Even when things aren’t going well, you have to know you’re a good hitter.”

Norman’s power numbers have exploded in 2021. His six home runs have tied his career high that he set as a junior in 2019 and they are tied for sixth in the Big Ten. Leading into this season, Norman had seven career home runs in 176 career games.

“It is experience and getting more at-bats,” said Norman. “I played a whole summer and had 3 ½-4 years of experience here before this. As you get more reps, you feel more comfortable in the box. When you have the ability, you can swing and attack a pitch more often.”

Norman said when he arrived on campus during Iowa’s 2017 NCAA Regional season, he was a “skinny teenager.” Now, 30 pounds later, he’s a seasoned veteran.

“I haven’t changed any of my mechanics,” said Norman. “I have gained power and strength over time. It’s adding up and (my production) is the result of getting more reps and experience.”

The Hawkeyes have won five of their last six games to climb to .500 in the Big Ten standings. Iowa will host Minnesota for a three-game series at Duane Banks Field from April 9-11. Fans can purchase tickets online at hawkeyesports.com (tickets must be pre-purchased as capacity is limited).