ON THE MAT
The Hawkeyes finished the 2020-21 season as Big Ten and NCAA champions. The conference title is the 37th in program history and the national title is the 24th in program history. Iowa crowned one NCAA individual champion, seven All-Americans, four Big Ten individual champions and 13 academic All-Big Ten honorees. The Hawkeyes were 5-0 overall and 5-0 in the Big Ten, sharing the regular season conference title with Penn State.

HAWKEYES WIN NCAA TOURNAMENT TITLE
The top-ranked University of Iowa wrestling team won the 2021 NCAA Championships on March 20 at the Enterprise Center in St. Louis. Iowa scored 129 points, 15.5 clear of second-place Penn State. The team title is the 24th in program history and the first since 2010. The Hawkeyes qualified 10 wrestlers for the NCAA Championships. Those wrestlers combined for a 38-13 overall record with 21 bonus-point wins, good for 27 bonus points. Iowa crowned seven All-Americans, more than any other team. Senior Spencer Lee won the 125-pound championships for the third time in his career. Seniors Jaydin Eierman (141) and Michael Kemerer (174) reached the finals for the first time in their careers, placing runner-up at 141 and 174. Austin DeSanto (133), Kaleb Young (157) and Jacob Warner (197) earned All-America honors for the third time in their careers. Tony Cassioppi earned his second career All-America honor at 285. The Hawkeyes have won a team trophy in 12 of the last 13 national tournaments.

SPENCER LEE WINS 2021 NCAA CHAMPIONSHIP
Senior Spencer Lee won the 125-pound NCAA Championship, becoming the seventh three-time national champion in program history and putting an exclamation point on the Hawkeyes’ 2021 NCAA team title.
Lee defeated Arizona State’s Brandon Courtney, 7-0. He scored four points in the second period from an escape, caution point and takedown, and added another takedown in the third to go along with one minute, 44 seconds of riding time. He was 5-0 in the tournament, outscoring his opponents, 59-8. His seven-point margin of victory was the largest of any of the 10 championships matches.
Lee is the seventh three-time NCAA champion in program history, joining the ranks of Ed Banach (1981, 81, 83), Barry Davis (1982, 83, 85), Jim Zalesky (1982-84), Tom Brands (1990-92), Lincoln McIlravy (1993, 94, 97) and Joe Williams (1996-98).

SPENCER LEE WINS HODGE TROPHY
University of Iowa national champion Spencer Lee was awarded the WIN Magazine/Culture House Dan Hodge Trophy. The award is presented annually to the nation’s most dominant college wrestler.
For the just the second time in its 27-year history, the Hodge committee determined two wrestlers worthy of recognition. Minnesota heavyweight Gable Steveson is also being recognized as a 2021 Hodge Trophy winner. The only other time two trophies were awarded in the same season was 2001, when Cael Sanderson and Nick Ackerman were both recognized.
Lee won the 125-pound NCAA Championship on March 20. He outscored his five opponents at the national tournament, 59-8, capturing his third career NCAA title and leading Iowa to the team title for the first time since 2010.

Lee was 12-0 in 2021, scoring bonus points in 11 matches and recording five first-period falls. He outscored his 12 opponents, 141-15, and his 91.6 bonus-point percentage led the country.
Not one of Lee’s first eight matches went the seven-minute distance. He had five first-period falls and recorded three technical falls, including a 21-3 win by technical superiority in the finals of the Big Ten Championships. He did not allow a point in the NCAA finals, winning 7-0, the largest margin of victory of any of the 10 NCAA finals matches.
Lee finished the season riding a 35-match winning streak, outscoring his opponents 432-42 during the stretch.
Lee is one of five multi-winners in the history of the award, and one of three Hawkeyes to win the award since its inception in 1995. Mark Ironside was honored in 1998 and Brent Metcalf earned the award in 2008.

SPENCER LEE NAMED BIG TEN WRESTLER OF THE YEAR
Junior Spencer Lee was named 2021 Big Ten Conference Wrestler of the Year. He also won the award in 2020. He is the third Hawkeye in program history to win the award more than once (Royce Alger, 1987-88; Mark Ironside, 1996-98). Lee finished the 2021 regular season 4-0 overall and won his second straight Big Ten conference title at 125 pounds. He outscored his four regular season opponents, 38-0, recording for first-period falls. Lee was 3-0 at the conference tournament winning twice by technical fall and once by fall, outscoring his three opponents, 44-7. The Big Ten Conference title is the second of his career. He is the 57th multi-Big Ten champion in program history. 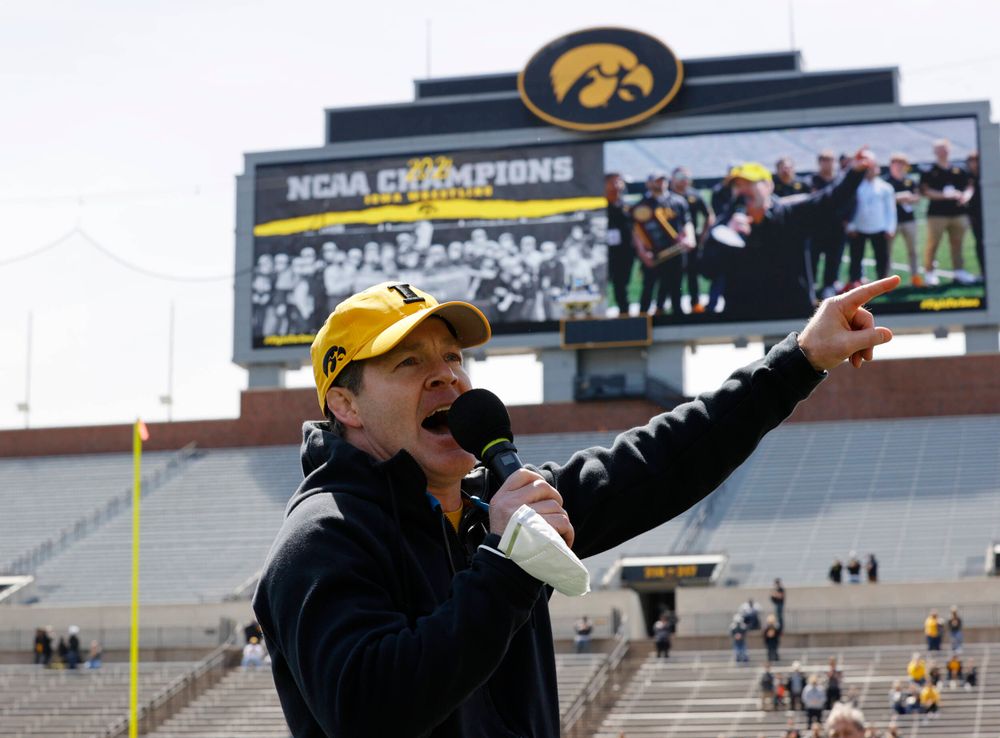 TOM BRANDS NAMED NWCA COACH OF THE YEAR
The National Wrestling Coaches Association announced March 17 that for the second straight year University of Iowa head wrestling coach Tom Brands has been named NWCA National Coach of the Year.
The NWCA coaching honor is the third of Brands’ career. He was recognized in 2020 and 2008. The 2008 team won the NCAA Championship and the 2020 team was the heavy favorite to win the national title prior to the tournament’s cancellation.

The 2021 Hawkeyes were ranked atop the national polls since the beginning of the season and won the 2021 Big Ten and 2021 NCAA Championships. Iowa crowned four Big Ten champions, one NCAA Champion and had a tournament-best seven All-Americans at the NCAA Championships. The Hawkeyes were 5-0 during the regular season.
The NWCA award is presented to the coach that has demonstrated outstanding effort throughout the season in developing and elevating their program on campus and in the community.
Brands was also named Intermat Coach of the Year for the second straight year.

BRANDS NAMED BIG TEN COACH OF THE YEAR
Following Iowa’s 2021 conference title, Tom Brands was named Big Ten Conference Coach of the Year for the fifth time in his career, more than any other coach in school history. He was previously recognized in 2008, 2009, 2010 and 2020 following conference titles. Iowa has six Big Ten championships under Brands (2008, 2009, 2010, 2015, 2020, 2021).
The Hawkeyes scored 159.5 points, its highest since 1995 (185) and won the team race by 35.5 points, the largest margin of victory by a conference champion since Iowa won by 37 points in 2010. Iowa crowned four individual champions (Spencer Lee, Jaydin Eierman, Alex Marinelli, Michael Kemerer) en route to its sixth conference title under Brands. It was the first time since 2001 Iowa crowned four individual champions at the Big Ten Championships (Eric Juergens, Doug Schwab, Jody Strittmatter, T.J. Williams).

HAWKEYES IN THE FINALS
Spencer Lee, Jaydin Eierman and Michael Kemerer advanced to the finals of the 2021 NCAA Championships to extend Iowa’s streak of NCAA finals appearances to 31 consecutive tournaments. Lee won the title at 125 pounds. Eierman (141) and Kemerer (174) each placed runner-up. Iowa has had at least one wrestler in the NCAA finals every year since 1990, and in 45 of the last 46 tournaments dating back to 1975.

ALL-AMERICAN STREAK
Seven Hawkeye Wrestlers earned All-America honors at the 2021 NCAA Championships, more than any other school. The Hawkeyes have crowned at least one All-American in 50 consecutive tournaments, a stretch dating back to 1972. Iowa has totaled 312 All-America honors during that stretch. Iowa’s 2021 All-Americans included Spencer Lee (125), Austin DeSanto (133), Jaydin Eierman (141), Kaleb Young (157), Michael Kemerer (174), Jacob Warner (197) and Tony Cassioppi (285). Iowa has had at least five All-Americans in eight straight seasons and 13 times in head coach Tom Brands’ 15 seasons. The seven All-Americans represent Iowa’s highest total since 2010, and five Hawkeyes place third or better for the first time since 2010.

CHASING THE HAWKEYES
Gary Kurdelmeier led Iowa to its first NCAA Championship in 1975, and in the 47 years since, the Hawkeyes have accumulated 24 team titles, more than any other school — Penn State (9), Oklahoma State (7), Minnesota (3), Iowa State (2), Ohio State (1) and Arizona State (1). 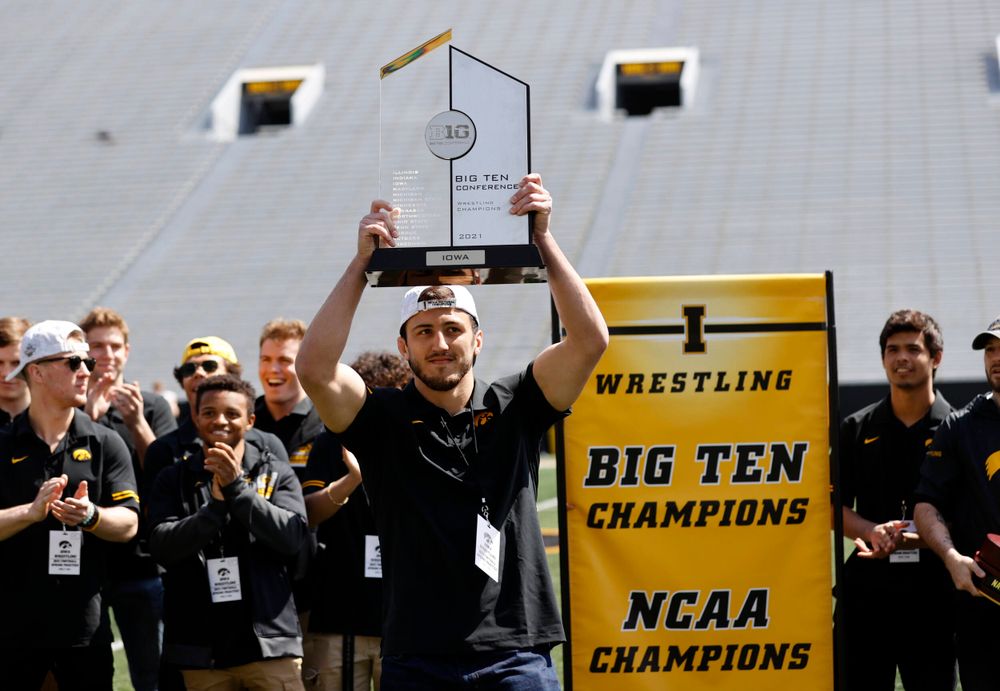 HAWKEYES WIN BIG TEN TOURNAMENT TITLE
The top-ranked University of Iowa wrestling team won the 2021 Big Ten Championship on March 7 in in University Park, Pennsylvania, scoring 159.5 team points and crowning four individual champions. The Hawkeyes’ 159.5 points were their most since 1995 (185). Iowa won the team race by 35.5 points, the largest margin of victory by a conference champion since Iowa won by 37 points in 2010. Iowa’s team title was the 37th in program history, more than any other school in the Big Ten.

ACADEMIC ALL-BIG TEN
Thirteen Hawkeyes were among the 73 University of Iowa student-athletes named to the 2020-21 Big Ten Winter Academic All-Conference Team. To be eligible for Academic All-Big Ten selection, students must be on a varsity team, as verified by being on the official squad list as of March 1 for winter sports, who have been enrolled fulltime at the institution for a minimum of 12 months and carry a cumulative grade-point average of 3.0 or higher. Iowa wrestling Academic All-Big Ten honorees include Zach Axmear, Tony Cassioppi, Connor Corbin, Aaron Costello, Zach Glazier, Michael Kemerer, Spencer Lee, Alex Marinelli, Max Murin, Cobe Siebrecht, Justin Stickley, Jacob Warner and Kaleb Young.