THIS WEEK
The University of Iowa women’s tennis team travels to Madison, Wisconsin, to compete at the Big Ten Tournament on Friday at 6 p.m. (CT) inside of Nielsen Tennis Stadium. A link to live results is available on the Iowa women’s tennis schedule page at hawkeyesports.com. Fans are allowed in attendance with local health guidelines and restrictions are followed.

IOWA EARNS No. 4 SEED IN BIG TEN TOURNAMENT
Iowa is the No. 4 seed in the 2021 Big Ten Women’s Tennis Tournament. The No. 40 Hawkeyes finished the conference season 12-4 and earned a double-bye to the quarterfinals. Iowa will play the winner of Nebraska and Maryland/Rutgers. Maryland and Rutgers play Wednesday in the opening round. Iowa is 4-0 this season against Nebrakska, Maryland and Rutgers, having twice beat the ranked Huskers (4-2, 4-1) and winning on the road at Maryland (5-2) and Rutgers (5-2). The No. 4 seed is Iowa’s highest seed at the conference tournament since being seeded No. 4 in 2010. Iowa’s 12 conference wins are the most in school history.

IOWA AT THE BIG TEN TOURNAMENT
Iowa is making its third overall and second straight appearance at the conference tournament under head coach Sasha Schmid. The Hawkeyes were 1-1 in 2019, defeating Indiana, 4-2, in the opening round and losing to Wisconsin, 4-3, in the quarterfinals. Iowa dropped an opening round match to Indiana, 4-2, in 2017. The last time Iowa advanced to the semifinals of the conference tournament was 2010. The Hawkeyes defeated Indiana, 4-1, to reach the semis and lost to No. 4 Michigan, 4-1, in the semifinals.

IOWA EARNS SPOT IN ITA RANKINGS
The Intercollegiate Tennis Association released updated team rankings April 28. The Hawkeyes are ranked No. 42 in the computer rankings. Iowa was previously ranked No. 43 on April 20, No. 39 on April 7, and No. 37 on March 24, the Hawkeyes’ highest team ranking Iowa was ranked No. 30 in 2011.

IOWA RANKED IN COACHES POLL
The Intercollegiate Tennis Association Coaches Poll released their third team rankings on April 28. The Hawkeyes are ranked No. 40. Iowa was previously ranked No.43 on April 21, and No. 41 on April 14. The Hawkeyes are one of four Big Ten Teams in the rankings. The others include are No. 13 Ohio State, No. 18 Michigan, No. 19 Northwestern, and No. 48 Nebraska. 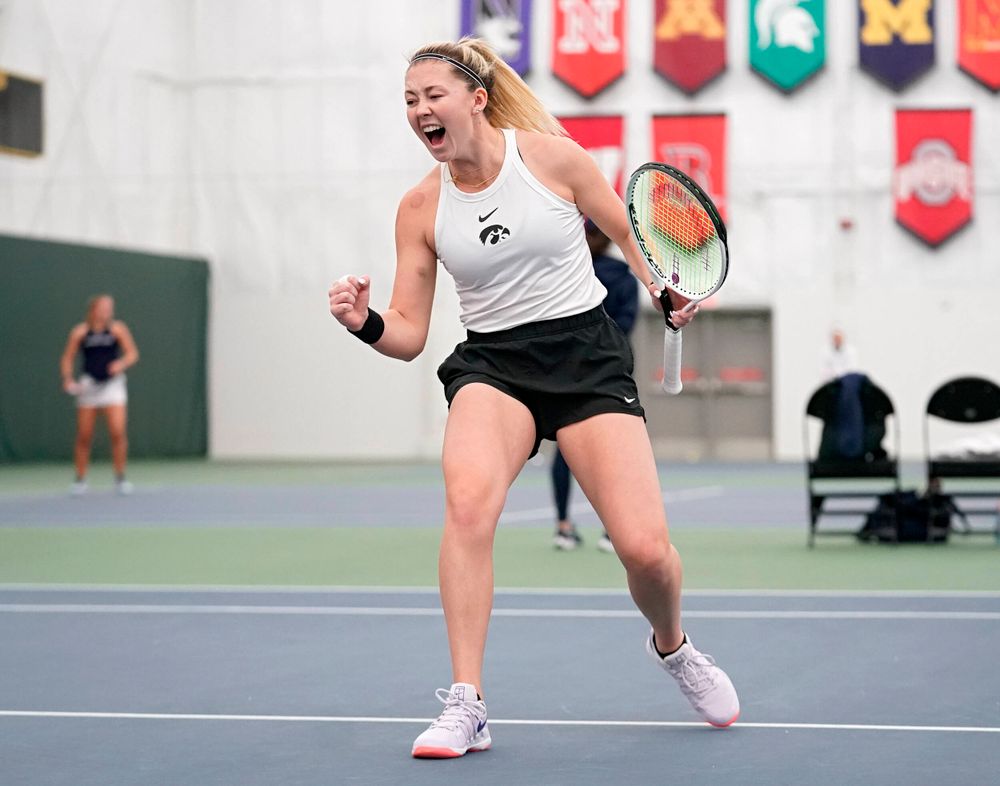 NOEL AND VAN HEUVELEN EARN ITA SINGLES RANKINGS
Freshman Alexa Noel earned a No. 18 ranking and senior Elise van Heuvelen earned a No. 114 ranking in the Intercollegiate Tennis Association singles rankings on April 28. Noel is 22-0 this season and has won 20 of those 22 matches in straight sets, all at the No. 1 position. Van Heuvelen is 18-3 playing No. 2 singles and 16-5 at No. 2 doubles.
This season marks the first time two Hawkeyes have been ranked in the regular season since Meg Racette and Milica Veselinovic were ranked 35th and 80th, respectively, in 2006.

NOEL EARNS BIG TEN ATHLETE OF THE WEEK
Alexa Noel earned her fourth Big Ten weekly honor on the week of April 20 when she was named Big Ten Women’s Tennis Athlete of the Week. A native of Summit, New Jersey. She is 22-0 overall and 16-0 in the Big Ten following a pair of straight set wins at Nebraska against No. 125 Kristina Novak at Nebraska, 6-0, 6-4. The win was her sixth this season against a ranked opponent and clinched Iowa’s school-record 12th Big Ten victory. Noel is one of just three players in Big Ten Conference history to earn the weekly award four times in a single season. Her four career honors ties Sonja Molnar for most in program history. She was previously recognized April 14, March 23 and Feb. 16. Noel is the first player in program history to win the Big Ten weekly honor three times in the same season and one of three players to win the award at least three times in a career.

UNDEFEATED RECORD
Freshman Alexa Noel is 22-0 playing at the No. 1 singles position. She has won 20 of 22 matches in straight sets, including the last 13. She is also 13-6 overall in doubles, teaming with Samantha Mannix at the No. 1 spot. Noel is ranked No. 18 in the ITA singles rankings and reached the highest ranking in program history on April 14 when she was ranked No. 13. She is the third freshman in program history to appear in the ITA national rankings. Sonja Molnar reached as high as No. 75 in 2009 and Sam Mannix was ranked No. 125 in 2019. The complete 2021 ITA rankings are available at wearecollegetennis.com.