IOWA CITY, Iowa — Luka Garza and Jordan Bohannon are co-winners of the Chris Street Award for the 2021 University of Iowa men’s basketball season. The duo are two of eight players who garnered recognition at the team’s award ceremony held Saturday morning at Carver-Hawkeye Arena.

The Chris Street Award is presented annually to a Hawkeye player, or players, who best exemplify the spirit, enthusiasm, and intensity of Chris Street. Street was an Iowa basketball player who died in an auto accident in 1993, midway through his junior year.

Garza and Bohannon become the third and fourth players to earn the program’s most distinguished honor multiple times since 1993.

Garza was the most dominant player in men’s college basketball, sweeping the major postseason awards (Wooden, Naismith, Associated Press, Oscar Robertson, NABC, Lute Olson, Sporting News) to become the program’s first consensus national player of the year. Earlier in the day, Garza was presented the 2021 Naismith Trophy by the Atlanta Tipoff Club. He also was the recipient of the Senior CLASS Award, Pete Newell Big Man of the Year Award, Kareem Abdul-Jabbar Center of the Year Award, Big Ten Player of the Year, and voted to the Big Ten All-Tournament Team.

Garza also earned Iowa’s All-Time Scoring Leader Award and the team’s Best Rebounder Award. The two-time Big Ten Player of the Year broke Roy Marble’s 32-year old scoring record on Feb. 21, 2021. He finished his Hawkeye career with 2,306 points, which ranks seventh best in Big Ten history. Garza controlled a team-best 8.7 rebounds per contest, which ranked fifth best in the league. He grabbed 10 boards or more in 13 contests in 2021, including a season-high 17 rebounds at Minnesota on Christmas Night.

Bohannon averaged 10.6 points, 4.4 assists, and 3.1 rebounds directing and stretching Iowa’s potent offensive attack, which led the Big Ten and ranked fifth nationally. An honorable mention all-conference selection, Bohannon ranked first in the Big Ten in 3-point accuracy (.390), second in assist-to-turnover ratio (3.07) and 3-pointers made per game (2.58), and fifth in assists per game (4.4). His 80 3-pointers in 2021 are fourth most and his 135 assists are ninth most by a senior in program history.

Bohannon holds four Iowa career records: 3-pointers made (364), assists (639), free throw percentage (.887), and games played (143). His 364 triples are second most in Big Ten history. The native of Marion, Iowa, is one of only four Division I players since the 1992-93 season to amass more than 600 assists and 350 3-pointers. Bohannon has accumulated a school-record seven points-assists double-doubles and eight games of 10 or more assists. He is one of 30 Division I players over the last 25 years to make 75+ 3-pointers in four seasons.

Bohannon also earned Iowa’s All-Time Assists Leader Award and was co-winner of the team’s Top Playmaker Award with Connor McCaffery. Bohannon, who has won or shared the award four times, made three or more 3-pointers in 14 games in 2021, including equaling a career-high eight versus Nebraska. McCaffery ranked fourth in the nation in assist-to-turnover ratio (3.73) and 10th in the league in assists per game (3.6). He dished out 112 assists, 11th most by an Iowa junior. McCaffery was also the co-winner of the Academic Excellence Award with Michael Baer for the second consecutive season. 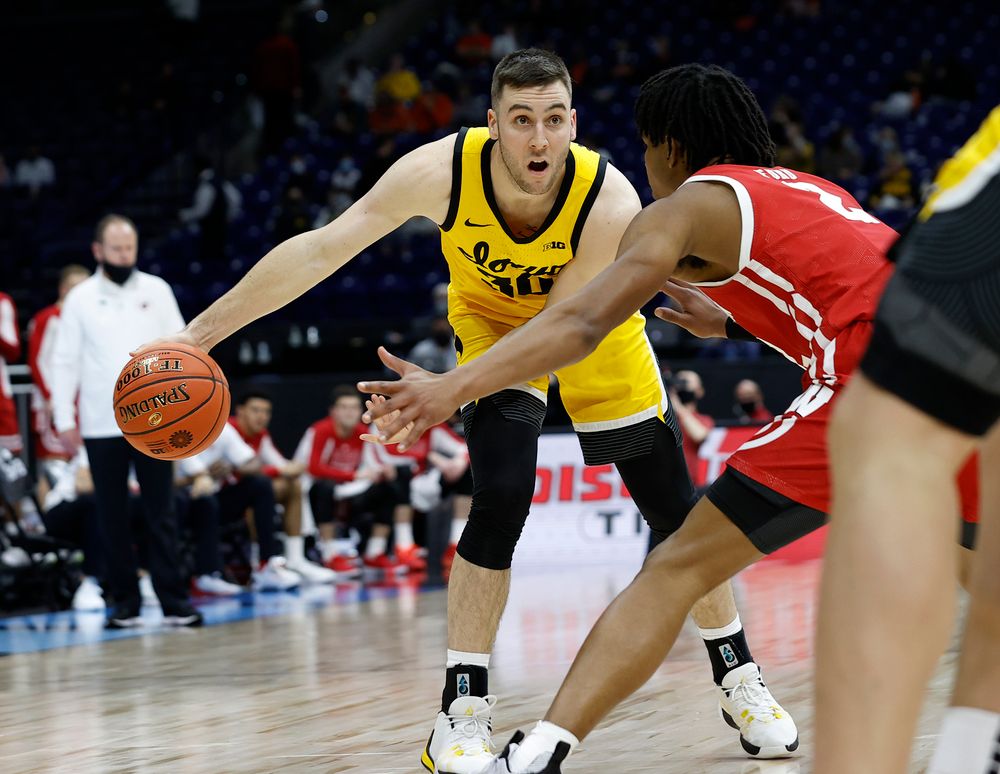 McCaffery excelled in the classroom, earning Academic All-Big Ten accolades for a third consecutive year. The finance major is also one of 10 representatives from the University of Iowa on the Big Ten Anti-Hate And Anti-Racism Coalition. Baer is also a three-time Academic All-Big Ten honoree. He will graduate this month with an economics degree and a leadership & management degree, as well as a minor in sport and recreation management.

Wieskamp and Toussaint were the recipient of the Kenny Arnold Hawkeye Spirit Award. This award is presented to the Hawkeye(s) who exemplifies Arnold’s spirit of leadership, character, courage, determination and poise. This player(s) inspires his teammates to be their very best in spite of the odds. 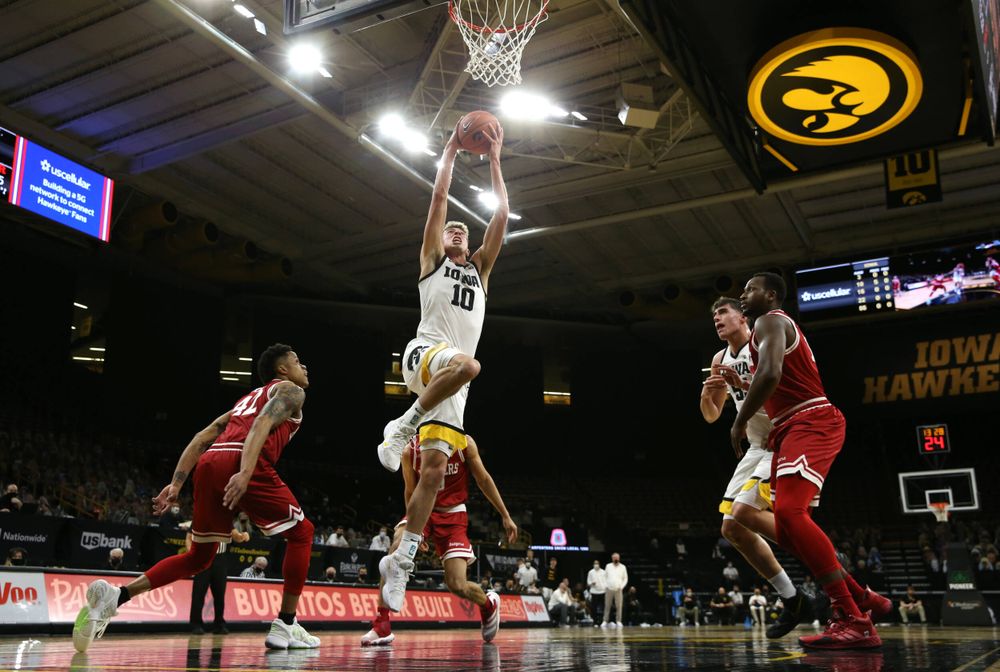 Toussaint competed in all 31 games for the second straight season. He ranked third on the team in steals (24), led the squad in steals six times and assists three times. Toussaint was credited with multiple assists in seven straight games to conclude the season. He posted season bests in scoring versus top-ranked Gonzaga (14), assists versus Iowa State and Ohio State (7), steals at Maryland (6), and rebounds at Northwestern (5). His six steals against the Terrapins tie for the second most in a game in the Fran McCaffery era.

Patrick McCaffery received the team’s the Most Improved Player Award. After missing nearly the entire 2019-20 season, McCaffery was a key contributor off the bench in all 31 games. He averaged 5.2 points and 2.7 rebounds. McCaffery scored in double figures six times, and led the squad in steals five times and blocks four times. He shot 50 percent or better in five of the last six contests, including all four postseason games.

Murray earned the team’s Newcomer of the Year Award. The Cedar Rapids, Iowa, native played in all 31 contests as a rookie, starting four times, and earned All-Big Ten Freshman Team accolades. Murray was one of only five players nationally — and only bench player — to amass 200 points, 35 blocks, 25 steals, and 15 3-pointers. He was the team’s leading scorer (7.8) and rebounder (5.5) off the bench in conference play. Murray led team in blocks 12 times and steals five times. The 6-foot-8 forward was second on the team in steals (26) and ranked 11th in the Big Ten in blocked shots per game (1.26). His 39 blocks tie for fourth most by a freshman in program history. Murray totaled 13 points, seven rebounds, four blocks, three assists, and a steal in Iowa’s victory over Grand Canyon to become the first Hawkeye ever to stuff the stat sheet with those numbers in an NCAA Tournament contest. 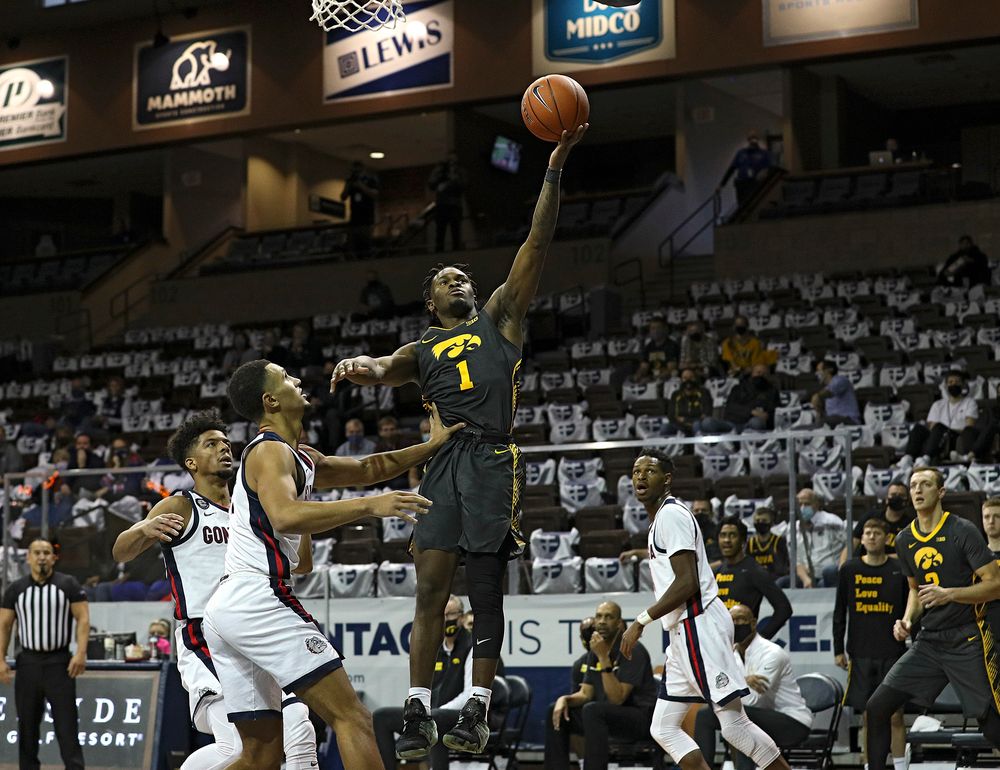