IOWA CITY, Iowa – University of Iowa redshirt senior Ben Norman and redshirt junior Trenton Wallace have been named to the 2021 ABCA/Rawlings Midwest All-Region First Team. The announcement was made by the American Baseball Coaches Association on Wednesday.

Norman and Wallace are Iowa’s first All-Region selections since Tyler Cropley (second team) in 2018. It is the third year under head coach Rick Heller that two Hawkeyes have garnered All-Region honors in the same season.

The duo is now nominated for ABCA/Rawlings All-America honors that will be announced on Saturday. 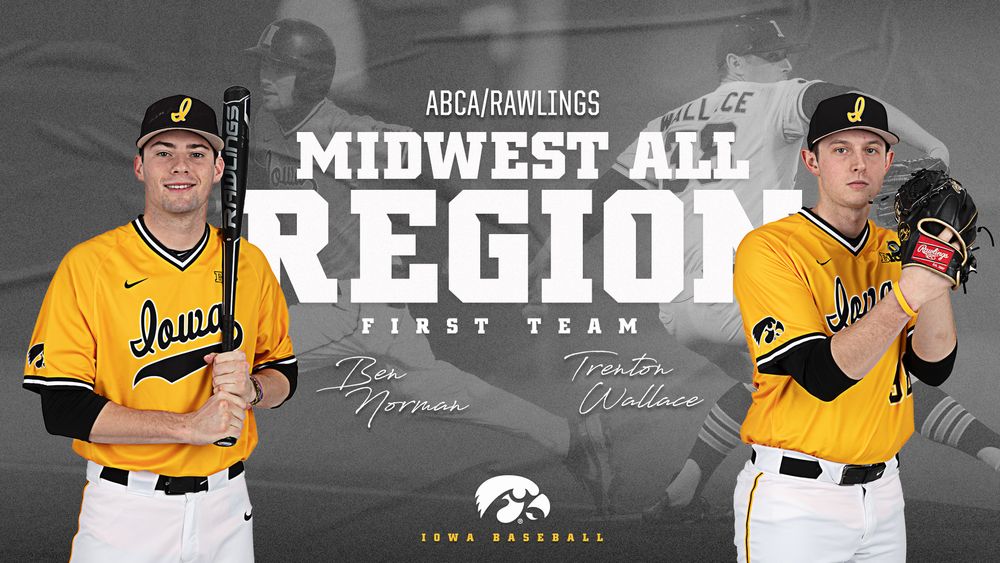 He hit safely in 33 games and reached base safely in 37 contests this season with 15 multi-hit and 15 multi-RBI contests.

Norman finished his Hawkeye career playing in 119 consecutive games dating back to the 2018 season to tie a school record with 220 career games played. He is also ranked sixth all-time in career doubles (46), 11th in career steals (46), and tied for 12th in career singles (131).

Wallace, Iowa’s Friday night starter from Rock Island, Illinois, became the first player in school history to earn Big Ten Pitcher of the Year honors and the ninth Hawkeye under head Coach Heller to earn All-America distinction during the 2021 season.

Over 13 starts, the southpaw finished the regular season with a 7-1 record and a 2.34 ERA with a conference-best 106 strikeouts. His 106 strikeouts are the second-most in a single-season in school history, trailing only Jim Magrane’s 110 strikeouts in 1999. He was also a first-team All-Big Ten honoree.

The fourth-year Hawkeye allowed 20 runs (19 earned) on 54 hits over 73 innings. He allowed two or fewer runs in 10 starts, had eight or more strikeouts in 10 starts and posted eight quality starts.

Iowa won eight straight series openers from April 2 on and with Wallace on the mound, the Hawkeyes won all but two series openers.