IOWA CITY, Iowa – Seven players – six from the Hawkeye State – have signed National Letters of Intent to join the University of Iowa baseball program in the fall of 2022, it was announced Wednesday by head coach Rick Heller.

“This is a talented group that has a good mix of pitchers and position players. We love the make-up of this class and feel that these guys will develop into great college and professional players. There are a lot of “winners” in this group. This is a great class, but we will need to add a few more players this spring to account for possible MLB Draft selections on our current roster.”

All seven recruits are top 500 rated players nationally by Perfect Game and four are inside the top 500 by Prep Baseball Report. All six of the Iowa preps were club baseball teammates under Tim Evans and Wes Obermueller at Iowa Select.

Two of the players – Mitchell and Obermueller — are legacy recruits. Brian Mitchell (1996-99) was a first-team All-Big Ten selection and the Bob Oldis, Jr., MVP recipient in 1997, while Obermueller (1997-99) still ranks fourth in school history in single-season strikeouts (91).  He was a second round 1999 Major League Baseball Draft by the Kansas City Royals.  He played five years in MLB for the Royals, Brewers and Marlins. 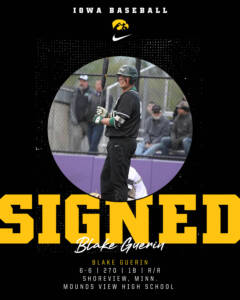 Heller on Guerin:
“Blake is a big, physical right-handed hitter who plays first base. He possesses outstanding power and should be a force in the middle of the lineup someday. Blake has great make-up and will be an outstanding teammate. We look forward to seeing Blake in Black and Gold.” 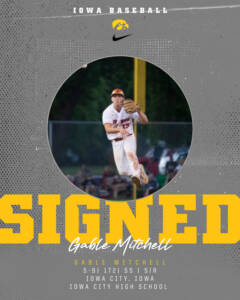 Heller on Mitchell:
“Gable is an excellent defensive infielder and a leadoff type switch hitter at the plate. He is athletic, strong, tough and plays the game the right way. Gable is a driven worker with outstanding leadership potential. He is also a very good football player and wrestler. We are excited Gable will be a Hawkeye.” 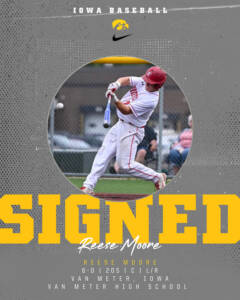 Heller on Moore:
“Reese has had an outstanding high school career at the plate. He possesses power and a disciplined approach, leading the state in walks last year. Reese is a tough, hard-nosed catcher who we feel will be a great leader for us. Reese is also an excellent football player and wrestler. We are looking forward to having Reese on campus next year.” 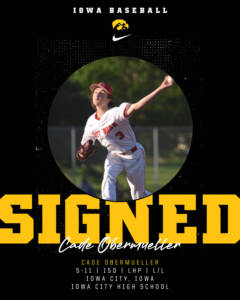 Heller on Obermueller:
“Cade is a wiry, left-handed pitcher with a live fastball and a swing-and-miss breaking ball. He is a tough competitor with great make up and quality leadership qualities. We are super excited that Cade has decided to be a Hawkeye. Cade’s father, Wes, played at Iowa and was a Major League pitcher for the Brewers, Royals, and Marlins.” 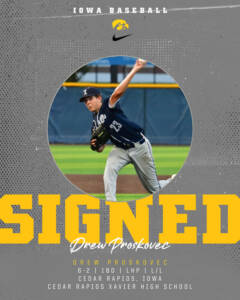 Heller on Proskovec:
“Drew is a left-handed pitcher with a whippy arm, who we feel best years are ahead of him. He is a hard worker and has excellent make-up. We are happy that Drew has chosen to play at Iowa.” 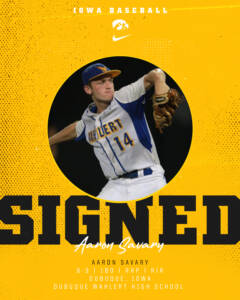 Heller on Savary:
“Aaron had an outstanding junior season leading his team to the state championship game. He has a low 90’s fastball, great breaking ball and changeup. We love the way Aaron competes, his toughness and his work ethic. We feel he will be an excellent leader for us. He also played basketball in high school and we can’t wait to get Aaron on campus. Aaron’s dad played professional baseball.” 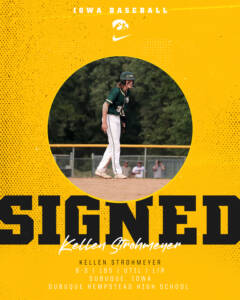 Heller on Strohmeyer:
“Kellen is an athletic infielder who has tremendous speed. He had an outstanding year at the plate last summer as his team made it to the state tournament. Kellen brings versatility to our program with his ability to play several positions. He also plays basketball. We are excited that Kellen has chosen to be a Hawkeye.”