SEASON IN REVIEW
The 2021 Hawkeyes posted a 12-6-2 record and placed fourth in the Big Ten, Iowa’s highest finish in the regular season since 1999. The 12-win season was the seventh in program history and the third in head coach Dave DiIanni’s eight seasons. Fifth-year senior Alyssa Walker anchored an improved Iowa offense that finished in the top half of the conference in points with nine goals and 20 points, while the stout Hawkeye defense posted seven shutouts and held 18 opponents to two scores or fewer through 20 games.

POSTSEASON ACTION
The Hawkeyes headed into the Big Ten Tournament looking to defend their 2020 crown. Fifth-seeded Iowa dispatched No. 4 Michigan State, 1-0, at the DeMartin Soccer Complex, propelled by a second half goal from Alyssa Walker off a fastbreak steal. Goalkeeper Macy Enneking finished with six saves as the sophomore pitched her fourth-straight shutout at the Big Ten Tournament. The Hawkeyes fell in the second round in a close battle at Rutgers; both teams went into halftime scoreless, but a late offensive flurry earned the Scarlet Knights the 2-0 victory.

RYDBERG, WALKER AND WHEATON EARN ALL-REGION HONORS
Seniors Hailey Rydberg, Alyssa Walker and Sara Wheaton were named to the United Soccer Coaches North Region Third-Team. The all-region honor is the first for all three players and marks just the second time in program history three Hawkeyes have been named to an all-region team in the same season. Cloe Lacasse, Melanie Pickert and Alex Melin were recognized in 2013.

Rydberg, a third-team all-Big Ten selection, shared Iowa’s team MVP honors for the second straight season. She recorded two goals and a team-high seven assists, totaling 11 points from the midfield. She played 1,643 minutes, the third most on the team. Rydberg and Wheaton were the only Hawkeyes to start each of Iowa’s 20 games.

Wheaton was a second-team All-Big Ten honoree and shared team MVP honors with Rydberg. She played the entire contest in 19-of-20 games and logged a team-high 1,826 minutes. She was also voted Iowa’s Defensive Player of the Year for the second straight season. In 2021, she scored one goal and contributed three assists while anchoring a defense that allowed fewer than one goal per game.

Walker paced the Hawkeye offense, scoring nine goals and adding a pair of assists while totaling 20 points. The nine goals in a single season tie for 11th in program history. Four of Walker’s nine goals were game-winners. She started in 19-of-20 games played and was named third-team all-Big Ten and Iowa’s Offensive Player of the Year.

DIIANNI CLOSES IN ON MILESTONES
Iowa head coach Dave DiIanni earned his 300th career win on Oct. 21, a 1-0 win over Minnesota. DiIanni has 19 years of collegiate head coaching experience, including 11 at Grand Valley State and eight at the University of Iowa, combining for a record of 301-81-29. DiIanni is the third active Big Ten coach to reach 300 career wins, joining Nebraska’s John Waller (338) and Maryland’s Ray Leone (309). Iowa’s win in the opening round of the conference tournament at Michigan State was DiIanni’s 80th win as a Hawkeye, tying Ron Rainey as the program’s all-time leader. 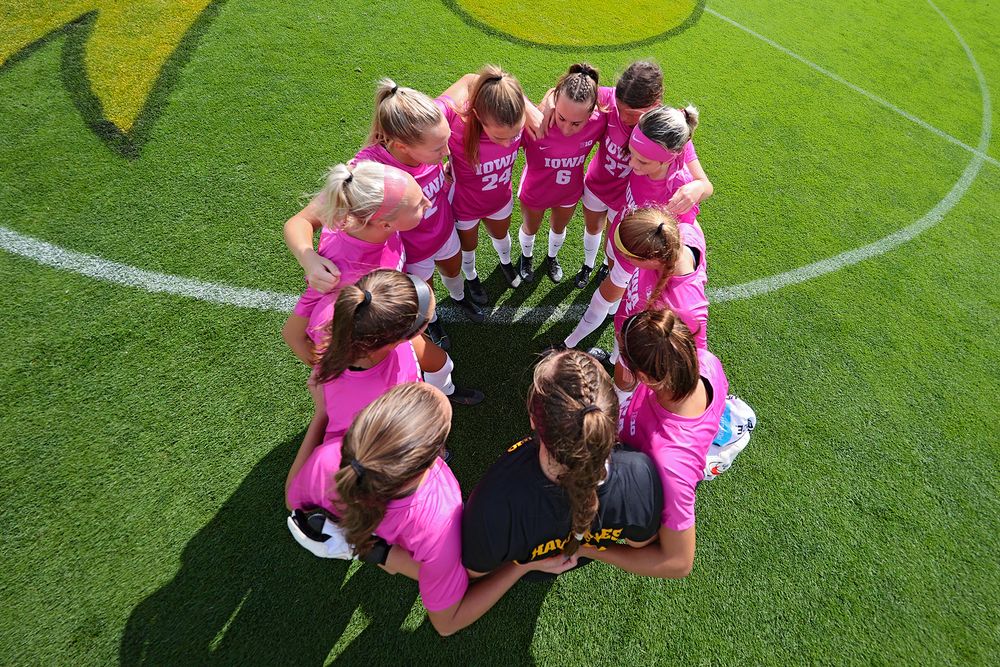 POWELL PLAYS FOR FAMILY
Graduate student Courtney Powell transferred to Iowa from Iowa State in 2021 and played her final collegiate season as a tribute her father, a lifelong Hawkeye fan who passed away due to COVID-19. Powell’s season-high 81 minutes and early goal were crucial in putting the Cyclones away in Iowa’s 2-1 Cy-Hawk victory Aug. 26.

YOU CAN CALL IT A COMEBACK
Iowa orchestrated the largest comeback in program history on Oct. 14, erasing a 3-0 deficit at Nebraska on the road at Hibner Stadium and scoring four unanswered goals.

A goal in the seventh minute of action by Cornhusker Elenore Dale set the tone for most of the first half, and the Huskers took a 3-0 lead six minutes before the break off of a pair of scores from Sarah Weber.

Then, three minutes before the half, Sara Wheaton launched a perfect ball from midfield down to Alyssa Kellar who served the ball to Courtney Powell for a smooth Hawkeye goal.

Iowa continued to chip into the Husker lead when Hailey Rydberg drilled a penalty kick for Iowa’s second score four minutes into the second half to cut Nebraska’s lead to one. Iowa earned the equalizer at the 64th mark when Samantha Cary floated the ball into the box to set up a laser to the back-right corner of the net from Kenzie Roling.

History repeated itself with nine minutes to play, as Cary again sent a ball into the box to force a scrum, and Iowa’s leading scorer Alyssa Walker connected on a header and bounced the game-winner into the lower left corner to give the Hawkeyes the lead.

LOOKING AHEAD
Eight student-athlete have signed national letters of intent to join the Hawkeye program in 2022. The 2022 recruiting class includes class includes one forward, one goalkeeper, two midfielders, and four defenders. That class is represented by six states. They include Iowa (Vonderhaar and Woods), Michigan (Fife and Kozicki), Colorado (Formanek), Illinois (Hahn), North Carolina (Skibo) and Missouri (Welker).