THIS WEEK
The University of Iowa baseball team opens the 2022 season at the Swig & Swine Classic at Shipyard Park in Charleston, South Carolina, from Feb. 18-20. The Hawkeyes will face Air Force in its season opener on Friday at 11 a.m. (CT) at Wando River Field before squaring off against Ball State and Bucknell on Saturday and Sunday at 9 a.m. Saturday and Sunday’s games will be played on Detyens Field.
• Weekend passes are available (on Friday only) for $25 for adults and $20 for students/seniors (65+)/Military with ID. Daily passes are $10 for adults, $8 for S/S/M.

LEADING OFF
• The Hawkeyes won seven of their final 10 series to finish the regular season with a 26-18 record in Big Ten-only competition in 2021. Iowa tied for fourth in the league standings, its third top five finish in the Rick Heller era.
• Iowa’s 26 Big Ten victories were the most in a single-season in school history. The Hawkeyes went 22-6 during the 1990 season en route to the Big Ten regular season title.
• The Hawkeyes are picked as an NCAA Regional team by D1Baseball.com and Baseball America in 2022 and are tabbed to finish in the top four of the Big Ten standings. Redshirt sophomore RHP Adam Mazur is a preseason All-Big Ten selection by Perfect Game, while RHP Marcus Morgan was tabbed as D1Baseball’s Preseason Big Ten Freshman of the Year.
• All three of Iowa’s opening weekend starters will be making their Hawkeye debuts this weekend in Charleston, South Carolina.
• Senior Dylan Nedved and redshirt sophomores Adam Mazur and Peyton Williams were named Big Ten Players to Watch. The Hawkeyes were picked to finish third in a vote of the league’s head coaches.
• Nedved was also named to the NCBWA Closer of the Year Watch List. He tied for second in the Big Ten with nine saves last season.
• Seniors Cam Baumann, Brett McCleary and Nedved, redshirt junior Brendan Sher and redshirt sophomores Brayden Frazier and Ty Snep were voted team captains for the 2022 season.
• Iowa has advanced to the postseason in six of Heller’s eight seasons (there was no Big Ten/NCAA Tournament in 2020 and no Big Ten Tournament in 2021 because of COVID). He has led the Hawkeyes to two NCAA Regional appearances (2015, 2017).

OF NOTE
• Redshirt junior Izaya Fullard closed out the season riding a career-long 27 game reached base streak. It was the longest streak by a Hawkeye in 2021.
• Redshirt sophomore Peyton Williams will play with the Cotuit Kettleers in June in the Cape Cod League.
• Iowa’s 2022 newcomer class (transfers and freshman) is rated as the 23rd-best recruiting class in the country by D1Baseball.com.

FRONTLINE TRANSFERS
Iowa added a pair of Friday night starters to the 2022 roster as transfers in RHP Adam Mazur (South Dakota State) and RHP Connor Schultz (Butler).
• Mazur, who was tabbed as a first-team All-Big Ten selection by Perfect Game, went 3-9 with a 5.50 ERA in 16 starts in two seasons with the Jackrabbits. The Minnesota native had a breakout season in the Cape Cod League, going 3-0 with a 1.55 ERA in six starts en route to Cape Cod All-League honors.
• Mazur is rated as the No. 89 player on MLB.com’s top-100 draft prospects, while being the No. 2 draft prospect in Big Ten and No. 61 nationally by D1Baseball.com.
• Schultz is a graduate pitcher from Butler University where he went 13-9 with a 3.79 ERA in four collegiate seasons. The Cedar Falls, Iowa, native was a first-team All-Big East selection in 2019 and was the Big East Preseason Pitcher of the Year in 2020. Schultz battled hip injuries in each of the past two seasons.

FRESHMEN PHENOMS
The Hawkeyes signed a pair of high-end pitchers in freshman right-handers Brody Brecht and Marcus Morgan. Brecht is from Ankeny, Iowa; Morgan is from Iowa City.
• Brecht is rated as the top incoming recruit in the Big Ten and No. 9 nationally by Perfect Game, while being tabbed as the No. 4 impact recruit in the Big Ten by D1Baseball.com.
• Morgan was named D1Baseball.com’s Preseason Big Ten Freshman of the Year and the top impact freshman in the league.
• Morgan is the first freshman to be in the starting rotation to start the season under head coach Rick Heller. (LHP Jack Dreyer started four games (late in the season) during his true freshman season in 2018.)

NEDVED NAMED TO CLOSER OF THE YEAR WATCH LIST
Senior Dylan Nedved has been named to the NCBWA Closer of the Year Watch List for the 2022 season. The Kansas native went 4-1 with a 4.19 ERA with nine saves over 20 appearances last season. The nine saves ranked second in the Big Ten Conference.

WHO’S AT FIRST? PEYTON IS AT FIRST.
Redshirt sophomore Peyton Williams returns to Iowa’s roster for this third season as a starter after battling injuries throughout much of the 2021 season. The Johnston, Iowa, native still managed to start 36 games last season, where he hit .295 with 15 doubles, six home runs, 27 RBIs and 34 runs scored. Williams, who led the Big Ten in walks, slashed .295/.582/.470. 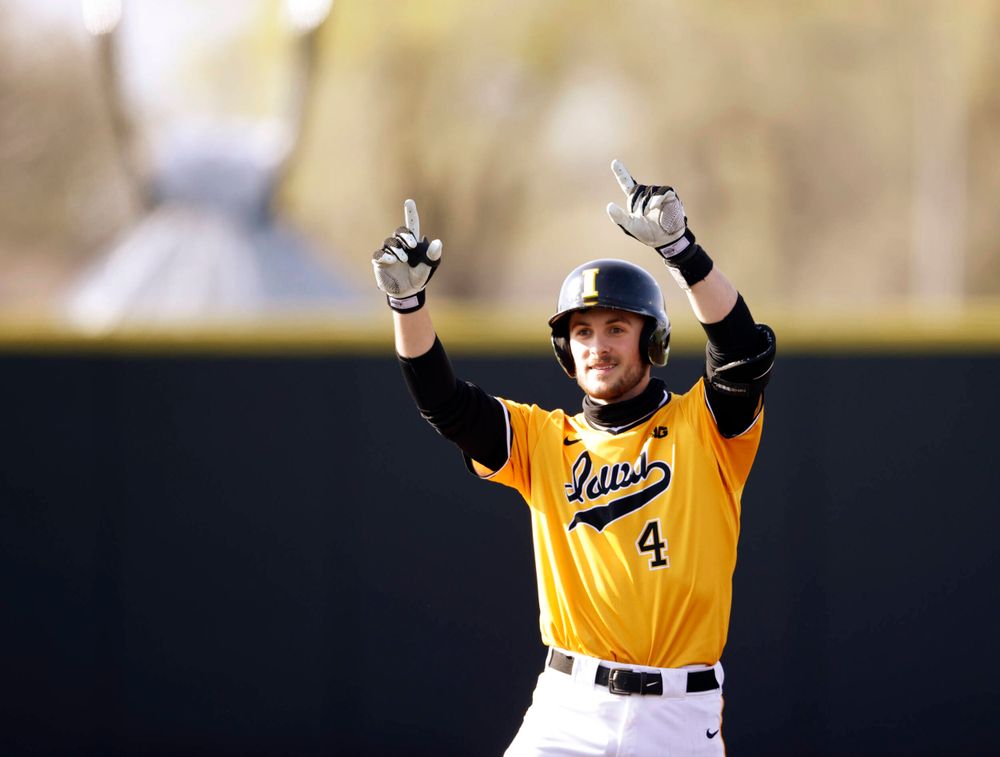 SCOUTING AIR FORCE
• The Falcons went 26-22 overall during the 2021 season, which included an 18-16 record in the Mountain West Conference — the program’s first winning season conference play in school history. Air Force is selected to finish third in the MWC by D1Baseball.com.
• Falcon utility player Paul Skenes is the D1Baseball MWC Preseason Player of the Year and he was named to the Golden Spikes Award Preseason Watch List. Skenes will start on the mound against Iowa on Opening Day. Last season Skenes tallied 11 saves as the Air Force closer, going 1-1 with a 2.70 ERA. He also hit .410 with 11 home runs and 43 RBIs as a true freshman.

SCOUTING BALL STATE
• The Cardinals posted a 38-18 overall and 29-11 record in 2021 to finish as the Mid-American Conference runner-up. Ball State is projected to finish as the league runner-up again in 2022 by D1Baseball.com and in the MAC Preseason Coaches’ Poll.
• The Hawkeyes will face LHP Tyler Schweitzer, who was 1-0 with a 5.35 ERA in 23 appearances last season. Schweitzer had two saves and punched out 51 over 35 1/3 innings.

DON’T COUNT ‘EM OUT
The Hawkeyes have overcome deficits to win 63 games since the start of the 2017 season and posted 15 walk-offs. Thirty of those victories have come with Iowa trailing or being tied entering or through seven innings. Twenty have come in the final at-bat.
• The Hawkeyes overcame deficits in 19 games in 2021. The team was 12-7 in such contests.

#HELLERBALL
• Head coach Rick Heller recorded his 900th career win against Grand View in a 15-2 victory on March 3, 2020, at Duane Banks Field
• Heller is one of nine coaches all-time to lead three different NCAA Division I teams to regional play.
• The Hawkeyes have won 30 or more games in each of Heller’s six full seasons as the helm of the program. It’s a first for the team since winning 30 or more in seven straight seasons from 1979-85.
• Heller has led the Hawkeyes to two NCAA Regional appearances; the program had three regional appearances in its history prior to his arrival.
• Heller is third in school history in career wins with 240 at Iowa, including the second (41) and fifth-most (39) in school history.
• Heller led Iowa to its first Big Ten Tournament title in 2017 — the first conference title since 1990 — and he guided the Hawkeyes to the Big Ten Tournament title game in consecutive seasons. Iowa has advanced to the league tournament in six straight years for the first time in program history.
• Heller has coached at least one first-team All-Big Ten selection in six of his first eight seasons, and has 21 Major League Baseball Draft picks in seven seasons — the most in a six-year stretch in school history.
• Iowa had a school-record six All-Big Ten selections in 2015 and five in 2017. The Hawkeyes have had 26 All-Big Ten honorees in eight seasons under Heller.
• Iowa has posted winning streaks of nine games (in 2015) and eight games (in 2017) — the longest streaks for the program since 2012.