ON THE MAT
The University of Iowa wrestling team competes at the 2022 Big Ten Championships on Saturday and Sunday at Pinnacle Bank Arena in Lincoln, Nebraska. The two-day event begins Saturday at 10 a.m. (CT). Session II starts Saturday at 5:30 p.m. Session III begins Sunday at 11 a.m., followed by the finals at 3:30 p.m. Sessions I, II and IV will be televised by BTN. All four sessions are streamed at B1G+.

AUTOMATIC QUALIFIERS
The Big Ten Championships is one of seven NCAA qualifying tournaments across the country. The NCAA has awarded the conference 88 of the 287 automatic qualifying bids for the national championships in Detroit on March 17-19. The Big Ten was allotted more bids than any other conference. The league will have seven automatic qualifiers at 141, 149, 157 and 165, eight automatic qualifiers at 174, nine at 285, 10 at 125 and 133, 11 at 197 and 12 at 184. After all of the qualifying events have concluded, the NCAA Division I Wrestling Committee will meet in-person to select the remaining 43 at-large qualifiers. All weight classes will consist of 33 wrestlers. Coaches’ ranking and RPI are two of several criteria that will be evaluated during the at-large selection and seeding process along with head-to-head competition, quality wins, conference tournament placement, results versus common opponents and win percentage.

WRESTLER OF THE CHAMPIONSHIP
Since 1989, the year the Big Ten record book first recognizes the award, nine different Hawkeyes have been named Wrestler of the Big Ten Championships. Alex Marinelli won the award in 2019 after winning the 165-pound bracket. He shared the award with Penn State’s Jason Nolf. Head coach Tom Brands won the award in 1989 following his 126-pound conference title. Associate head coach Terry Brands won the honor following his 126-pound Big Ten title in 1992. Brent Metcalf is the only Big Ten athlete to win the award twice (2008, 2009).

BIG TEN TOURNAMENT CHAMPIONS
The Hawkeyes’ 117 Big Ten champions have won a total of 207 conference titles. There have been seven four-time, 19 three-time and 31 two-time winners. The Hawkeyes have won 37 team titles, twice as many as the next closest school (Illinois, 17). Iowa won 25 consecutive conference championships from 1974-1998.

TOURNAMENT EXPERIENCE
The Hawkeyes return eight of 10 wrestlers from their 2021 Big Ten and NCAA championship lineup. Iowa has a new face at 125 in freshman Drake Ayala, and a returning name at 184 in sophomore Abe Assad. Assad is making his second postseason appearance. He placed fourth at 184 pounds when Iowa won the 2020 Big Ten Championships in Piscataway, New Jersey.

Alex Marinelli and Michael Kemerer are competing at the Big Ten Championships for the fifth time in their careers. Marinelli is the three-time defending 165-pound champion. He is 11-3 all-time in the tournament and has won nine straight matches. He was 3-0 at the tournament in each of the last three years. He was named co-wrestler of the championships in 2019. He placed sixth as a redshirt freshman in 2018, going 2-3 in five matches.

Kemerer is the defending Big Ten champion at 174 pounds. He went 3-0 last season with wins over Jarred Krattinger, Logan Massa and Carter Starocci. Kemerer was runner-up at 174 pounds in 2020. He competed at 157 pounds in 2017 and 2018. He missed 2019 with an injury. He is 9-3 all-time at the conference championships. He was runner-up as a redshirt freshman in 2017, going 2-1 overall. He placed sixth in 2018, going 2-1 before injury defaulting from the tournament.

Four Hawkeyes, Austin DeSanto, Max Murin, Kaleb Young and Jacob Warner, are making their fourth straight Big Ten tournament appearances. DeSanto was runner-up in 2021 and placed fourth in 2019 and 2020. He is 7-5 all-time at the conference tournament. Murin placed seventh in 2019 and fifth in 2020 competing at 141 pounds. He is did not place in 2021, his first season at 149 pounds. Young placed fourth in 2019 and runner-up in 2021. He did not place in 2020. Warner has placed third on the podium the last three years. He is 12-3 all-time at the Big Ten Championships, including an 8-0 mark on the consolation side of the bracket.

Tony Cassioppi is making his third tournament appearance. He placed third at heavyweight in 2020 and third in 2021. He is 8-2 all-time at the conference tournament. In 2021, he pinned Maryland’s Garrett Kappes in 23 seconds, matching the fastest Big Ten tournament pin by a Hawkeye (Bart Chelesvig, 1992). The 23-second fall ties for the third fastest in tournament history.

Abe Assad returns to the postseason lineup after missing 2021 due to injury. Assad placed fourth at 184 pounds when the Hawkeyes won the Big Ten championship in 2020. Jaydin Eierman is also making his second career Big Ten tournament appearance. Eierman won the 141-pound title in 2021. He won three MAC titles from 2017-19.

Freshman Drake Ayala is making his Big Ten Championships debut. Iowa’s 125-pounder has wrestled in three tournaments this year, placing first at the Harold Nichols Open and runner-up at the UNI Open. Ayala placed third at the Southern Scuffle.

BIG TEN TEAM RECORDS
Iowa holds the record for most individual champions in a single conference championships with nine in 1983. The Hawkeyes had eight in 1985, and crowned seven in 1981, 1982, 1984 and 1986. The conference record for most falls in a tournament belongs to the Hawkeyes, who recorded 12 pins in 1979. The largest margin of victory by a champion also belongs to Iowa. The 1983 Hawkeyes scored 200 points, 118.5 more than second-place Michigan State (81.5).

MARINELLI AIMS FOR THE GRAND SLAM
Senior Alex Marinelli is the three-time defending Big Ten champion, winning the 165-pound title in 2019, 2020 and 2021. In 2019, he was named Big Ten Co-Wrestler of the Tournament. He is seeking to become the eighth four-time conference champion in school history and the 17th four-time champion in Big Ten history.

A LOOK BACK AT 2021 BIG TEN CHAMPIONSHIPS
The top-ranked University of Iowa wrestling team won the 2021 Big Ten Championship on March 7 in in University Park, Pennsylvania, scoring 159.5 team points and crowning four individual champions. The Hawkeyes’ 159.5 points were their most since 1995 (185). Iowa won the team race by 35.5 points, the largest margin of victory by a conference champion since Iowa won by 37 points in 2010. Iowa’s team title was the 37th in program history, more than any other school in the Big Ten. Iowa crowned four individual champions (Spencer Lee, Jaydin Eierman, Alex Marinelli, Michael Kemerer) en route to its sixth conference title under Brands. It was the first time since 2001 Iowa crowned four individual champions at the Big Ten Championships (Eric Juergens, Doug Schwab, Jody Strittmatter, T.J. Williams). 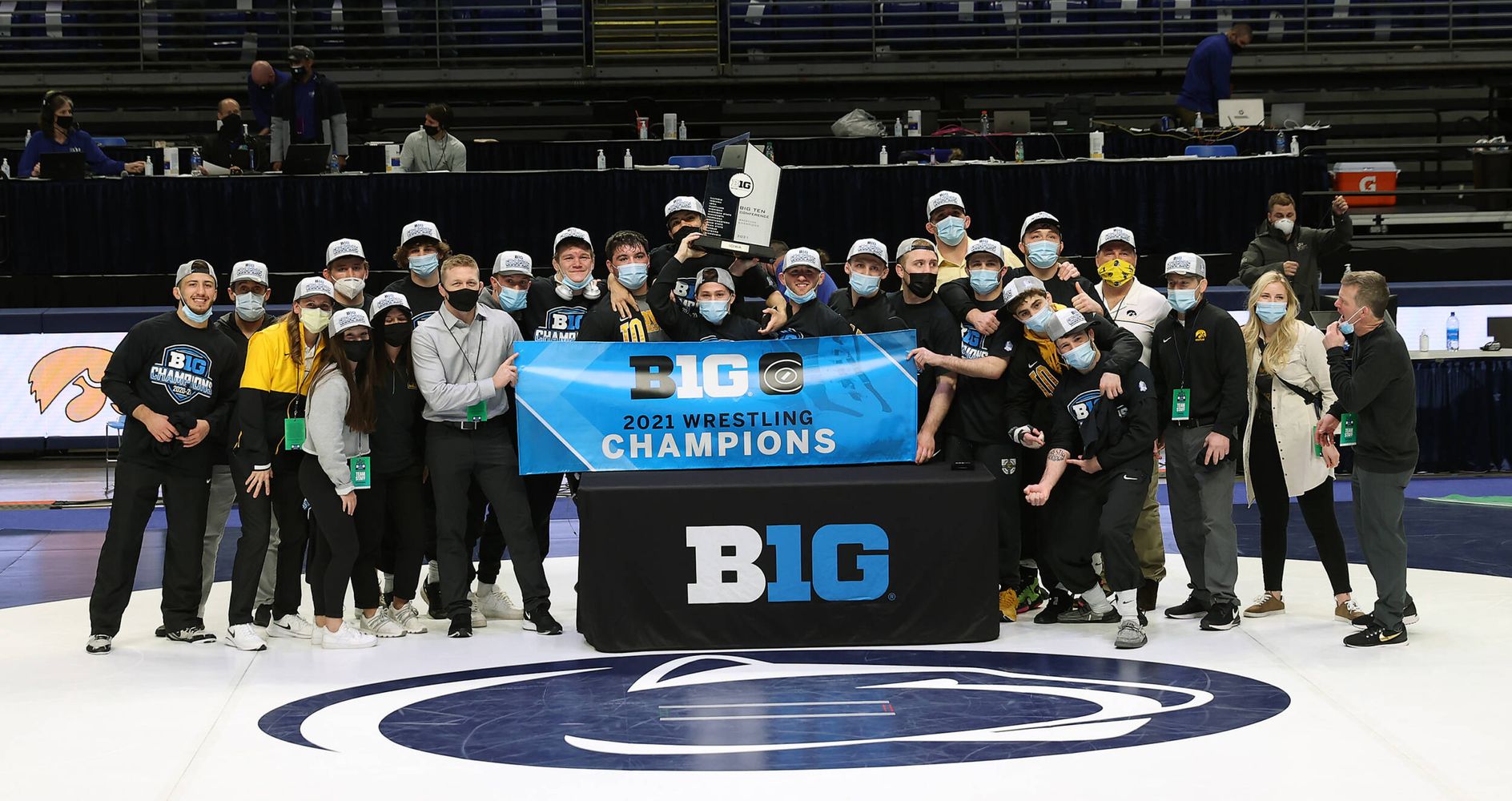