IOWA CITY, Iowa – Eleven players — four from the Hawkeye State — have signed National Letters of Intent to join the University of Iowa baseball program in the fall of 2023, it was announced Wednesday by head coach Rick Heller.

All 11 recruits are top 500 rated players nationally by Perfect Game and two are inside the top 500 by Prep Baseball Report. 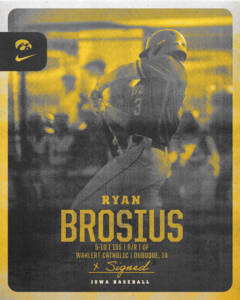 Heller on Brosius:
“Ryan will join us after a prolific multi-sport career at Wahlert.  He possesses elite level speed that will affect the game both offensively and defensively.  We’re excited about the way Ryan plays the game and type of teammate he is.  Our baseball program is getting an unbelievable competitor and we can’t wait for Ryan to be on campus.” 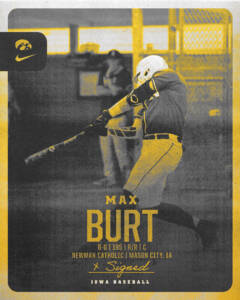 Heller on Burt:
“Max is one of the most decorated athletes ever to play at Newman Catholic.  He is a natural born leader who has been the starting point guard, quarterback and catcher for four plus years. Max will bring middle of the order power potential and the ability to handle a pitching staff to our program. We’re excited about Max’s ability to be a leader for our team for years to come.” 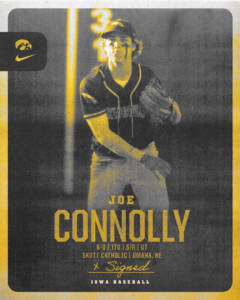 Heller on Connolly:
“Joe is a switch hitter with the ability to defend all over the field. He was an all-state performer in Nebraska last summer. We’re excited about the athleticism Joe has shown across multiple sports, including game-changing speed. We know we are getting someone who loves to play baseball, which is a perfect fit for Iowa baseball.” 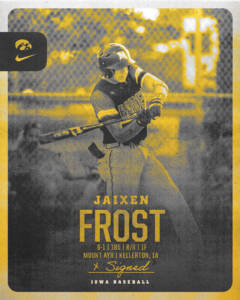 Heller on Frost:
“Jaixen has rewritten the record books at Mount Ayr in football, baseball and basketball. As Jaixen transitions to a baseball-only focus, the sky is the limit for him. He has always been a leader on his teams as well as truly humble. We look for Jaixen to come in and compete on the infield as well as be an impactful offensive force in the Iowa lineup. Hawkeye Nation should be excited to see Frost in black and gold next fall.” 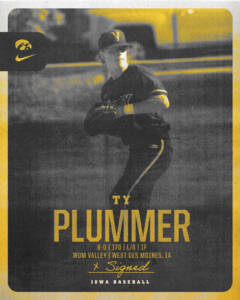 Heller on Plummer:
“The best way to describe Ty is ‘baseball player’. He comes from a great baseball family and has grown up around the game. Ty is a left-handed hitter, who we feel can compete for time on the infield or the outfield. His versatility is a great advantage for him. We’re excited at Ty’s leadership qualities and work ethic. Both of those will make immediate impact on our baseball program.” 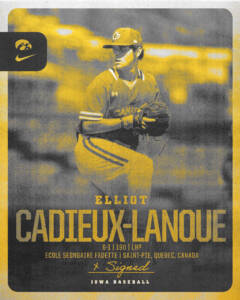 Heller on Cadieux-Lanoue:
“Elliot is one of the best LHP in Canada and we’re elated he is a Hawkeye. He possesses a fastball in the low 90’s and the ability to command three pitches. Those qualities, along with being a top-notch competitor, are going to give him the chance to make an impact early in his Hawkeye career. He has spent the last year competing on the Canadian National Team, which will prepare him to hit the ground running in Iowa City.” 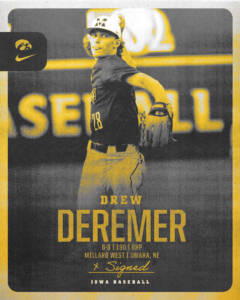 Heller on Deremer:
“Drew comes to us following a Nebraska State Championship this past summer. Drew is a winner. Every time we went to watch him pitch, he put his team in a position to win the game. Drew’s arsenal includes a low 90’s fastball and the ability to command a slider and changeup. We love Drew’s competitiveness and continued development this past year. Our baseball program can’t wait to welcome Drew to campus.” 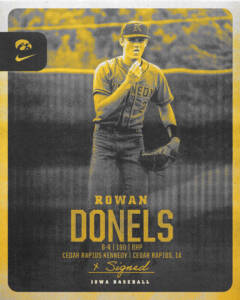 Heller on Donels:
“Rowan has continued to impress us with his work ethic and focus. He possesses a fastball that has gotten into the low 90s and swing/miss type breaking ball. We are excited to work with him watch him grow. He has barely scratched the surface on who he can be on the mound. Rowan will be a great addition to our program.” 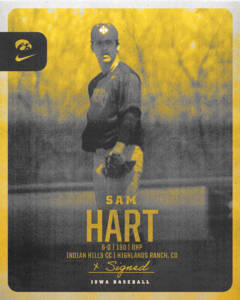 Heller on Hart:
“We’ve been lucky enough to have a great run of pitchers to close out baseball games in our time at Iowa. We believe Sam is the next in that line. Sam has a low 90’s fastball from a 3/4 arm slot and plus slider. He has the perfect mentality of a person you want to give the ball to at the end of the game. Sam is a tremendous student and someone who has the qualities to be a leader on our pitching staff.” 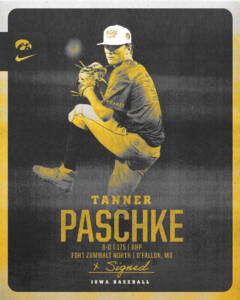 Heller on Paschke:
“Tanner may have one of the best sliders in the Midwest. He routinely will hit spin rates over 3,000 and his fastball will climb into the low 90s. We’re excited about his work ethic and the way he competes on the mound. Tanner’s raw stuff will give him the chance to impact our pitching staff quickly. Our staff can’t wait for Tanner to be in Iowa City.” 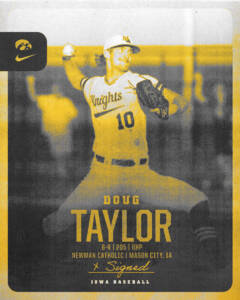 Heller on Taylor:
“Doug is another multi-sport star that we can’t wait to have in Iowa City. He has been a five-year starter on the baseball team at Newman as well as an all-state performer in both football and basketball. He can run his fastball into the low 90s and command the zone with a slider/changeup combo. Doug has done nothing but win for five years across multiple sports. Our program is getting a hard worker who is driven by a goal of being great. We can’t wait to welcome Doug to Hawkeye Nation.”