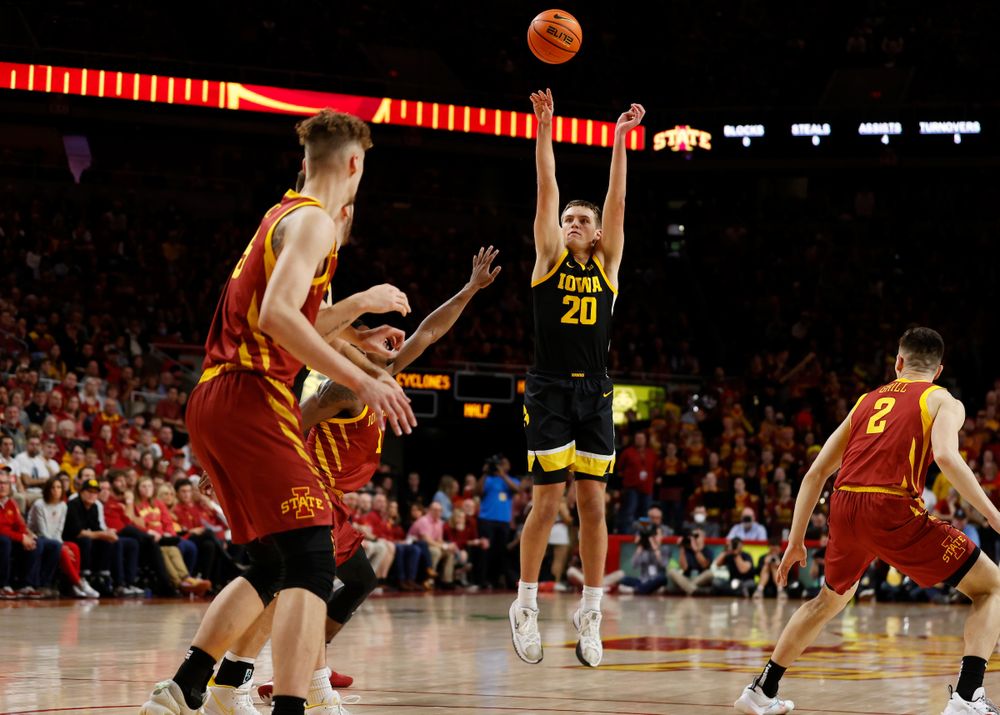 Iowa (6-2) returns home for a Thursday game versus No. 20 Iowa State (7-1). Tipoff for the Iowa Corn Cy-Hawk Series contest is set for 7:01 p.m. (CT) on Mediacom Court at Carver-Hawkeye Arena in Iowa City.

TV: Thursday’s game will be televised nationally on FS1. Kevin Kugler and Nick Bahe will call the action.

No. 15 Duke outscored Iowa by six points in each half in a 74-72 Blue Devil victory Tuesday evening in the Jimmy V Classic at Madison Square Garden in New York.

Iowa holds a 47-28 advantage in the series. Iowa has won four of the last six overall meetings.

Iowa holds a 30-7 edge in games played at Iowa City, with the Hawkeyes winning seven of the last nine meetings in Carver-Hawkeye Arena, including three straight. Iowa beat the Cyclones, 101-77, in the last game contested between the two teams in Iowa City in 2020.

Iowa State enters this week with an 11-2 advantage in the annual Iowa Corn Cy-Hawk Series. The Cyclones clinched victories in soccer, volleyball, football, and men’s and women’s cross country, while the Hawkeyes won earlier this week in wrestling.

FRESHMAN PROVIDING SPARK OFF THE GLASS

True freshman Dasonte Bowen has provided a spark off the bench after one month. In games in which he has played double-digit minutes (6), he has scored six or more points in each contest. He has netted eight or more points in three of Iowa’s last four games, including totaling a personal-best 12 points against No. 15 Duke Tuesday night in Madison Square Garden.

McCaffery is averaging 5.3 points and 3.3 rebounds per game, and has made 9-of-16 (.563) from 3-point range this season. He posted his first career double-double last week versus Georgia Tech (10 points; 10 rebounds).

Patrick McCaffery netted double figures in scoring 11 of the last 18 games played last season. He made at least one trey in 12 of the last 18 games, including sinking multiple triples in six contests during that stretch. McCaffery has carried that momentum over to his junior season, netting double figures in six of Iowa’s first eight games of the season. McCaffery scored a personal-best 21 points in back-to-back games two weeks ago versus North Carolina A&T and Clemson.