Lee was one of three Hawkeyes to post a bonus point win and Iowa won seven of the 10 matches on the night to improve to 10-0 overall and 3-0 in Big Ten action.

In the final match of the dual, Lee led 2-1 when he took No. 3 Michael DeAugustino down and to his back for a 2:01 fall. It was his fourth straight fall (fifth of the season) and it ran his winning streak to 46 matches – tied for the ninth longest streak in program history.

The Pennsylvania native is 8-0 this season with eight bonus point victories – five falls, two majors and one technical fall on the year.

“They should wrestle Spencer Lee last every match… that’s what it is supposed to look like,” said Brands.

Northwestern won the first match of the evening, courtesy of No. 10 Chris Cannon’s 4-1 victory over No. 17 Cullan Schriever at 133. Iowa’s No. 2-ranked Real Woods followed with a tech fall win over No. 6 Frankie Tal-Sharar at 141 to give the Hawkeyes a 5-3 lead.

Woods registered his first takedown less than 10 seconds into the match before using three four-point tilts to build a 14-0 lead after the first period. The New Mexico native had an escape in the second and third periods and used a riding time point to post his fourth tech fall and sixth bonus point win this season.

There’s levels to this. 😤

“It’s important to me (to start fast), I like to put points on the board,” said Woods. “The best way to do that is to start right away and give yourself as much time as possible.

“My top game I feel like is top tier and I want to take advantage of that every time. When I get a takedown, that’s what I am looking for to get my turns.” 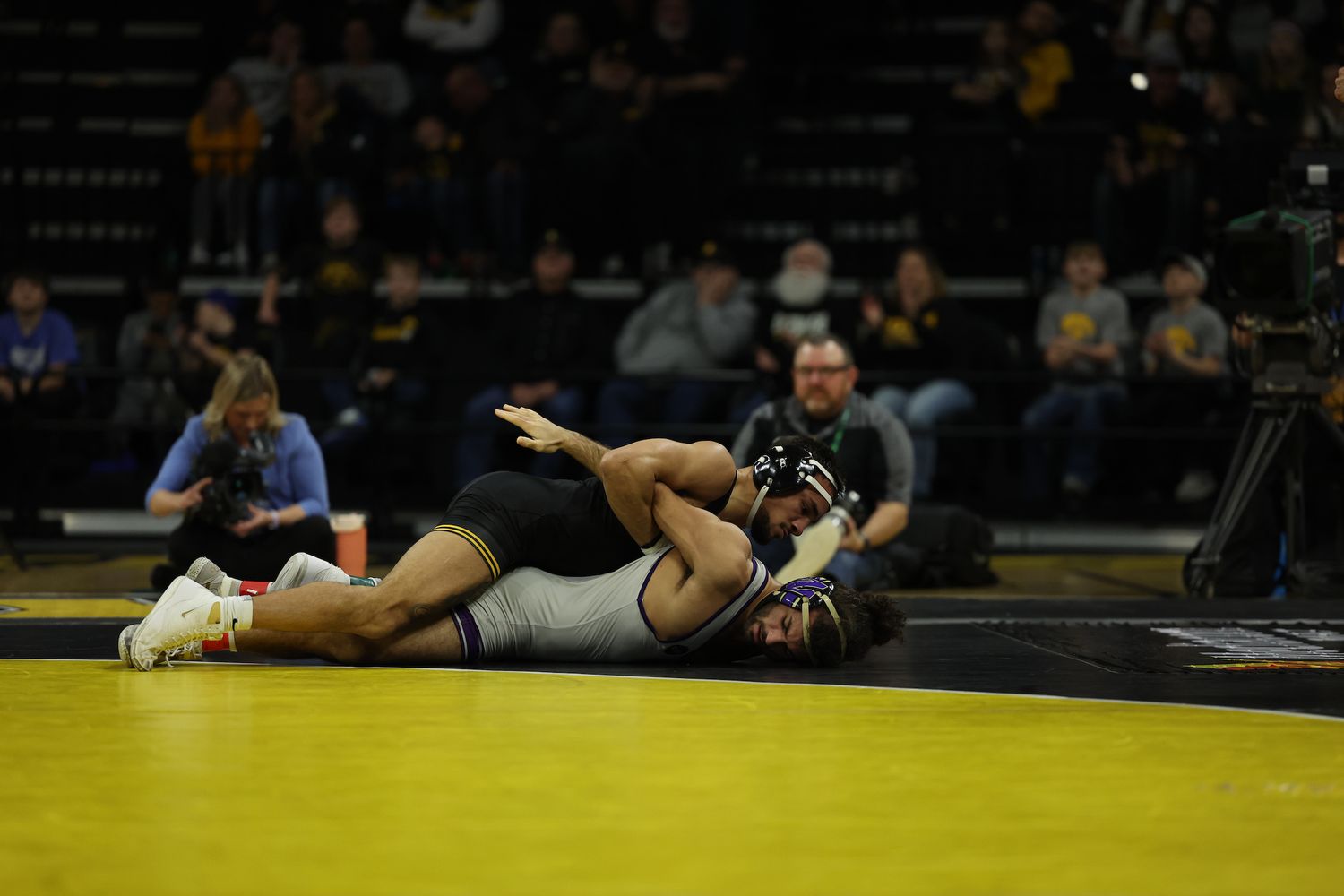 In the first top-five battle of the evening, No. 5 Yahya Thomas used a third-period takedown to down No. 4 Max Murin, 3-2, at 149. It was Murin’s first loss to Thomas in three matches.

The Hawkeyes followed with four straight wins to build an 18-6 lead.

No. 16 Cobe Siebrecht notched his third ranked win of the season, downing No. 9 Trevor Chumbley, 6-3 at 157. Siebrecht had takedowns in the first and third periods and had exactly one minute of riding time to improve to 7-1 this season.

“I was moving my feet, moving my hands,” said Siebrecht. “I felt my hand fighting and moving my feet was better this match. I could feel him fading and when I got an opportunity to get in on a shot, I put him down hard.”

No. 7 Patrick Kennedy followed with a 4-2 decision at 165 as a first-period takedown stood up in a win over No. 19 Maxx Mayfield. No. 15 Nelson Brands made it three straight wins with an 8-2 victory over Ankhaa Enkhmandakh at 174. Brands had a takedown in the first and two in the third to notch his fourth win of the season.

Iowa got its third bonus point victory at 184 when No. 8 Abe Assad earned a major decision over Evan Bates, winning 10-2. Assad had a first period takedown, led 6-0 through two and got two takedowns in the third to secure the major. It was his seventh bonus point win this season.

No. 3 Tony Cassioppi got a third-period takedown with 1:09 left to take a 3-1 lead over No. 4 Lucas Davison. Cassioppi held off a late scramble to improve to 14-0 on the season.

OF NOTE…
– This is the second time in Lee’s career that he has pinned four consecutive opponents (first four matches of 2020-21 season).
– Assad has won eight consecutive matches, the second-longest winning streak of his career.
– Cassioppi’s win was his 40th career victory over a ranked opponent.
– The win was Iowa’s 75th all-time over Northwestern and the 15th straight in the series.

UP NEXT
The Hawkeyes return to action Friday, hosting Nebraska at 8 p.m. (CT) inside Carver-Hawkeye Arena.