MADISON, Wis. – No. 3 Tony Cassioppi’s 4-1 decision over No. 11 Trent Hillger tied the dual at 18 and the second-ranked University of Iowa wrestling team defeated No. 16 Wisconsin, 19-18 via criteria, on Sunday afternoon in front of a record crowd at UW Field House.

The Hawkeyes and Badgers split the 10 matches, but Iowa won the dual on the third criteria, which is points scored in decisions, majors and technical falls. Iowa had a 31-24 advantage to propel its record to 12-0 overall and 5-0 in the Big Ten.

“It was criteria, good for them,” said Iowa head coach Tom Brands. “We’ve had a of 5-5 (results)  in duals – Penn, Iowa State, Wisconsin and Illinois.  We have a heavyweight that has ice water in his veins.

With the Hawkeyes trailing 18-15 in the team total, Cassioppi and Hillger traded escapes in the first and second periods before Cassioppi grabbed a 3-1 lead with a takedown 20 seconds into the third to grab control.

“I hit a sweep single to the left leg, he went over the top and popped through,” said Cassioppi. “I hid my ankles and got the takedown.”

It was the third time this season Cassioppi took the mat with the dual result in the balance (Iowa State, Illinois and Wisconsin).

“It doesn’t change anything for me, I have to go out and do my job,” said Cassioppi. “The big thing is I want my teammates to win, and I want what’s best for them. That’s what is on my mind. That’s the biggest thing that’s on my mind there.” 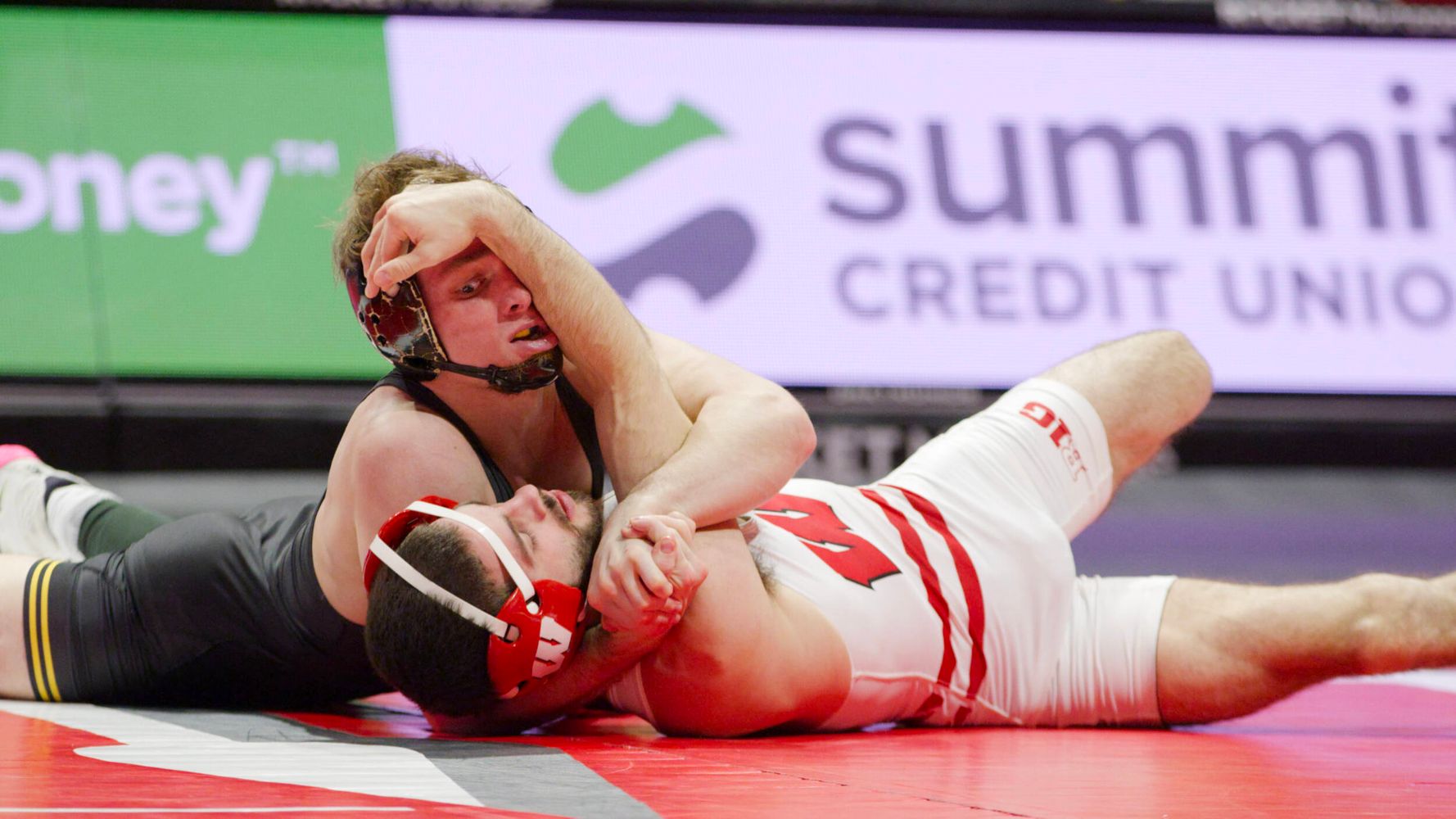 The Hawkeyes won the first three matches and four of the first five before intermission to grab a 15-3 lead.

Top-ranked Spencer Lee opened the dual with his sixth consecutive fall – a new career long streak — pinning No. 6 Eric Barnett in 4:38. It was Lee’s 48th consecutive win dating back to the 2018-19 season.

Over his last four matches, the Pennsylvania native has pinned the No. 9, No. 3, No. 7 and No. 6 wrestlers, giving him seven falls this season.

Lee got an early takedown and had three near falls to take a 10-1 lead into the second period. He led Barnett, 16-3, before settling in for the fall in the second period. It was the first time since the Soldier Salute in December that Lee has wrestled beyond the first period.

Junior Brody Teske followed with a 4-0 decision over No. 28 Taylor LaMont at 133, giving Iowa a 9-0 lead. Teske had a second-period takedown, got an escape point in the second and rode out LaMont in the third period. He had 1:57 of riding time to improve to 4-0 this season.

The Badgers got on the board at 149, winning a top-10 battle between No. 7 Max Murin and No. 2 Austin Gomez. The match was tied 2-2 heading to the third before Gomez used an escape and takedown to win the match.

No. 21 Cobe Siebrecht gave the Hawkeyes a 15-3 lead with a 3-2 decision over No. 18 Garrett Model at 165. After trading escapes in the first two periods, Siebrecht used a clutch takedown with 15 seconds remaining to notch his fourth win over a ranked foe this season and eighth win overall.

After intermission, the Badgers won four consecutive matches to take an 18-15 lead.

In the second top 10 battle of the dual at 165, No. 6 Dean Hamiti used a third-period reversal and takedown to win a 4-3 decision over No. 10 Patrick Kennedy. The loss snapped Kennedy’s eight-match winning streak.

Wisconsin’s Josh Otto followed with a 6-5 decision over freshman Drake Rhodes at 174. Rhodes led 4-3 heading to the third period before Otto tied the match with an escape and got the winning takedown with 35 seconds left. The match was Rhodes’ second in the varsity dual lineup this season.

OF NOTE…
– The Hawkeyes had two true freshman – Drake Rhodes (174) and Kolby Franklin (197) – in the starting dual lineup. It is the first time in the Brands era that two freshmen have been in the lineup.
– Franklin is the fifth freshman to be in the varsity dual lineup this season.
– The dual attendance was the largest in Wisconsin wrestling history.

Iowa wins on the third criteria with a 31-24 advantage in match points in non-fall matches.

UP NEXT
The Hawkeyes return to action Friday, traveling to University Park, Pennsylvania, to face No. 1 Penn State. The dual will begin at 7:30 p.m. (CT) and be televised live on BTN.