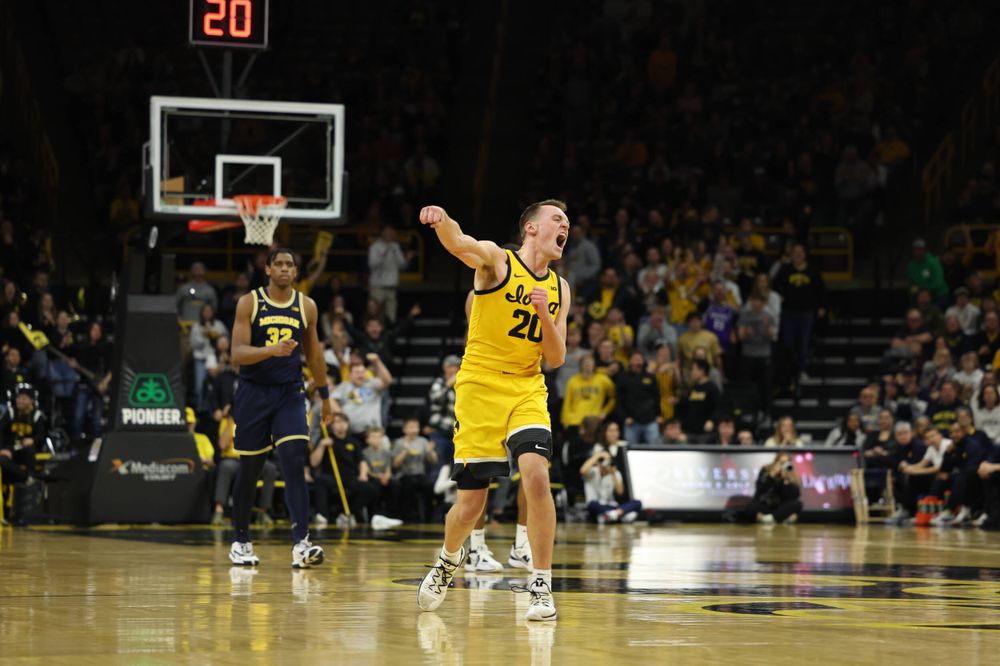 TV: Thursday’s contest will be televised nationally on FS1. Gus Johnson and Jim Jackson will call the action.

Ohio State snapped Iowa’s four-game win streak and beat the Hawkeyes for the first time in Value City Arena since 2019 with a 93-77 win Saturday afternoon in Columbus.

Fifth-year senior Filip Rebraca has taken his game to another level this season. Rebraca is one of nine players nationally on a college men’s basketball roster over the age of 25. He ranks first on the squad in blocks (26) and field goal percentage (.577), and second in rebounds (8.4) and points per game (13.9). He is pulling down 3.05 offensive boards per outing, fourth best in the Big Ten and 45th nationally. His field goal percentage (.577) ranks 40th in the country.

Rebraca netted career point No. 1,500 against Eastern Illinois (Dec. 21). He has scored 472 points the last two seasons as a Hawkeye (55 games) and 1,129 points in three seasons at North Dakota. He grabbed career rebound No. 1,000 in Iowa’s win over Michigan.

The under-sized center (6-foot-9) has netted double figures a team-best 15 times this year and posted a team-best seven double-doubles, tying for second most in the league. Rebraca has scored in double figures in 12 of 13 games and netted 15+ points in six of Iowa’s last nine. He has rejected multiple shots six times this season and his 1.37 blocks per game ranks sixth in the conference.

Rebraca had another stellar outing versus Eastern Illinois. He tallied a game-best 24 points, collected a career-high five steals, and snagged eight rebounds. He totaled 16 points and grabbed a season-high 13 rebounds at Nebraska, and amassed 19 points and 10 rebounds in Iowa’s triumph over then-No. 15 Indiana. Rebraca posted double-double No. 7 in the overtime win over Michigan (13 points, 12 rebounds).

Over the last five games, Sandfort is averaging 15.4 points and 5.2 rebounds, shooting 54 percent (26-of-48) from the field and 50 percent (13-of-26) from long distance. He made a career-best four 3-pointers in two games: Rutgers (4-of-5) and Michigan (4-of-9). Sandfort has netted double figures in six of the last nine games, including four in a row. Iowa is 6-2 when Sandfort makes multiple triples in a game.

Sandfort was instrumental in Iowa’s overtime victory over the Wolverines on Jan. 12. He scored Iowa’s final seven points of regulation (63 seconds), including a four-point play with 20 seconds remaining to force overtime. Sandfort tallied 24 of his career-high 26 points in the second half and overtime.

Off the court, Sandfort excels in the classroom earning Fall Semester Dean’s List distinction in 2022.

Murray is averaging a team-best 21.3 points and 8.9 rebounds per outing. Murray has increased his scoring average by 12.6 points per game this season compared to last year. His 21.3 points per contest ranks 13th nationally. Murray did not play in four contests in December (Iowa State; Wisconsin; Southeast Missouri State; Eastern Illinois) due to a lower body injury.

Murray returned to the lineup on Dec. 29 at Nebraska, registering game bests in points (17) and blocks (3), while also clearing eight rebounds. He scored 22 of his game and career-best 32 points in the second half at Penn State on Jan. 1. Murray reached 30 points for a second straight game, totaling 30 points and 10 rebounds in Iowa’s victory over No. 15 Indiana on Jan. 5. He amassed 17 points and seven rebounds in Iowa’s road triumph at Rutgers. Murray played all 45 minutes in Iowa’s overtime triumph over Michigan, amassing 27 points, eight rebounds, three blocks, three assists, and a steal. He netted 17 of his 19 points in the second half in the victory over Maryland and netted a team-best 22 points on Sunday at Ohio State.