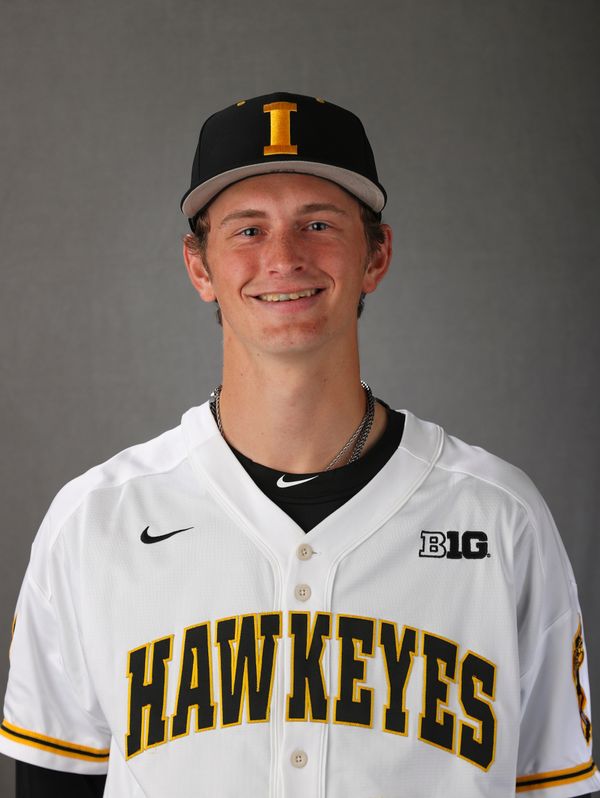 Hawk Item — Transfer starting pitcher from South Dakota State… went 3-9 with a 5.50 ERA over 16 starts in two seasons as the Jacks’ No. 1 starter… had 106 strikeouts over 88 1/3 innings… pitched for the Wareham Gateman in the Cape Cod League in the summer of 2021, where he was named to the Cape Cod All-League Team after going 3-0 with a 1.55 ERA in six starts with 34 strikeouts (to six walks) in 29 innings… surrendered just 18 hits.

2022 Honors — Collegiate Baseball Second-Team All-American… ABCA/Rawlings Third-Team All-American… ABCA/Rawlings First-Team All-Midwest Region honoree… Big Ten Pitcher of the Year (second straight Hawkeye to earn distinction)… first-team All-Big Ten selection… two-time Big Ten Pitcher of the Week (Feb. 23, March 2). 2022 — Made 12 Friday and three Saturday starts… first Hawkeye pitcher to earn consecutive Big Ten weekly accolades in consecutive weeks… went 7-3 with a 3.07 ERA in 15 starts… had 98 strikeouts to 30 walks over 93 2/3 innings… had nine quality starts and seven games with seven or more strikeouts… 98 strikeouts are third-most in a single season in school history… was eighth nationally in hits allowed per nine innings (5.77) and 14th in WHIP (0.96)… went 5-1 with a 2.59 ERA in eight Big Ten starts with 52 strikeouts to 11 walks… led the Big Ten in batting average against (.178), second in innings (93.2), third in strikeouts (98), fourth in ERA (3.08), tied for fourth in wins (7), and tied for ninth in fewest hits allowed (60)… in league games was first in ERA (2.59), wins (5) and innings (55.2) and third in batting average against (.189), fourth in strikeouts (52), tied for fifth in fewest walks (11), tied for seventh in strikeouts looking (13) and tied for eighth in fewest runs (18)… notched seventh win, tossing seven shutout innings, scattering four hits and fanning seven in a road win at Michigan State (5/13)… tallied sixth win, scattering five hits and allowing two runs over 8 2/3 innings against Purdue (5/6)… pitched eight shutout innings before giving up two runs with two outs in the ninth… tossed a complete game shutout, Iowa’s first since 2016, in the 1-0, series-opening victory at Nebraska (4/29)… scattered two hits, fanned six and allowed two walks and threw just 102 pitches to tally his fifth win of the season… notched his fourth win, scattering six hits and allowing one run over eight innings at No. 8 Rutgers (4/22)… struck out 11 without issuing a walk for a second straight game… tallied his third win, allowing three runs (one earned) on six hits over a career-long eight innings against Minnesota (4/15)… struck out a season-high 11 without walking a batter… notched his second straight quality start, allowing one run on three hits over six innings and fanning nine against Illinois (4/9)… tallied a quality start, but suffered the loss after giving up two runs on three hits over seven innings at Michigan (4/2)… allowed one hit, but allowed three runs (two earned) and fanned five against Central Michigan (3/25)… had a no-hitter into the sixth against Wichita State (3/4) at the Frisco Classic… retired 15 straight Shockers at one point before getting a no-decision… logged a career-best 7 2/3 innings, scattering three hits and striking out nine in a victory over Pepperdine (2/25)… named the Big Ten Pitcher of the Week on Feb. 23… notched his first win as a Hawkeye, tossing six innings of one hit, one run ball against Air Force (2/18)… after giving up a first inning home run, retired the final 16 batters he faced… named to the Big Ten Preseason Honors List… rated as the No. 89 player on MLB.com’s top 100 draft prospects… ranked as the No. 155 overall and No. 2 player in the Big Ten by Perfect Game for the 2022 Draft… ranked as the No. 2 player in the Big Ten and the No. 61 player nationally for the 2022 MLB Draft by D1Baseball.com… also named the 80th-best starting pitcher in collegiate baseball by D1Baseball.com.

at South Dakota State (2021) — Went 2-7 with a 5.43 ERA in 12 starts as the Friday night starter… struck out 88 batters (to 31 walks) over 68 innings… had five games with seven or more strikeouts and three with 10 or more strikeouts… went six or more innings in five starts… scattered three hits over six shutout innings and struck out a career-high 12 batters in a win at Northern Colorado (2/26)… notched second win, allowing three runs (two earned) on three hits over seven innings at Western Illinois (3/26)… had back-to-back tough-luck losses against Omaha (4/10) and North Dakota State (4/23)… allowed two runs over seven innings and fanned 11 against Omaha and gave up three runs and struck out 11 against the Bison.

at South Dakota State (2020) — Was the Jackrabbits’ No. 1 weekend starter throughout abbreviated season… shared team lead with four starts… went 1-2 with a 5.75 ERA… ranked second on team with 18 strikeouts and tied for second on squad with 20 1/3 innings pitched… in first career start, in season opener at Dallas Baptist, struck out five in 4 1/3 innings (2/14)… earned first collegiate victory after not allowing an earned run in five innings at Pacific (2/21)… fanned nine batters and walked only one in giving up one run in seven strong innings at UT Rio Grande Valley (2/28).

High School — Was a finalist for the Minnesota Mr. Baseball Award as a prep senior at Woodbury High School… all-state selection as a senior… two-time all-conference and all-section honoree… made 13 pitching appearances and compiled an 8-2 record with a pair of shutouts and two saves… other totals included 112 strikeouts and only 12 walks in 72 1/3 innings and a 0.58 ERA… 112 strikeouts were a school record… notched 10 or more strikeouts in seven of his starts, including a 16-strikeout performance against North St. Paul in the second playoffs opener… when not pitching, played shortstop and batted .377 with a home run, five doubles and 40 RBIs… his 75 strikeouts in 2018 were the third most in the state of Minnesota… helped team to two conference titles and two state appearances, finishing third and fourth… also was a four-year basketball and two-year football letterwinner… high school coach was Kevin McDermott.