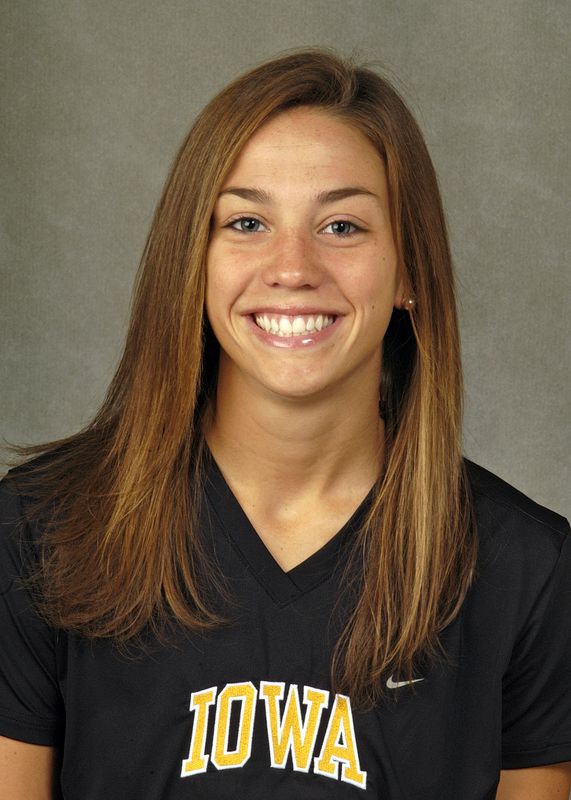 2008 as a Senior… Played all 23 games, including 21 starts… ranks second on the team in points (36), goals (15) and shots (49)… tallied three game-winning goals (#1 North Carolina, Northwestern and Missouri State)… started in Iowa’s national semifinal game against Maryland… the three game-winning goals tie for second-best in the league… ranked fourth in the Big Ten in points (36) and goals (15)… scored on 30.6% of her shots on goal… also had six assists… helped lead Iowa to a its third-straight Big Ten Tournament title with a goal and an assist vs. Indiana in the first round and a goal vs. #10 Michigan State in the semifinals… helped lead Iowa to back-to-back NCAA Regional victories over #13 Louisville and #10 Michigan State… recorded a hat trick with three goals vs. Pacific… scored two goals vs. #1 North Carolina and Missouri State… scored multiple points in nine contests… named Big Ten Player of the Week for her efforts in Iowa’s 3-2 win vs. #1 North Carolina and 3-2 loss to #3 Wake Forest.

2007 as a Junior… Letterwinner… started 20 of 21 games… recorded two goals against Indiana during the Big Ten Tournament… finished season with 12 points on five goals and two assists.

2006 as a Sophomore… Second team NFHCA West Regional pick and all-Big Ten second team selection… started all 21 games for the Hawkeyes… earned Big Ten Player of the Week after recording one goal and two assists in a 5-1 win over Kent State (Sept. 1) along with two goals in a 3-2 overtime loss against No. 3 Duke (Sept. 3)… scored the game-winning goal against Stanford (Sept. 13)… recorded both Iowa goals in a 2-1 double-overtime time victory over Michigan State (Oct. 14)… scored one goal in the Big Ten Tournament semifinal victory over Ohio State, 2-1… tied for the team lead in goals (10) and points (22). .