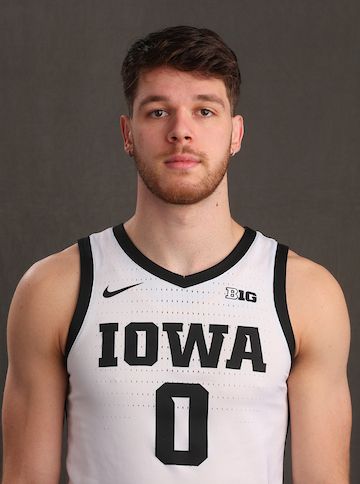 2021-22 Honors — Co-winner of the team’s Newcomer of the Year Award. 2021-22 — Started all 36 contests at center… ranked second on the team in rebounds (5.6), third in blocks (0.7) and sixth in scoring (5.8)… netted double figures in five games… shot the basketball at a 53 percent clip from the field (86-of-161)… tallied a season-best 13 points in win at Maryland… rejected a season-best two shots in seven games… grabbed double-digit rebounds in three contests, including back-to-back road games (Minnesota; Rutgers)… registered one double-double, totaling 12 points and 12 rebounds in road victory at Minnesota… made one 3-pointer (Alabama State)… letterwinner.

2020-21 Honors – Second-Team All-Summit League honoree… Academic All-District First Team. 2020-21 — Started all 26 contests… led the team in scoring (16.8), rebounding (7.8), and field goal percentage (.506, 174-344)… posted season bests in 3-pointers made (15) and 3-point percentage (36.6 percent)… led the squad in scoring 14 times, rebounding 17 times, and blocks 11 times… became the 39th player in program history to surpass 1,000 points and the 25th player to have 1,000 points and 500 rebounds on Jan. 30, 2021… grabbed a team-best seven rebounds and scored 15 points at Miami… reached 15 points once again at Dixie State… scored a game-high 23 points on 10-of-19 shooting at Minnesota… netted a career-high 26 points on 10-of-15 shooting and grabbed six rebounds against South Dakota… led the team with 18 points vs. South Dakota State… led the team with 21 points and seven rebounds vs. North Dakota State… hit 5-of-6 shots for 12 points at SIU… scored 16 points and grabbed five rebounds vs. Kansas City… tallied 14 points and grabbed eight rebounds against Kansas City… scored a game-high 24 points on 11-of-20 shooting, added nine rebounds and two blocks at Oral Roberts… recorded his first double-double of the season with 14 points and 10 rebounds vs. NDSU… registered his fifth 20+ point outing with 21, seven rebounds, three assists and three steals vs. NDSU… scored 14 points at SDSU… had 15 points and eight rebounds at SDSU… recorded his second double-double of the season and sixth game with at least 20 points with 25 points and 14 rebounds vs. WIU… eclipsed the 1,000-point mark for his career with 24 points and six rebounds vs. WIU (Jan. 30)… had 16 points and six rebounds at Denver… tallied his third double-double of the season with 13 points and 11 rebounds vs. South Dakota… netted 17 points in win over South Dakota… tallied back-to-back double-doubles, including scoring 22 points on Feb. 19, to close regular season at Omaha.

2019-20 Honors — All-Summit League Honorable Mention Team. 2019-20 — started all 32 games… led the team and the league with 13 double-doubles… reached double figures 27 times… second on the team with 14.3 points per game and led the squad with 8.9 rebounds per game… his 13 double-doubles are the most by a UND player in a single season during the program’s Division I era and his 15 career double-doubles rank him second for the most since 2008… finished second in the Summit League in shooting percentage and third in rebounds per game… reached 20 points for the first time in his career in the season-opening win vs. Crown College… tallied a double-double against No. 8/7 Gonzaga… scored a career-high 24 points, added 10 rebounds, and rejected eight shots against Milwaukee… the eight blocks are the most in a game since at least 2008, when UND moved to Division I, and was just two shy of the program record set by Dan Clausen, who had 10 against Augustana on Jan. 23, 1982… recorded double-doubles in road games against Nebraska and Oregon State… became the first player in UND’s Division I history (2008-present) to tally a double-double in four straight games in conference wins over Denver and Purdue Fort Wayne… scored back-to-back 20-point outings for the first time his career against South Dakota State and North Dakota State… matched his career-high 24 points on a personal-best 10 made field goals while grabbing 13 rebounds for his third straight 20+ point outing at Omaha… netted 14 points and grabbed 10 rebounds in UND’s semifinal win over Purdue Fort Wayne.

Before UND — Spent this past season at Williston Northampton School in Easthampton, Massachusetts, where he was named the Dale Lash Team MVP (Easthampton) and earned Class A All-NEPSAC accolades.