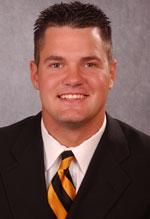 College – Played one season at Lamar Community College… hit .380 with 10 HR and had 35 stolen bases.

High School – Wyoming Male Athlete of the Year in 2001…two-time all-State selection… team MVP and Gatorade Player of the Year as a senior… three-time all-Conference and all-District selection… four-year varsity letterwinner… named Outstanding Newcomer is a freshman… holds school records for HR, stolen bases and doubles… batted .510 with 16 HR and 30 SB as a senior in leading his team to a 40-12 overall record and a runner-up finish at the State Tournament.