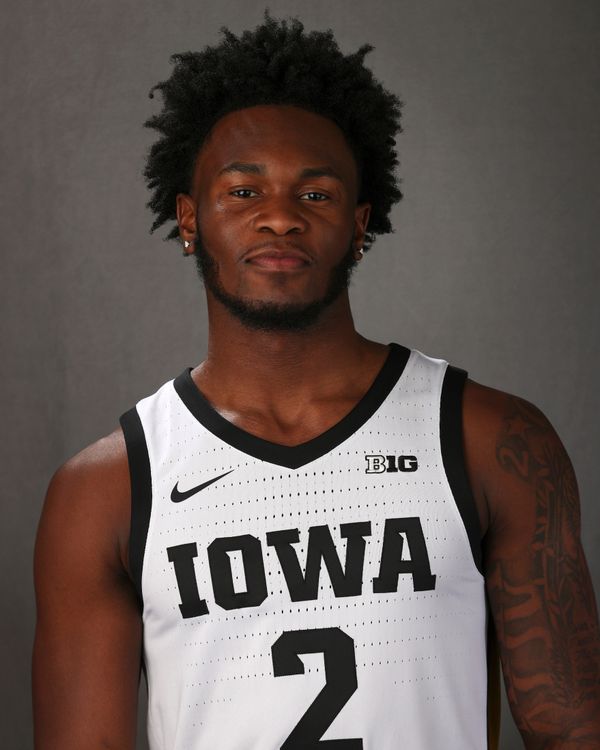 Hawk Items — Enters his senior season having scored in double figures 11 times… changed uniform number from No. 1 to No. 2 prior to junior season.

2021-22 — Competed in all 36 contests, including starting the first 21 games… ranked first on the team in assists (3.2) and steals (1.4) and eighth in scoring (4.3)… his 2.33 assist-to-turnover ratio ranked sixth in the league and 36th in the country… reached double figures twice (Alabama State; Virginia)… posted first career double-double (11 points, 11 assists) in win over Alabama State… credited with a single-season best 114 assists, which ranks 10th in Iowa history for a junior… his 51 steals ranked second in the conference and are the seventh most by a Hawkeye junior… dished out 4+ assists in 16 contests… missed only five free throws (26-of-31, .839)… credited with multiple steals in 15 games, including a season-high four in three contests… scored 10 points at Virginia, including a game-winning pull-up jumper with eight seconds remaining to lift Iowa to victory… totaled nine points and nine assists in home victory over Maryland… collected four points and a game-best four steals against #9 Purdue in the Big Ten Tournament championship game… letterwinner.

2020-21 — Competed in all 31 contests… ranked third on the team in steals (24)… scored in double figures twice… led team in steals six times and assists three times… credited with multiple assists in seven straight games to conclude the season, including four against Oregon in the NCAA Tournament Second Round… totaled a game-best three steals to go along with four points, four rebounds, and four assists in win over Nebraska… tied a season best with a game-high seven assists in road win at #4 Ohio State… provided a spark off the bench in home win over Michigan State, totaling 10 points and a game-best six assists… totaled seven points, one steal, and an assist in the final 1:46 against Indiana… snagged a season-high five rebounds, while also totaling five points, three assists, and a steal in win at Northwestern… recorded game and career-high six steals at Maryland… did not play second half of Northwestern game on Dec. 29 (sprained ankle) and only one minute of the second half of the Rutgers game (poked in the eye) on Jan. 2… scored 12 of his season-high 14 points in the first half against #1 Gonzaga… dished out a season-best seven assists against Iowa State with zero turnovers… letterwinner.

2019-20 — Competed in all 31 contests, starting the last 20… averaged 6.5 points, 2.9 assists, 2.0 rebounds, and a team-best 1.2 steals… made 83 percent (54-of-65) from the free throw line… scored in double figures seven times, led team in assists nine times and steals eight times… started first career game in win over Cincinnati… made 17 straight free throws (Jan. 27-March 8)… netted 14 points at #23 Illinois… scored 13 points, bolstered by sinking all nine free throw attempts, against San Diego State… dished out a personal-best eight assists in home win over #16 Penn State… tied for seventh in the Big Ten in steals per game (1.2)… his 2.9 assists per game tied for the 16th most in the conference and the second most by Big Ten freshmen… named Big Ten Freshman of the Week (Jan. 6) after recording personal-best 18 points against #21 Penn State behind a 16-point outburst in the second half… posted personal bests in assists (7) and steals (5) in second career start against Kennesaw State; marking the 11th time a player in the Coach McCaffery era recorded at least five steals… snagged a personal-best eight rebounds in win over Cal Poly… season canceled by Big Ten Conference and NCAA on March 12 due to concerns of coronavirus (COVID-19)… letterwinner.

High School — Finalist for 2019 Mr. Basketball in the state of New York… Cardinal Hayes HS all-time leading scorer… averaged 22.5 points, 5.3 assists, 4.7 rebounds, and 1.7 steals helping lead Cardinal Hayes High School to a 21-8 record and a berth in the 2018 Catholic High School Athletic Association (CHSAA) semifinals… helped lead Cardinal Hayes HS to its first CHSAA city championship on the “AA” level since 1990 in 2017, earning MVP honors as a sophomore… enters his senior year with 1,059 points, 279 assists, 202 rebounds, 112 steals… No. 5 ranked player in the state of New York, according to 247Sports… played with the PSA Cardinals on the Nike EYBL circuit, averaging 5.7 points and 4.2 assists per game helping lead the team to a berth at the 2018 Nike Peach Jam… averaged 5.4 points, 3.4 assists, and three rebounds in five games at the Nike Peach Jam… selected to participate in the Pangos All-American Camp and the NBPA Top 100 Camp along with Iowa classmate Patrick McCaffery… competed on PSA Cardinals AAU team.