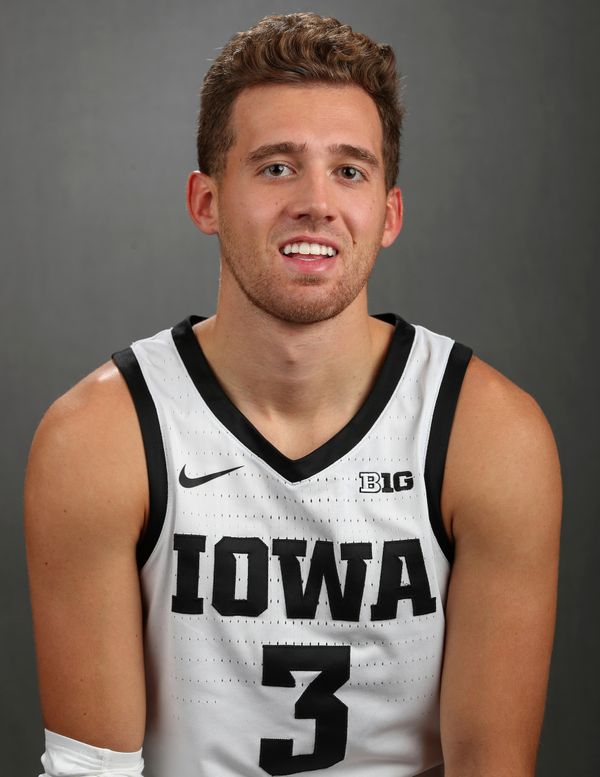 Hawk Items — School record holder in career 3-pointers made (455), games played (179), assists (709), and free throw percentage (.887, 370-417)… the NCAA all-time leader in career games played (179)… ranks fourth in NCAA history with 455 career 3-pointers… the 455 triples are the second most by a player from a major conference (457 by Duke’s J.J. Reddick)… ranks third in career scoring at Iowa (2,033) and sixth in field goals made (604)… only Division I player over to make 75+ 3-pointers in five seasons… only Division I player to amass more than 700 assists and 450 3-pointers… reached double figures in scoring 100 times, including reaching 20 points in 23 games… dished out 5+ assists 70 times in his career… made four or more 3-pointers 47 times in his career… averaged double figures in scoring all five full seasons played… one of only three Hawkeyes with four 100-assist seasons (Dean Oliver, Jeff Horner)… only Hawkeye in program history to total 2,000+ points and 700+ assists… seven career points-assists double-doubles, most in school history… eight career games with 10 or more assists is the most in school history… broke Iowa’s 3-point field goals made record in three years and amassed 193 more triples than any other Hawkeye in program history… led Big Ten in free throw percentage his sophomore and junior seasons, missing only seven free throws in 20 league games as a junior (64-of-71, .901) and two as a sophomore (37-of-39, .949)… one of only four Big Ten players to lead the conference in free throw accuracy in consecutive seasons… one of four Hawkeyes to earn the prestigious Chris Street Award multiple times (2018, 2021)… earned the team’s Top Playmaker Award five times… his 79 three-pointers in 2018-19 are third most by an Iowa junior in program history… 10th player in all of Division I basketball since 1992, to post at least 79 triples and 118 assists per season in each of his first three seasons… free throw percentage of 87.2 percent and 118 assists rank third and ninth best, respectively, by an Iowa junior… only player nationally to post 150+ assists and 80+ 3-pointers as a freshman and sophomore over the last 25 years… one of three players from a major conference over the last 20 years with 300+ assists and 150+ 3-pointers through their sophomore season… his 96 3-pointers and 178 assists were second most in program history by a sophomore… his 90.4 free throw percentage ranks first in program history by a sophomore… scored the most points in his family, outscoring brothers Matt, Jason, and Zach… averaged six points, 3.3 assists, two rebounds, and 1.3 steals in three games played during Iowa’s European Tour in August, 2018.

2021-22 Honors — Honorable Mention All-Big Ten by vote of league coaches and media… voted to the All-Big Ten Tournament Team… won Men’s and Battle of the Champions 3-Point contests in New Orleans, site of the Final Four… co-winner of the team’s Top Playmaker Award and Kenny Arnold Hawkeye Spirit Award. 2021-22 — Sank a school and Xfinity Center record 10 3-pointers at Maryland on Feb. 10… the 10 triples were one shy of tying the Big Ten record… made 91 3-pointers, second most among Big Ten players… in four games at the Big Ten Tournament, he averaged 13 points, shooting 45.5 percent from the field, 43.3 percent from 3-point range and 90 percent from the foul line… made game-winning 3-point basket with 1.1 seconds left in the semifinal win over Indiana… ranked second in team scoring (11.0), first in free throw accuracy (.889, 80-of-90) and fourth in assists per game (1.8)… made four or more 3-pointers in nine contests… posted career highs in points (30), 3-pointers (10), field goals made (10) in double-digit win at Maryland… missed only 10 free-throw attempts (80-of-90, .889)… went 7-of-8 from the free throw line twice (Rutgers; Nebraska)… led team with 20 points, bolstered by sinking six 3-pointers, in ACC Challenge road win at Virginia… letterwinner.

2019-20 — Played in 10 games, starting six contests prior to season-ending hip surgery on Dec. 19… averaged 8.8 points, 3.3 assists, and 1.6 rebounds… reached double figures in scoring four times… made all 18 free throw attempts, and has made 24 straight free throws dating back to 2019… dished out 10 assists (zero turnovers) in win over Minnesota… recorded his seventh career game with 10 or more assists in win over Minnesota… drained five of his last eight 3-point attempts in win at Syracuse after starting 0-for-6 to set a season high in threes… netted a season and team-best 20 points (4-9 3FG, 8-8 FT) in his first start of the year in win over #12 Texas Tech… letterwinner.

2018-19 Honors — Third-team All-Big Ten selection by the coaches and honorable mention by the media… earned the team’s Top Playmaker Award. 2018-19 – Started all 35 contests… netted 85 points over the final two minutes of regulation and two minutes of overtime to rank among the nation’s best… led the team in assists (3.4) ranked third on the team in scoring (11.6)… netted double figures 20 times… made three of more 3-pointers a team-best 15 times… led team in assists a team-best 16 times… ranked second the Big Ten and 23rd nationally in free throw accuracy (.872, 102-of-117)… made a season-best 24 straight free throw attempts (Feb. 19-March 15)… ranked fourth in the Big Ten with a team-leading 79 3-pointers made, and seventh in assist-to-turnover-ratio (2.0) and assists (3.4)… scored Iowa’s last 11 points in the final 90 seconds in road win over Indiana to tie a season-high 25 points… reached double-figures in both NCAA Tournament games, including a team-high 18 points against #6 Tennessee… completed Iowa’s comeback home win over Northwestern by nailing a game-winning 3-pointer with 0.6 left on the clock after scoring all of his 15 points in the final 5:28… netted 17 points, all in the second half with three triples in overtime, to lead Iowa’s overtime comeback home victory over Indiana… letterwinner.

2017-18 Honors — Honorable mention All-Big Ten selection by the media… earned the team’s Chris Street and Top Playmaker awards. 2017-18 – Started all 33 contests… made 34 straight free throw attempts (Jan. 4-Feb. 25) to share Iowa’s consecutive record with Chris Street (1993)… became sixth Hawkeye in program history to total more than 400 points and 150 assists in a season… ranked first on the team in assists (178) and 3-point shooting (96-of-223, .430), and second in scoring (13.5) and steals (22)… scored in double figures 23 times, including netting 20 points or more a team-best eight times… made all 10 FT attempts and drained five triples, scoring a game-high 29 points, in an overtime win at Illinois… one of six players nationally, and only player from a major conference, to make five or more 3-pointers in five straight true road games (Iowa State, Maryland, Illinois, Rutgers, Nebraska) over the last 20 years… credited with seven or more assists 10 times, including a season-best 11 versus Wisconsin… scored a career-best 30 points, bolstered by 6-of-8 shooting from 3-point range, in win over UAB… letterwinner.

2016-17 Honors — All-Big Ten Freshman Team honoree… earned the team’s Top Playmaker and co-Newcomer of the Year awards… Big Ten Freshman of the Week (Feb. 6 and March 5). 2016-17 — Competed in all 34 games, starting the last 28 at point guard… one of only two freshmen nationally the last 25 years to register 175+ assists and 85+ 3-pointers… notched double-doubles in last three games of the season (Indiana; South Dakota; TCU)… first Hawkeye in history to post three consecutive double-doubles in points and assists… posted career bests in points (25) and assists (13) in NIT Second Round versus TCU… the 13 assists against the Horned Frogs tied for the fourth most in a single game in Iowa history… Iowa’s freshman single-season 3-pt field goals record holder (89), shattering Matt Gatens’ 52 set in 2009… his 175 assists are most by a Hawkeye freshman in a single-season, besting Jeff Horner’s 140 in 2003… ranked first on the team in assists (175) and 3-pointers (89), and third in scoring (10.9) and steals (29)… made eight 3-pointers on 8-of-10 shooting from 3-point range in win at #24 Maryland (Feb. 25); the eight triples are the most by a freshman in a single game in Iowa history and one shy of the school record… tied Iowa Big Ten Tournament records in assists (10) and 3-pointers made (6) versus Indiana… his 372 points and 41.6 percentage from 3-pont range rank sixth and second best, respectively, in Iowa freshman single-season annals… shot 29-of-52 (.558) from 3-point territory over a span of the last six games… scored a then-personal best in scoring (23), 3-pointers (7), and assists (7) in first career start at Notre Dame… went 7-of-15 from long distance at Notre Dame; the 15 attempts ties for second most in a game in Iowa history… led team in assists a team-best 23 times… netted double digits 17 times, including reaching 20 points five times… shot 85.5 percent (47-of-55) from the free throw line… letterwinner.

High School — 2016 Iowa Mr. Basketball and Iowa Gatorade Player of the Year playing for Linn-Mar High School… garnered first-team all-state and first-team all-league after averaging 25.8 points and 5.2 rebounds as a senior… shot at a 92 percent clip from the free throw line and 43 percent from 3-point range as a senior… led all of Iowa Class 4A with 593 points his senior season… holds Linn-Mar school record for career 3-pointers made, and career and single-season free throw percentage… led Linn-Mar to the Iowa Class 4A sub-state final… third all-time leading scorer at Linn-Mar and Metro… led team in team in scoring (17.7), assists (4.5), rebounds (4.5), and tied for steals while being named first team All-Metro and All-Conference, second team All-State, Metro Player of the Year as a junior… four-year starter on the basketball team and competed four years on varsity golf team… four-time basketball team captain… averaged 16 points and six rebounds on the 2015 AAU National, State, and Elite 28 Premier League Champion Martin Brother’s squad… Academic All-Conference as a senior on the golf team.