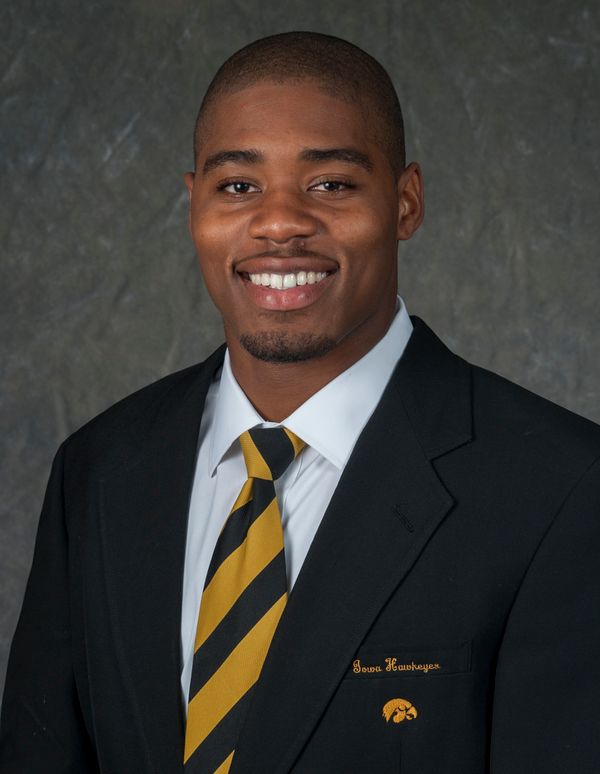 Hawk Items — His 136 games played tie as the second most in program history… averaged 12.6 points in five games during Iowa[apos]s 2013 summer European trip… his 148 career blocks and 1,119 points rank fourth and 30th, respectively, in school history… scored in double figures 49 career times… posted 15 career double-doubles… career 53 percent shooter from the field… one of only four Hawkeyes to lead the team in blocks three-straight seasons… five blocks against Northwestern on March 14, 2013, tied the school record for most in a Big Ten Tournament game… became the first Big Ten player in over 15 years to post at least 20 points, 10 rebounds and 5 blocks in a game when he was credited with 22 points, 13 rebounds and 6 blocks vs. #2 Ohio State on Jan. 4, 2011… only Hawkeye freshmen to ever amass over 340 points, 200 rebounds and 40 blocks and first Iowa player to accomplish the feat since Ryan Bowen totaled 447 points, 271 rebounds and 41 blocks as a senior in 1997-98… his 210 rebounds in 2011 are the most ever for an Iowa rookie, while his 41 blocks and 57 percent field goal percentage both rank third best… invited to the USA Basketball U19 Training Camp in the summer of 2011.

2013-14 — Played in 32 games, starting 31… became 42nd player in Iowa history to record 1,000 career points when he surpassed 1,000-point threshold vs. Northwestern (Jan. 9)… his 26 blocks tie for the ninth most by an Iowa senior… played just one minute vs. Wisconsin (Feb. 22) and did not play at Minnesota (Feb. 25) due to illness… posted three double-doubles… made first career 3-pointer in his 132nd game at Michigan State (March 6)… ranked second on team and 16th in Big Ten rebounding (5.7)… ranked fifth in team scoring (7.2)… sank 14 of his last 17 free throw attempts (.824)… scored a season-high 12 points vs. Maryland Eastern Shore… netted 10 points in win over UTEP… collected a career-high three steals vs. Villanova… scored a team-high 15 points, while also snagging eight rebounds in win over Drake… posted first double-double of the season in win over FDU (12 points and 11 rebounds)… grabbed a game-high nine boards at #4 Wisconsin… recorded his second double-double of the year in home win over Northwestern, scoring 16 points to go along with 10 rebounds… posted his second straight double-double (11 points and 10 rebounds) in road win at #3 Ohio State… grabbed a team-high seven rebounds in home win over Minnesota… netted a season-high 17 points, 15 in the first half, and grabbed six boards at #21 Michigan… led team in rebounding (10), scored eight points and matched a season high with two assists in home win over #10 Michigan… led team in rebounding (8), scoring (16) and blocked shots (4) in road win at Penn State; it marked only the second time a Hawkeye posted 16+ points, 8+ rebounds and 4+ blocks in a game since 1996-97… tallied 14 points on 7-of-11 shooting at Indiana… letterwinner.

2012-13 — Played in 38 games, starting 18… averaged 7.3 rebounds the last eight contests … started his first game of the season vs. Penn State (Jan. 31), posting his first double-double of the year (10 points and 10 rebounds)… team[apos]s fourth leading scorer, averaging 6.8 points per outing… led the team in blocks 13 times and rebounding in nine games… registered three double-doubles (Penn State, Nebraska and Northwestern)… ranked ninth in the Big Ten in blocks (1.2)… shot at a 48 percent clip from the field, including 54 percent in league play… grabbed 10 or more boards five times and 16 times in his career… saw limited action in Iowa games against Coppin State and Indiana due to injury… ranked first on the team in blocks (45) and second in rebounding (5.1)… blocked five shots in B1G tourney vs. Northwestern and four twice (Central Michigan, Penn State and Western Kentucky)… grabbed a game-high 10 rebounds to go along with nine points in opening win vs. UTPA… scored a game-high 17 points against A&M-CC off 5-of-6 shooting from the floor and 7-of-8 shooting from the charity stripe… netted 14 points on 5-5 shooting from the field and 4-5 from the foul line vs. #18 Michigan State… tallied 11 points on 5-of-6 shooting from the field and 1-1 from the foul line in win at Northwestern… pulled down a game-high 10 boards at #14 Ohio State… led team with eight rebounds and three blocks to go along with 12 points at Purdue… rejected a game-high three shots in home win over Northwestern… four blocks and tied season high with two steals to go along with 11 points in win at Penn State… collected his second double-double of the season (11 points, 13 rebounds) in a home victory over Nebraska… third double-double of year in B1G tourney vs. Northwestern with 10 points, 12 rebounds and season-best five blocks… posted nine points and eight rebounds in NIT win over Indiana State… had eight points and six rebounds in NIT victory over Stony Brook… letterwinner.

2011-12 — Played in all 35 games, including 21 starts… blocked the most shots on the team (36), shot at the best percentage (.524, 109-of-208), ranked second in rebounding (4.8) and fourth in scoring (8.2)… scored in double figures 13 times… notched three double-doubles (NC A&T, Brown and Boise State)… blocked 15 shots the last seven games (2.1 avg.)… ranked seventh in Big Ten blocked shots, in conference games only (1.1)… Iowa was 7-3 when Basabe scored 14 points or more… tallied 14 points and grabbed five rebounds in win over Chicago State… posted his first double-double of the season totaling 15 points and 10 rebounds in win over NC A&T… registered a double-double with team highs in points (14) and rebounding (10) in victory over Brown… scored a season-best 18 points at Iowa State and grabbed a game-high nine rebounds… netted 14 points and nine rebounds, and equaled a career-best with two steals in the win over Central Arkansas in just 13 minutes of action… recorded third double-double of the season in win over Boise State, tallying a game-high 11 boards to go along with 14 points and a season-high four blocks… scored 14 points on 6-8 shooting from the field and 2-3 from the free throw line, and grabbed a team-best eight rebounds in home game vs. Purdue… netted 14 points, corralled nine rebounds and equaled a personal best with two steals in win at #11 Wisconsin… notched eight points and seven rebounds in home win over Minnesota… tallied 13 points and five rebounds off the bench at Northwestern… scored 13 points, grabbed seven rebounds and rejected a season-high five shots in home win over #18 Indiana… had seven points and four rebounds in Big Ten Tournament win over Illinois… recorded eight points, four rebounds and two blocks against #8 Michigan State in Big Ten Tournament quarterfinal game… netted 15 points on 6-of-9 shooting, to go along with five rebounds and two blocks, in NIT first round win over Dayton… contributed 17 points and had a game-high eight rebounds in NIT second round game at Oregon… letterwinner.

2010-11 Honors — Named to the Big Ten Conference all-Freshman team and an all-conference honorable mention honoree by the media and coaches… 2010-11 — One of only five Big Ten freshman to start all 31 games… ranked first in team rebounding (6.8), blocks (41) and free throws made (80) and attempted (112), and second in scoring (11.0)… first Hawkeye to score at least 20 points in at least five Big Ten games since Adam Haluska accomplished the feat in 2004-05… one of only four freshmen in the country to have four or more 20-point, 10-rebound outbursts (four)… posted six double-doubles (five against Big Ten competition), the second most by a Big Ten freshman… one of only seven Big Ten players with six or more double-doubles… reached double-digit rebounds seven times, the second most by a Big Ten freshman… ranked first among Big Ten freshmen in blocks (41), second in rebounding (6.8) and third in scoring (11.0)… ranked third in Big Ten field goal percentage (.572) and seventh in blocks (1.3)… recorded double-double against Iowa State with 12 points and 14 rebounds, almost notching triple-double with seven blocks… scored 22 points, while grabbing 13 rebounds and blocking a game-high six shots, in home game vs. #2 Ohio State… registered a game-high 12 rebounds and two blocks, and netted six points in home game vs. Northwestern… notched game highs with 20 points and 13 rebounds at #25 Minnesota… had a double-double in home win over Indiana, recording 20 points and 10 rebounds, also set career-highs in assists (two) and steals (two)… recorded a career-high 25 points at Michigan to go along with eight rebounds, making a career-high nine field goals (9-11)… posted a double-double in win at Indiana, with 20 points and a game-high 13 rebounds… tallied a double-double in overtime loss to Wisconsin, recording 13 points and 11 rebounds in a career-high 37 minutes… missed only two shot attempts (8-10 FG, 3-3 FT), while posting game highs in scoring (19) and rebounding (8) in home game vs. Michigan… recorded 17 points, seven rebounds, two assists and two blocks at Illinois, including making all seven free throw attempts… netted 11 points and eight rebounds in home win over #6 Purdue… letterwinner.

High school — Team captain and all-league as a senior… averaged 13 points and nine rebounds for the NEPSAC Class C runner-up Lions in 2009-10… netted 30 points in his team[apos]s first 2010 playoff game… played for the highly-regarded New York Gauchos AAU squad during the summer of 2009.