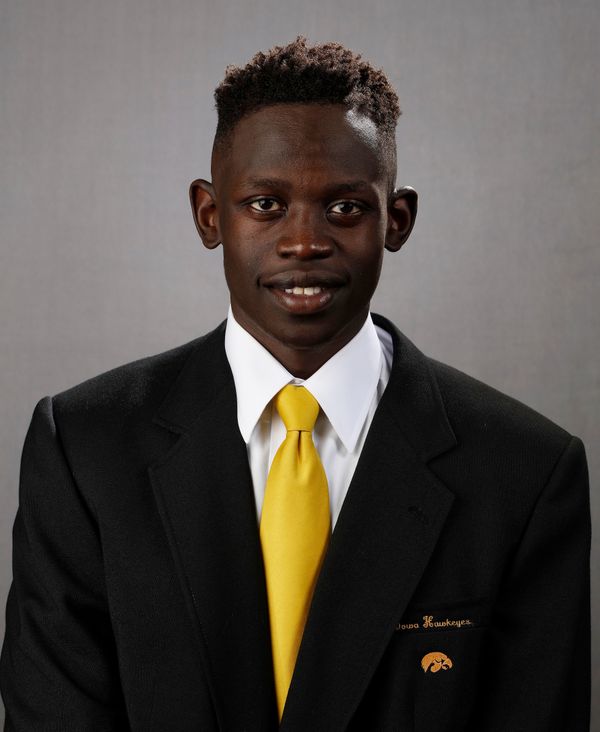 2016-17 Honors – First team All-Big Ten as voted on by league media and coaches… USBWA All-District 7 honoree… NABC All-District 7 First Team… Senior CLASS Second Team All-American… Associated Press Honorable Mention All-American… earned the team’s Chris Street Award… voted Iowa’s Male Athlete of the Year and Male Hawkeye of the Year… College 3-Point Championships Champion… two-time Big Ten Player of the Week (Nov. 21 and Dec. 12). 2016-17 — Started all 32 games played, missed two games due to injury… one of five finalists for Jerry West Shooting Guard of the Year Award and one of 10 finalists for Senior CLASS Award… became Iowa’s fifth Big Ten scoring champion, averaging 19.9 points per game… also ranked first in the Big Ten in free throw accuracy (.911) and third in 3-pointers made per game (2.6)… broke Iowa’s single-season (.911) and career free throw accuracy (.881) records… his 636 points rank seventh best in a single-season at Iowa… his 84 3-pointers rank seventh best in a single season at Iowa… scored 30 points or more five times, a total that tied for first among Power 5 conferences and third best in a single season at Iowa since 1970… became the first Hawkeye with five 30-point efforts in a single-season since Adam Haluska (5) in 2006-07… posted career highs in scoring (42), 3-pointers made (8), and FT made (12) versus Memphis; the 42 points are the most by a Hawkeye player in 40 years and ties Bruce King (1976) for fourth most in a single-game in Iowa history… poured in a game-high 35 points in home win over Indiana, bolstered by sinking 22 free throws, breaking Don Nelson’s 55-year old school record… registered four double-doubles (Seton Hall, Omaha, Rutgers, and Illinois)… made 164 triples the last two seasons (2016-17), which ranks second best over a two-year span at Iowa… ranked 37th nationally in scoring — sixth among players from Power 5 conferences – averaging 19.9 points… scored in double figures a team-best 29 times, including making 20 points or more 15 times… led team in scoring 20 times… made three 3-pointers or more 17 times… letterwinner.

2015-16 Honors — Second team All-Big Ten as voted on by league media and coaches, CBS Sports, and the Associated Press… USBWA All-District 7 honoree… NABC All-District 7 Second Team… earned the team’s Most Improved Player Award… named Big Ten Player of the Week on Jan. 18. 2015-16 — Started all 32 games played, missed the Coppin State game (Nov. 15) due to injury… ranked second on the team in scoring (16.1) and steals (40), and first in free throw accuracy (.852, 92-of-108) and 3-pointers (80-of-199)… his 80 3-pointers rank as the eighth most in Iowa single-season history… his 514 points in 2015-16 rank as the ninth most by a Hawkeye junior… his 85.2 percentage from the free throw line in 2015-16 rank as the sixth best percentage by a Hawkeye junior… ranked 64th nationally in 3-point field goal percentage (.402) and 114th in triples made per game (2.5)… made 27 straight free throws from Feb, 17 – March 18… Iowa was 11-4 when Jok makes at least three 3-pointers in a game… led team in scoring in 11 games… ranked sixth in scoring in Big Ten competition, averaging 17.3 points in 18 conference games… more than doubled his 3-point production (80) compared to his sophomore season (36)… averaged 9.1 more points per game as a junior compared to his sophomore campaign; the most points per game improvement in the Big Ten… tallied 20+ points 11 times, including a career-high 29 at Rutgers (Jan. 21) and against Illinois (March 10)… Iowa was 8-3 when he scored 20 or more points… one of four Hawkeyes since 2005-06 to average two 3-pointers and one steal in a year (Jeff Horner, Adam Haluska, and Matt Gatens)… ranked seventh in the Big Ten in 3-pointers (2.5) and sixth in steals (1.3)… made multiple triples 25 times, including 17 of the last 19 games; hit four or more triples nine times… registered double figures in scoring 26 times this season, including 17 of the last 18 games… led the team in steals nine times… scored eight points before leaving game due to an ankle injury in win over Gardner-Webb… tallied a game-high 20 points, bolstered by 4-of-6 shooting from 3-point range, in victory at Marquette … posted two 12-point, 6-rebound games at the Advocare Invitational (Dayton and Wichita State)… collected a career-high four steals and poured in 24 points, including sinking a go-ahead 3-pointer with 26 seconds left in overtime, to best Florida State… scored 16 of his 18 points in the second half to go along with a team-best two steals at #2 Iowa State… poured in 21 points, bolstered by sinking a career-high five 3-pointers, in win over Tennessee Tech… scored 19 points in victory over #1 Michigan State, adding three steals and matching a career high in assists with four… tallied 11 points, while leading the team with a game and career-high nine rebounds in road win over #14 Purdue… scored a game-high 23 points and posted two steals in road win over #4 Michigan State… connected on 4-of-6 triples, scoring 14 of his 16 points in the second half in a home victory against Michigan… led team with a career-high 29 points, while shooting 5-of-9 from behind the arc in road win at Rutgers; the 29 points ties for the seventh most by a Hawkeye during the Fran McCaffery era… scored 13 points while posting a team-high three steals in win over #22 Purdue… led team with 14 points at #7 Maryland… led team with 26 points while making a career-best 10-of-12 free throws and going 4-of-7 from distance; scored 22 of Iowa’s first 25 second-half points… led all scorers with 23 points (7-18 FG, 3-7 3-FG, 6-6 FT) and grabbed five rebounds in win at Illinois… scored a game-high 27 points, bolstered by four 3-pointers, in win over Minnesota… went 10-of-11 from the free throw line on way to scoring game-high 28 points at Penn State… led all scorers with 21 points, while grabbing six boards and recording three steals in home loss to Wisconsin; went 8-of-8 from the free throw line… netted 12 points in loss at Ohio State… had 10 points and matched a career high in assists with four at Michigan… matched a career high in points scored with 29 (10-16 FG, 4-6 3-FG) in loss to Illinois at the Big Ten Tournament; fouled out with 4:02 to play… dropped 16 points and grabbed a team-best seven rebounds in NCAA Tournament win over Temple… recorded 11 points and had six rebounds in NCAA Tournament contest against #6 Villanova… letterwinner.

2014-15 — Played in all 34 games, starting 21 while averaging seven points per game… shot at a 90 percent clip from the free throw line (37-of-41) and 42 percent from 3-point distance (13-of-31) during the month of February… reached doubles figures in scoring 11 times, including 12 against Davidson in the NCAA Tournament… made multiple 3-pointers in seven of the last 13 games… posted single-season bests in steals (19), assists (44), field goals (83) and 3-pointers (36)… scored 11 points, grabbed a team and career-high eight rebounds and blocked a shot in opening win over Hampton… scored 15 points, posting career highs in 3-pointers made (4) and attempted (6) and steals (3), in win over UMBC… scored 14 points and collected six rebounds and three assists vs. #13 Iowa State… tallied 12 points in his first career start on Dec. 22 against North Florida… netted eight points and collected a game-high two steals vs. Michigan State… contributed 13 points, bolstered by 3-of-5 shooting from 3-point range, in win at Minnesota… equaled a career high with three steals to go along with seven points in home win over #25 Ohio State… grabbed a career-high nine rebounds to go along with three assists and six points in road game at Purdue… posted 10 points and matched a career high with four assists win at Michigan… tallied 15 points on 6-of-8 shooting from the field and 3-of-4 from 3-point range, in win over #16 Maryland… scored a career-high 16 points and had four rebounds in home game vs. Minnesota… registered 11 points on 4-of-9 shooting from the field, including 3-of-5 from 3-point range, in win over Rutgers… netted 14 points on 6-of-12 shooting from the field in win at Nebraska… posted eight points and seven rebounds in win at Indiana… tallied 12 points and grabbed five rebounds in NCAA Tournament win over Davidson… letterwinner.

2013-14 — Played in 26 games… ranked sixth on the team in 3-pointers made (16)… his 34.8 3-point percentage (16-of-46) ranks eighth best by an Iowa freshman… scored in double figures seven times… made at least one triple in three of the last four games… missed only seven free throws (27-of-34, .794)… joins Kenyon Murray as the only Iowa freshman to score 10+ points and shoot 80+% in an NCAA Tournament game when he tallied 10 points on 4-of-5 shooting from the field, including 2-of-3 from 3-point range vs. Tennessee in the first round… scored 11 points and snagged five rebounds in win over UNC Wilmington… scored eight of 10 points from the free throw line (8-of-8) in win over Maryland Eastern Shore… netted a personal-best 15 points, bolstered by 3-5 shooting from 3-point range, in win over Abilene Christian… scored 14 points, shooting 2-of-4 from 3-point range in win over UTEP… tallied 14 points and grabbed a personal-best seven rebounds in win over Drake… dished out a personal-best four assists to go along with 11 points in win over FDU… equaled a personal best with four assists in win over Arkansas-Pine Bluff… scored six points and equaled a personal best with two steals at #22 Michigan State… posted three points and two assists in home game vs. Illinois… blocked third shot of the season against Northwestern at Big Ten Tournament… letterwinner.

High school — 2013 Parade All-American… first team all-state performer leading Iowa Class 4A in scoring average (23.6) as a senior, making 42 percent of his shots from 3-point range and 92.6 percent (126-of-136) at the free throw line … earned second team all-conference honors as a junior after averaging 10.2 points, hitting 86 percent of his free throws, grabbed 4.3 rebounds and made 37 percent of his 3-point attempts.. as a sophomore at Roosevelt, he averaged 18.5 points and seven rebounds and was a second team all-state and first team all-conference honoree… one of 30 high school freshmen invited to the Nike Top 100 Camp in St. Louis in 2010, and participated in the 2012 NBA Players Association Top 100 Camp… competed on the AAU basketball All-Iowa Attack team.