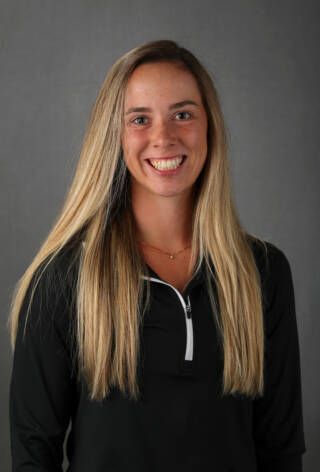 Fall 2022 — Reached the semifinals in doubles with partner Marisa Schmidt at the Intercollegiate Championships… third on the team in doubles wins (5)… won four singles matches.

Hawk Item —served as the director of marketing and public relations for the Madison Keys Court of Dreams Celebration of Tennis in Charles City, Iowa, in July 2022.

Spring 2022 — recorded a 9-10 singles record at the No. 1, No. 2 and No. 3 spots, including five victories on court three and three on court two… concluded the season on a three-match win streak… defeated No. 43 ranked Ohio State opponent… posted an 8-13 doubles record, earning three wins at No. 1 and five on court two… Academic All-Big Ten… Big Ten Distinguished Scholar with a perfect 4.0 GPA… ITA Scholar Athlete… letterwinner.

Fall 2021 — registered a 4-1 singles and 3-4 doubles record… advanced to the Round of 16 in doubles and Round of 32 in singles at the ITA Central Regional Championships.

Spring 2020 — Had a 4-6 record in singles at the No. 2 position… had a 4-4 record in doubles… season canceled by Big Ten Conference and NCAA on March 12 due to concerns of coronavirus (COVID-19)… letterwinner.

Fall 2019 — competed at the ITA All American championships in singles and doubles… 1-1 in singles… 1-1 record in doubles.