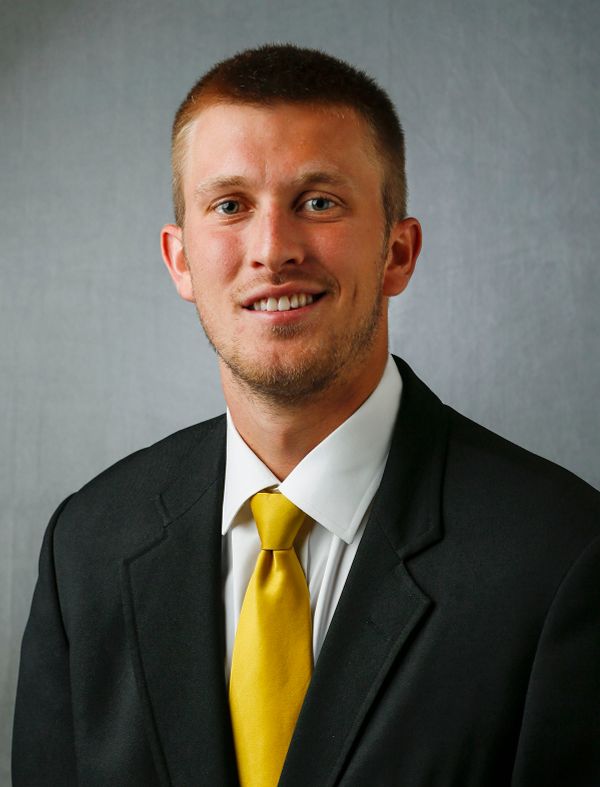 2014-15 — Team co-captain… played in 33 games… averaged 3.2 points and 1.9 rebounds per game… made a season-best four 3-pointers at Penn State… did not play against Maryland due to illness… did not committed a turnover in 18 games this season… made all nine free throw attempts… 17 assists and only two turnovers during Iowa’s six-game win streak (Nov. 24-Dec. 9)… tied a career high with four assists to go along with eight points in win over North Dakota State… grabbed a career-high six rebounds in win over Alcorn State… shot 3-of-4 from 3-point range, scoring nine points, in Iowa’s win over North Florida… tallied eight points, including five crucial second-half points, in win at #18 Ohio State… sank two second-half 3-pointers and was credited with a game-high two steals at Northwestern… made both 3-point attempts, scoring six points, while also dishing out three assists, in win over Illinois… scored a season-high 12 points, via a season-best four 3-pointers made, in overtime win at Penn State… started only game of the season and ninth of his career on `Senior Day’, registering three points, three rebounds, and two assists in home win over Northwestern… letterwinner.

2013-14 Honors — Awarded the team’s Most Improved Player Award. 2013-14 — Played in 21 games, including starting one… missed the first 12 contests due to broken bone in right foot suffered two days before season opener in practice… ranked sixth in team scoring (6.6 ppg) and second in 3-pointers made (31)… boasted a 2.7 assist-to-turnover ratio (27 assists, 10 turnovers)… shot 40 percent (31-of-77) from 3-point range; the seventh-best 3-point percentage by an Iowa junior… boosted his 3-point shooting accuracy by 13 percent this season compared to last… scored in every Big Ten regular season game except one (at Wisconsin)… made first four 3-point attempts of the game twice in his first six games back from injury: Arkansas-Pine Bluff (Dec. 22) and Minnesota (Jan. 19)… scored in back-to-back games (Wisconsin and Minnesota) for the first time since his third and fourth games of his freshman season (Northern Illinois and Creighton)… dished out two assists in five of the last seven games… made two or more 3-pointers in four of the last seven contests; sank at least one triple in eight of the last nine outings… made first four 3-pointers in season debut, finishing with 13 points in win over Arkansas-Pine Bluff… netted five points and grabbed three rebounds in home win over Northwestern… scored eight points, including five crucial points down the stretch, in road win at #3 Ohio State… tallied a season-high 17 points, bolstered by 5-of-7 shooting from 3-point range, in home win over Minnesota… registered eight points and equaled a season high with two assists in win at Northwestern… corralled a season-high four rebounds to go along with three points in win at Illinois… dished out a season-high three assists to go along with three points and a steal in home win over #10 Michigan… shot a blistering 67 percent (8-of-12) from the field, equaling a season high with 17 points, 15 of which were scored in the last 16 minutes of Iowa’s home game vs. Wisconsin… had 16 points, two assists and two steals at Minnesota… netted 11 points and collected a career-high three steals in win over Purdue… posted eight points at #22 Michigan State… letterwinner.

2012-13 — Played in 37 games… started two games (Purdue and Indiana)… ranked second on the team in 3-pointers made (42)… 42 of his 52 field goals came from long distance… 76 percent of his offense came from 3-point range (126-of-165 points)…made two triples or more 12 times… sank at least one triple in eight of the last nine contests… netted double figures six times… did not play against SC State due to injury… scored a game-high 13 points against Gardner-Webb with three 3-pointers and four free throws… scored all 12 points via four 3-pointers in the first half while also blocking a career-best two shots and matching a career high with five rebounds vs. Wichita State… went 3-of-6 behind the arc to score nine points at Virginia Tech… had 12 points and two assists against A&M-CC… tallied eight second-half points and tied career high with two steals in victory over Iowa State… made two 3-pointers in home game against #5 Indiana… equaled a season high with four 3-pointers, all in the second half, in road win at Northwestern… netted eight points, most since the Northwestern game on Jan. 13, along with tying a personal best with two steals at #23 Minnesota… recorded 10 points in home win over Northwestern… scored 10 points, sinking two crucial 3-pointers late to stretch Iowa’s lead, in a win over Illinois… made his only 3-pointer in NIT win at Virginia… letterwinner.

2011-12 — Competed in all 35 games, starting five… averaged 6.4 points, shooting 37 percent from 3-point range, and 1.7 rebounds… ranked second on the team in 3-pointers made (45) and attempted (121)… led Iowa in scoring against Creighton, Northern Illinois, Clemson, #16 Indiana and #8 Michigan State… started first career game at Penn State (Feb. 16)… scored in double figures six times, including netting 20+ twice… made four or more 3-pointers four times… 60.5% of his scoring comes from 3-point territory (135-of-222 points), which ranks third amongst Big Ten players… drained at least one triple in 24-of-35 games… scored in all but six games… netted 16 points, bolstered by 4-of-7 shooting from 3-point range, and controlled five rebounds in win over Northern Illinois… scored a team-best 14 points on 5-8 shooting from the field, including 3-5 from 3-point range, vs. Creighton… notched a team-best 15 points against Clemson, making 3-of-4 3-pointers and a season-best 4-of-4 free throw attempts; added two steals… tallied nine points in the win over Central Arkansas… led Iowa in scoring at #16 Indiana with a career-high 24 points, tallying career-bests in field goals made and attempted (8-of-12), and 3-pointers made and attempted (6-of-8)… recorded 11 points and had two assists, in his second career start, in home win over #18 Indiana… scored nine points, all in second half, at Illinois… netted eight points, including two key second-half 3 pointers in road win over Nebraska… had eight points and four rebounds in Big Ten Tournament win over Illinois… recorded a team-high 20 points, making 7-of-9 field goals, including five triples (5-of-7),against #8 Michigan State in Big Ten Tournament quarterfinal game… letterwinner.

High school — Three-year starter and a senior captain for Washington High School… averaged a team-best 21.2 points and seven rebounds his senior season… led the state with 87 made 3-pointers in 2011… first team all-state, all-conference, all-metro (unanimous) and all-area his senior campaign… 2011 Class 4A Player of the Year… selected to play in the 2011 IBCA and Eastern Iowa All-Star games… entered his senior season with a rivals.com rating of 118 in the country and considered the 36th-best shooting guard in the nation… averaged 16.3 points, five rebounds and two assists his junior campaign… tabbed second team all-state, all sub-state, and first team all-conference and all-metro in 2010… named his team’s Offensive Player of the Year, ranked sixth in conference scoring, and first in 3-point percentage (third in the state) his junior year… averaged 12 points, three rebounds and two assists his sophomore campaign… an honorable mention all-conference honoree and was named the team’s Clutch Performer of the Year and Co-Offensive Player of the Year in 2009… honorable mention all-league as a freshman… ranked seventh in the state in free throw percentage and 15th in 3-point percentage (2010)… also a member of the Iowa Barnstormers, where he was recognized on five all-tournament teams, and helped the Barnstormers win five tournaments.