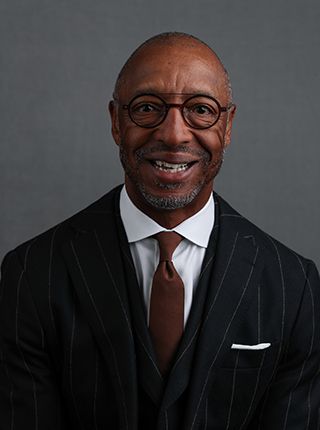 Sherman Dillard is in his 13th year with the University of Iowa men’s basketball staff bringing a wealth of expertise on and off the court.

Dillard has assisted in the rise of the Hawkeye basketball program back to national prominence since 2012. Iowa’s coaching staff has guided the Hawkeyes to 20 or more eight of the last 10 years. Dillard and the Hawkeyes have placed fifth or better in the Big Ten standings six of the last eight seasons, including a third-place finish in 2021.

In 2022, the Hawkeyes won four games in four days to capture the Big Ten Tournament title, their third in program history, which ties as third most in the league. Iowa finished fourth in the conference standings and won 26 games; the second highest single season win total in program history. Dillard was recognized as one of the Most Impactful High Major Assistant Coaches in Division I Men’s Basketball following the season by Silver Waves Media.

Iowa has had one of the most dominating players in college basketball each of the past three seasons. Luka Garza was twice named national player of the year and a consensus first-team All-America selection in 2020 and 2021, while Keegan Murray was a finalist for the Wooden Award and Naismith Trophy, earned consensus first-team All-America laurels and was named the Karl Malone Power Forward of the Year in 2022. Furthermore, Dillard and the Hawkeye staff have recruited and coached a first-team All-Big Ten honoree seven of the last nine years.

The past 12 years at Iowa, Dillard helped coach 19 Hawkeyes to professional contracts, including Joe Wieskamp and Garza, who were both selected in the 2021 NBA Draft. Wieskamp was chosen by the San Antonio Spurs, while the Detroit Pistons picked Garza. The University of Iowa was one of only two Big Ten schools with multiple draft picks in 2021.

Frontcourt players have enjoyed recent success under McCaffery and the coaching staff. The last three seasons, Iowa bigs have had unprecedented success. Garza was a two-time National and Big Ten Player of the Year, unanimous consensus first-team All-American, Pete Newell Big Man of the Year, and Kareem Abdul-Jabbar Center of the Year in 2020 and 2021. Last season, Murray was voted the consensus first-team All-America and was the recipient of the Karl Malone Power Forward of the Year Award. Four years ago, Cook became the ninth player in program history to total more than 1,300 points and 600 rebounds. Baer is the only Hawkeye to ever total more than 750 points, 500 rebounds, 100 assists, 100 steals, 100 blocks, and 100 3-pointers made. Additionally, Dillard helped mentor Jok (19.9 ppg), Garza (23.9 ppg in 2020; 24.1 ppg in 2021) and Murray (23.5 ppg in 2022) in becoming Iowa’s fifth, sixth, seventh and eighth Big Ten scoring champions in school history.

Dillard worked as a basketball marketing representative for Nike for six years (2004-10). He served as Global Camp Director, responsible for administrative and operational facets of a series of highly acclaimed camps and academies sponsored by Nike. Those camps included the Nike All-America Camp and select skills academies hosted by NBA stars such as Kobe Bryant, Steve Nash, Vince Carter, Amaré Stoudemire, and LeBron James (until January 2009).

Dillard and his wife Dena have two sons, Ben and Langston. His son Ben was a four-year letterwinner on the Arkansas-Little Rock basketball team.