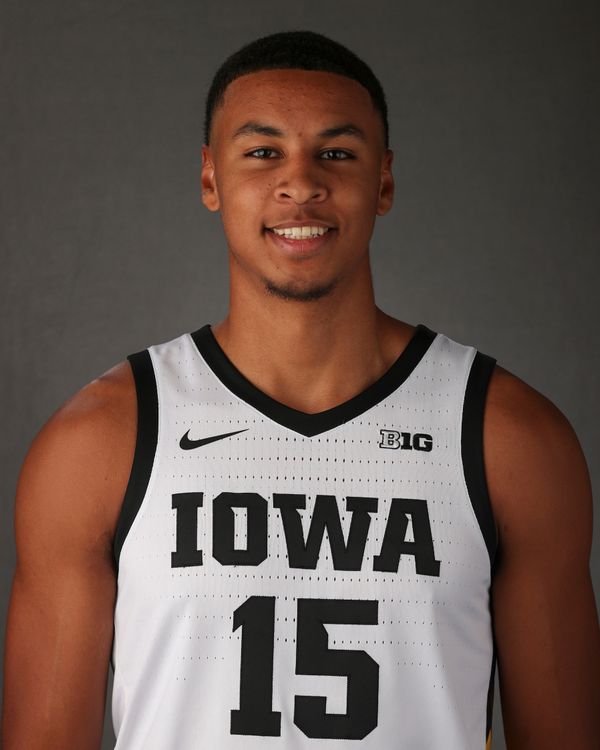 2021-22 Honors — Consensus first-team All-American… Karl Malone Power Forward of the Year honoree… finalist for the John R. Wooden Award, Naismith Trophy, Lute Olson Award and Lefty Driesell Award… USBWA All-District VI… All-Big Ten First Team (unanimous)… Big Ten Tournament Most Outstanding Player and All-Tournament Team… NABC First Team All-District… Academic All-Big Ten… Naismith Trophy National Player of the Week (Feb. 14)… six-time Big Ten Player of the Week… one of only three Big Ten players to earn at least six Big Ten Player of the Week honors since the weekly award was introduced prior to the 1981-82 season (Ohio State’s Evan Turner in 2009-10 and Purdue’s Caleb Swanigan in 2016-17)… co-winner of the team’s Academic Excellence Award and prestigious Chris Street Award… earned the team’s Top Rebounder Award. 2021-22 — Played in 35 games, averaging team bests in scoring (23.5), rebounding (8.7), minutes (31.9), field goals made (307) and attempted (554), free throws made (142) and attempted (190), blocks (68) and steals (45)… broke the school single-season scoring (822), and field goals made (307) and attempted (554)… his 303 rebounds are 10th most in Iowa single-season history, while his 68 blocks rank eighth best… amassed 822 points, 303 rebounds, 68 blocks, 66 3-point field goals, 52 assists and 45 steals… only the second player in Division I history to amass more than 800 points, 60 blocks, and 60 3-pointers in a single season (Texas’ Kevin Durant in 2007)… first Division I player with more than 800 points and 300 rebounds with a field goal percentage of 55 percent or better in a single season since North Carolina’s Antawn Jamison in 1998… totaled a Big Ten Tournament record 103 points and 38 field goals made in four games in leading the Hawkeyes to their third tournament championship and first since 2006… tied a Big Ten Tournament single game record with eight made 3-pointers made (10 attempts), in 32-point outburst… tallied 20+ points 26 times and 25+ points 16 times this season, both of which ranked first nationally… most points (822) and scoring average (23.5) ever by a Hawkeye sophomore… also ranks third in blocked shots (68), fourth in 3-pointers (66) and sixth in steals (45) by an Iowa sophomore… increased his scoring average by +16.3 points from the previous season, which is the largest points per game increase by a Big Ten player in 49 years (Illinois’ Rick Schmidt’s scoring average improved +17.6 from 1972-73)… ranked first in the country in Player Efficiency Rating (37.8), fourth in points per game (23.5), 34th in field goal percentage (.554), 46th in blocks per contest (1.94) and 51st in double-doubles (10)… his 23.5 points per game average was tops among players from a major conference and marked the third consecutive season a Hawkeye led the Big Ten in scoring (Garza in 2020 and 2021)… only player nationally to average 23+ points and 8+ rebounds… netted double figures in all but one game played (34), including reaching 30 points a league-best five times… made four or more 3-pointers three times… collected 3+ steals in six contests and rejected 3+ shots a team-best nine times… posted 27 points, 21 rebounds, four blocks, and two assists in win over N.C. Central… he became is the first Hawkeye to total 25+ points and 20+ rebounds in a game since Bruce King in 1977 and the first major conference player with 27+ points, 21+ rebounds, and 4+ blocks since Kansas State’s Michael Beasley (2007)… Murray is one four Hawkeyes over the last five decades to post a 20-20 game… he became the first Hawkeye since Greg Brunner in 2006 to grab 20+ rebounds in a game; Brunner had 23 against Minnesota on Jan. 18, 2006. Murray is the first major conference player with 27+ points, 21+ rebounds, and 4+ blocks since Kansas State’s Michael Beasley versus Sacramento State on Nov. 9, 2007 poured in a career-best 37 points in home victory over Nebraska… the 37 points versus the Huskers are believed to be the third most by any men’s basketball player in Carver-Hawkeye Arena’s 39-year history and equal the 14th highest scoring total in a game by a Hawkeye… made 15 field goals against Nebraska, which ties for seventh most in a single game in program history… combined to score 65 points in two games against Maryland… scored 30+ points in consecutive games (30 at Maryland; 37 vs. Nebraska) to become the first Hawkeye to score 30+ points in back-to-back Big Ten games since Matt Gatens in 2012… exploded for 35 points versus Utah State, including scoring 18 straight Iowa points spanning 6:08 in the first half… his 35-point effort against the Aggies was six points from the Sanford Pentagon record… scored 21 points, including a game-tying tip-in at the buzzer to send the game to overtime at Penn State… played39 minutes in a team-best five games… denied a personal-best five shots against Longwood… dished out a career-high four assists versus Alabama State… letterwinner.

2020-21 Honors — All-Big Ten Freshman Team honoree… earned the team’s Newcomer of the Year Award. 2020-21 — Played in all 31 games, including four starts… one of only five players nationally — and only bench player — to amass 200+ points, 35+ blocks, 25+ steals, and 15+ 3-pointers… scored in double figures seven times… his 39 blocks tie for fourth most by a freshman in program history… led team in blocks 12 times and steals five times… team’s leading scorer (7.8) and rebounder (5.5) off the bench in conference play… totaled 13 points, seven rebounds, four blocks, three assists, and a steal in win over Grand Canyon, becoming the first Hawkeye ever to stuff the stat sheet with those numbers in an NCAA Tournament contest… second on the team in total steals (26) and ranked 11th in the Big Ten in blocked shots per game (1.26)… rejected a personal-best three shots in five games, including win over Wisconsin in the Big Ten Tournament… amassed 13 points (5-6 FG’s, 3-4 FT’s), six rebounds, and three blocks in home win over #25 Wisconsin… two key offensive rebounds in final 2:16 in home victory over Badgers, including an and-1 three-point play (2:16) and two free throws with 21 seconds remaining… shot 50 percent or better from the field four of the last five regular season contests, including at #4 Ohio State (4-of-8, .500)… controlled a game and personal-best 12 rebounds off the bench in road win at #21 Wisconsin… started his first collegiate game at Illinois (Jan. 29) replacing the injured CJ Fredrick; netted eight points and grabbed a team-best eight rebounds… posted game-high +30 plus/minus in win at Maryland; third highest of any Hawkeye in 2020-21 (Patrick McCaffery +39 and Fredrick +33 vs. Northern Illinois)… posted personal bests in points (14) and rebounds (9) in win at #14 Rutgers; sank two free clutch free throws with 16 seconds left to give Iowa a 76-75 lead… letterwinner.