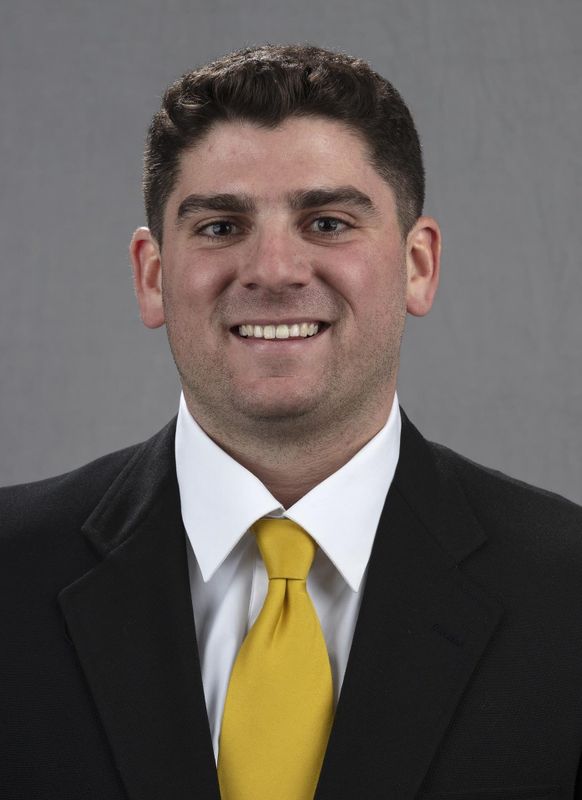 Former Hawkeye and University of Iowa graduate Jimmy Frankos is in his third season as the volunteer assistant coach with the Iowa baseball program.  Frankos serves as the Hawkeyes’ hitting coach.

Iowa’s offense ranked in the top five in nine different categories in 2021, including leading the league in doubles (93), triples (12), walks (243), on-base percentage (.385) and sacrifice flies (21).  The Hawkeyes’ defense came on strong, going seven straight games without an error to close out the year to finish second in the league in team fielding percentage (.977) and 33rd nationally.

During Frankos’ first season in Iowa City, he helped Iowa win 10 games in the first month, including posting victories over ranked foes No. 18 Arizona, No. 20 North Carolina, and No. 14 Duke.  The Hawkeyes went 2-1 at the CambriaCollegeClassic, a tournament in Minneapolis pitting the Big Ten Conference against the ACC.  The season came to an abrupt end on March 12 when it was cancelled because of the coronavirus (COVID-19) pandemic.

Frankos joined the program after spending the past three seasons at Heartland (Illinois) Community College.  He was an assistant coach in 2017 and 2018 before being promoted to head coach in 2019.  During his stint, the Hawks accumulated 119 wins, including a 34-20 record last season.

Heartland won one regular season MWAC Championship and finished runner-up in the 2018 Region 24 Regional Tournament.  During his three seasons, 29 student-athletes went on to play at the Division I level, including a program record 14 in 2018.  PJ Smith, a former Hawk and Purdue graduate, was an MLB Draft selection in 2019.

Frankos also has coaching experience in the Cape Cod Summer League, where he served as an assistant coach for the Wareham Gatemen in 2017.  He worked with some of the nation’s top hitters, coached third base, and both catchers he coached were top 10 round selections in the 2018 MLB Draft.

Frankos played for the Hawkeyes from 2013-16, where he was a three-year starter.  He finished his career with a .270 batting average with a career-best .313 average in 2014.  Frankos was a team captain and Iowa’s recipient of the Big Ten Sportsmanship Award as a senior.

The Park Ridge, Illinois, native ranked 10th in the Big Ten in batting average (.344) as a sophomore and he was a Big Ten Co-Player of the Week during the 2015 season.  During the 2015 campaign, the Hawkeyes won 41 games — the second most in a single season in program history — advanced to the NCAA Tournament for the first time in 25 years, and posted their first NCAA Regional win since 1972.

Iowa finished the season in the national rankings for the first time in program history — 20th by Collegiate Baseball, 25th by Baseball America, and 28th by the NCBWA.  As a senior in 2016, Frankos helped the Hawkeyes advance to the Big Ten Tournament championship game.

Frankos graduated from the University of Iowa in 2016 with a business management and leadership degree and a minor in sports studies.