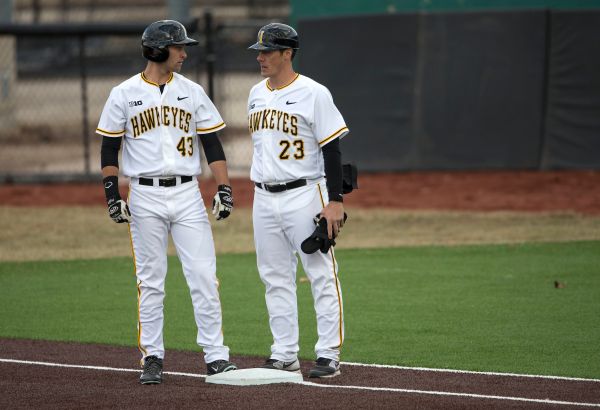 Former Hawkeye Jim Magrane is in his first season as a volunteer assistant coach with the University of Iowa baseball program. Magrane competed for the Hawkeyes from 1996-99.

Magrane has been active on coaching circuit in his career, serving as a volunteer assistant coach at Kirkwood Community College in 2011-12 and being a pitching instructor at Diamond Dreams Baseball Academy in Iowa City from 2003-08.

As a Hawkeye, Magrane was a third-team All-Big Ten selection as a senior, after going 6-4 with a 4.43 ERA. He threw a school-record 107 2/3 innings and struck out a UI single-season record 110 batters. During the 1999 season, Magrane also tied a 63-year old single-game record when he fanned 17 batters in a matchup against Western Illinois.

Magrane, who played two seasons apiece for Duane Banks and Scott Broghamer, went 11-8 during his Iowa career, finishing with 151 strikeouts in 172 2/3 innings. He signed as a free agent with the Tampa Bay Rays in 1999 and was drafted in the 33rd round by the New York Mets out of high school in the 1996 MLB Draft.

Magrane earned his bachelor[apos]s degree in communication studies from the University of Iowa in 2005.