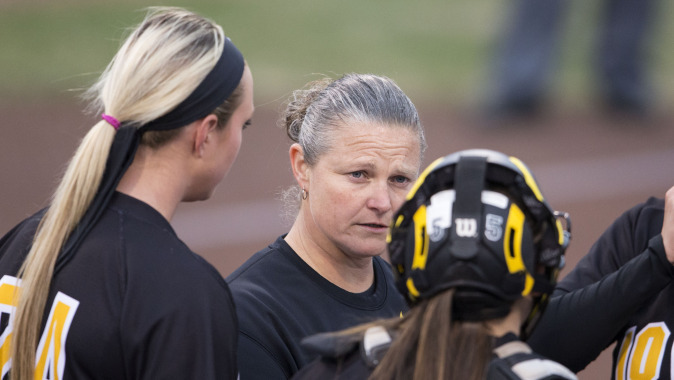 IOWA CITY, Iowa — The University of Iowa softball team started its fall season on a high note, recording a dominant 20-1 win over Highland College Friday evening at Bob Pearl Field. The Hawkeye offense used seven extra base hits, including two home runs, and strong performances in the circle to secure the victory.

“I was excited with how we started and the energy of the team going into it,” UI head coach Marla Looper said. “We took advantage of early innings and attacked them. Our mindset is to be on the attack offensively, defensively and in the circle, and it was nice to see that.”

Redshirt sophomore starting pitcher Shayla Starkenburg struck out the first nine Cougars she faced before allowing her first hit in the top of the fourth. Junior Jillian Navarrete — a junior college transfer from Butler Community College — came on in relief for the final three innings. She allowed just one run in her Hawkeye debut.

“I was pleased with Shayla, who has become that workhorse for us,” Looper said. “She’s been working in the offseason to get ready for that role and she came out and was composed. She attacked the zone, which is something we’ve been working on, and did a nice job of maintaining that. It bodes well for her and the future of the team.

“It was nice to get Jillian in there for a few innings too. It’s been a while since she’s been on the mound consistently and in the first inning she was trying to work through some jitters. She settled in for the next two innings and looked like a veteran in the circle.”

Iowa added a run in the second and eight more in the third. A homerun from redshirt junior Holly Hoffman started the rally in the third. After free passes loaded the bases, Yoways delivered a bases clearing triple. She came around to score on a Navarrate single to extend Iowa’s lead.

Following a scoreless fourth and fifth, the Hawkeyes rallied for seven runs in the bottom of the sixth. Iowa held the Cougars in the seventh to close out the contest, 20-1.

“I thought we did a really nice job in the first three innings of taking advantage of the pitcher’s mistakes, but we had a lull in the middle of the game,” Looper said. “We picked it up in the latter innings, but that is a learning lesson we had to have. We have to continue to attack on the offensive side, no matter what’s happening on defense.”

The Hawkeyes resume play against St. Ambrose at 7 p.m. (CT) on Friday, Sept. 26, at Bob Pearl Field in Iowa City.